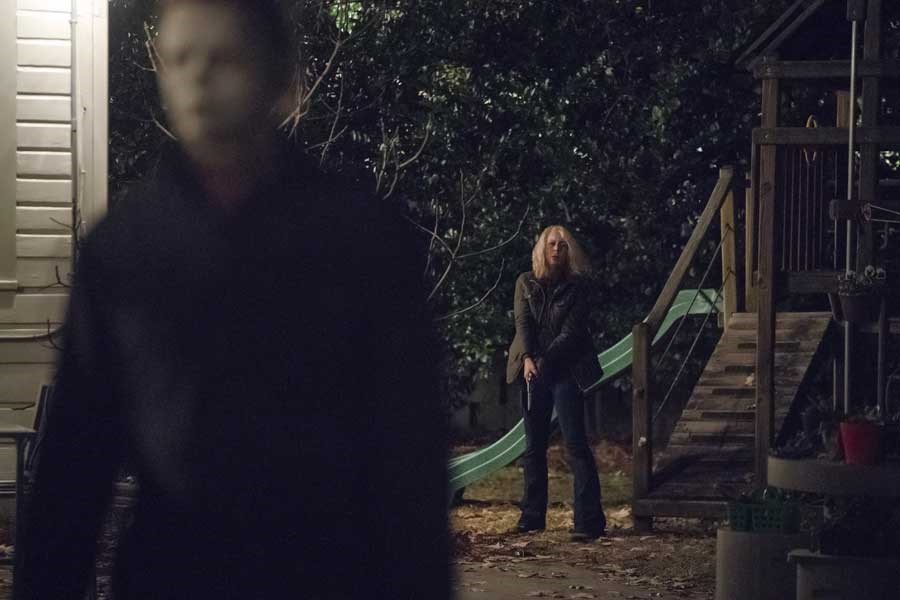 By Andrew Jenck
Halloween (2018) is a soft-reboot that ignores all the events of the prior films besides the 1978 classic, so if you’re new to the series, you can just watch the original and this one. A soft reboot is tasked with winning back fans of the franchise burned out on the franchise’s lackluster quality in recent years and newcomers of the series wanting to jump right in. It’s a tight rope walk that Halloween manages to get across but at times nearly loses its balance. For example, I would’ve preferred that antagonist Michael Meyers’ whereabouts remained ambiguous instead of being held in captivity for 40 years. However, such an approach may have been derivative of Halloween H20 and may not have allowed for exposition as it is delivered to two podcasters researching the events. What they learn, the audience learns. On the other hand, it is weird how they were able to get Michael’s mask from the evidence room for the podcast. Such conflicted feelings are present throughout the film for me.

What does work completely well is the dynamic between Laurie, played once again by Jamie Lee Curtis, and her family. Laurie is still suffering from the trauma, played by a well-committed, returning Jamie Lee Curtis and refuses to let go of the past. Her daughter, Karen, considering her troubled childhood, wishes to distance herself from the past, and by extension her mother. Her granddaughter, Allyson, meanwhile wants to amend the relationship and for Laurie to be a greater part of her life. They feel like a legitimate family going through complicated issues; best seen when Laurie intrudes on a normal dinner. There are stretches when the characters either don’t have much to do or feel forgotten about, and I would’ve preferred a few more down to earth scenes, similar to ’78, but today’s audience may find that too slow.
Director David Gordon Green and co-writer Danny McBride are primarily known for his comedic films, and there are some rather awkward inserts throughout. For example, a sequence where the granddaughter is going through a traumatic experience is intersected by two cops talking about what they have for dinner. This is likely intended to add humanity to the side characters soon to be killed off, and I do appreciate a slasher film at least attempting to have sympathy for the victims. One writing issue I’m less forgivable towards is a plot twist that only functions as a way to literally deliver Michael to the climax, and feels forced. I understand with that one character –addressing that Michael isn’t some complicated individual but just evil personified with no remorse. Hence, the blank stare mask and absence of eyes, but there could’ve been other, less contrived ways to accomplish it.
When I walked out of the theater in 2018, I was originally mixed on the film. Although entertained, I did feel it was a bit all over the place in its tone and approach to the classic. However I visited the original sequels this October, and I got a new perspective. In the span of 21 years, they took one of the most menacing horror villains put to screen and robbed him of nearly everything Carpenter and his crew had created. His ambiguity was stripped, retconned to being Laurie’s brother, so he has a clear motivation. He could be seen fully in well-lit areas. His kills became either over-the-top or dull. He would be defeated in the most embarrassing ways. The sequels are testament to how much Michael Meyers relied on superb cinematography and lighting. Here, there are long takes, steady build ups of the kills, and lighting that keeps you on edge. There was no talking or munching at my screening — a whole new generation being held hostage by the Boogeyman. Halloween (2018) is worthy-enough of a sequel to a classic and competent mainstream horror film. Although it didn’t always work for me, it worked very well for many others, and after getting their feet wet, I’m curious to see what these filmmakers have in store for the back-to-back sequels coming next year.