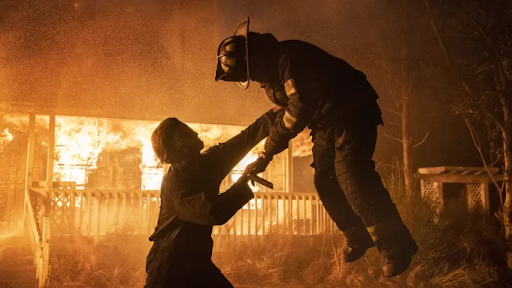 Soft reboots are a popular trend in Hollywood, allowing the studio to remake the original story while also relaunching the franchise for a new audience. This strategy makes for a good foundation to build new stories on, but filmmakers have struggled to actually continue the story and often reverting back ideas from previous sequels and having too much reverence for the original. Halloween Kills is no exception: an awkward mix of Halloween II and 4 (1981, 1988), overemphasizing the same message without expanding, and feeling more like a set up movie rather than a concrete story.

What’s at least an interesting concept is establishing Michael Meyers as the main character and seeing the impact on people. Nick Castle portrays him as a merciless brute who kills with no regard to his victims or their history with him. The writers know that Michael is at his best with the simplest motivations: he’s so straightforward in his approach that anyone can be his victim. This centrist approach could’ve been understated, as the character arcs feel too tied to Michael. Kills presents many characters having been impacted by Myers in ‘78, most of whom only encountered him for a few seconds on screen. The focus is sporadic; too wide for the audience to hone in on someone.

Many are disappointed that Laurie Strodeis sidelined, with her and Michael not sharing a scene this time. Conceptually this is actually brilliant: she’s too injured to pursue the Shape and learns how little she means to him. He kills whoever crosses his path, but never acts out of vengeance; too deranged to understand. Although present, Laurie witnessing her friends and family spiraling into madness could’ve been more of a focal point and set up the next installment in a more organic fashion. The filmmakers were likely too partial to their ideas when either condensation or better management was needed for a stronger script.

Halloween Kills can be enjoyed as a basic slasher film but isn’t the emotionally complex story it strives to be.  Michael Myers was essentially the template that all following slasher villains were built on, so it’s always been a challenge to have a continuing story. The fact Halloween has four different timelines makes that obvious.  Next year’s Halloween Ends will determine whether the series can move forward. If not, then it should’ve been left alone in ‘78, and this entry will have set up unfulfilled promises.