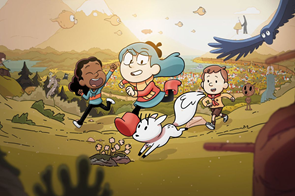 At first glance, Hilda looks like any other current Western animated series: a girl having to move from a magical fantasy world to the city where she must recognize the wonders it has to offer and learn important life lessons. This story is well-worn territory and the design at first glance looks over-simplified. However, the writers get the most from this territory, creating an emotionally resonant, at times thrilling piece.

Depicting Hilda in her original home in the wilderness, the first two episodes portray this vast wonderland that’s perfect for a child such as Hilda. As the lead character, she is earnestly passionate with a great sense of adventure and curiosity. With such observant-ness, she’s very kind, often solving problems by unorthodox, compassionate means. Her mother, referred to as Mum, recognizes and appreciates Hilda’s traits but is concerned their home is too dangerous and isolated for a child to grow up in, proven to be right throughout these episodes. A central theme is how Hilda’s kindness results in benefiting many but can be detrimental to herself, realizing they have to move, albeit more accepting than she expected.

By spending time in the natural world, the audience transitions with Hilda moving to the urban Trollberg, making Hilda more relatable. This perspective isn’t limited to Hilda, as Mum takes the effort to show her the wonders of the city and how Hilda can still apply her curiosity there, actually working towards a compromise. The writers set the stage for a series that feels complete; well-rounded. Co-stars Frida and David appear as minor characters early in the run before becoming Hilda’s friends, making them more woven into the narrative; few character aspects come out of nowhere. Telling emotionally resonant stories, the show explores more of Hilda and her shortcomings, such as demonstrating how her fearlessness can sometimes lead to recklessness. Being kids, the main cast has their own insecurities and faults they must grasp. Hilda can be self-indulgent, unknowingly putting her friends in danger for her own exploration. Frida needs to humble herself and not set up unrealistic standards while David learns to apply himself more and gain confidence. The three of them learn from one another in a naturalistic way through good pacing and character interaction.

Recurring and guest characters are also well defined; some are worse than others but nearly everyone feels believable. Each can be supporting and self-serving while staying in character. Character designs in general are fantastic. The humans’ clothing will match the characters’ personality. Hilda wears a more traditional skirt and large boots compared to other kids’ tennis shoes, showing how retro and adventurous she is. Almost every episode introduces new magical creatures, each one having their own personalities. Elves are bureaucratic and have an interconnected system. Trolls are aggressive but only when they feel threatened, such as real life animals.

The setting is well designed with much thought put in even minor locations. Red is the primary color for the background: lighter shades to depict the wilderness as warm and inviting and darker shades to show the more disturbing side; all of which let Hilda stand out with her contrasting blue hair. The lighting reflects the time of day beautifully, with softer shades at sundown while looking vibrant in the day. To emphasize how expansive the world is, wide shots will have the characters looking like elves as they explore this mysterious world. When the night is peaceful, it has a cool purple tone which will be contrasted by vibrant blue and green shades during more thrilling sequences. Music completes the scenery with its psychedelic vibe, echoing to show how expansive a mystery can be, gravitating the audience into the world, and flowing with the script. It matches the pace of the episodes and helps ramp up tension working with the storytelling as any good score should do.

Hilda can best be described as holistic: everything in the world feels authentic, continually adding to its lore while reemphasizing what’s pre-established. There’s a constant progression of the story with plot points being alluded to in episodes before they’re the main plot of another episode. The great thought and care put into the show is nearly unnoticeable for how comforting and engaging the whole series is. With its emphasis on exploration and change, Hilda makes for a good transitional piece from summer to fall as an immersive journey that is passionate and loveable.