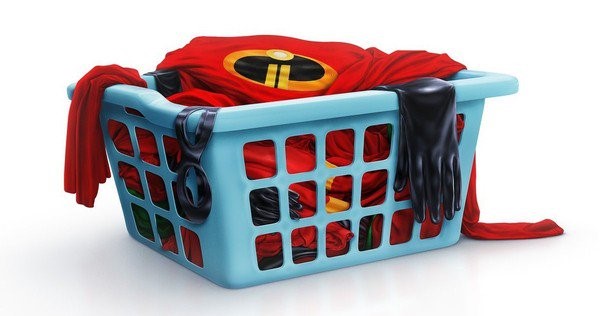 A lot has changed in the Hollywood landscape since the release of The Incredibles with the overabundance of superhero films and Pixar’s rough history with franchising outside of the Toy Story series. Hence, while I was looking forward to the follow-up to one of my childhood favorites, with director Brad Bird returning, I was a bit concerned how the film would turn out. Fortunately, Incredibles 2 proves to be a fun time at the movies, offering a deeper look into the characters and world, but with some noticeable writing issues that keep it from being on par with its predecessor.

Despite a 14 year hiatus, the story picks up right where the last one left off naturally, and creates an interesting premise from what was originally meant as a “the adventure continues” ending. The film follows two stories: Elastigirl going on solo missions to increase supers’ favorability and Mr. Incredible staying at home trying to raise the kids and deal with his infant son’s newfound abilities. While it is apparent this is an inverse of the first film, Bird does manage to make both plots refreshing enough to be enjoyable. The stay-at-home-dad trope has been run into the ground, but Bird understands which clichés to avoid and which to give their own spin to make them feel fresh. I love how the family’s powers serve as a metaphor for their personalities and put the family in believable situations with a super-powered spin on them.

Elastigirl gets more to do in this one, and it’s a welcome change; allowing for more development and showcasing her powers. It’s intriguing to see her, who was more accepting of the normal life than her husband, begin to enjoy the spotlight more but still take the job seriously. Both of these plots work well, but they don’t quite work in unison, lacking the flow and interconnectivity from the first film. The Mr. Incredible subplot doesn’t have as much bearing on the climax as it should be, and that leads to one of the glaring problems of the sequel. Apart from Toy Story, the Pixar sequels have lacked the slower paced, darker subject matter of the predecessors; Incredibles 2 can feel rushed and not as well thought out as it should be.

The characters are still likable, and the film has some interesting themes but I would’ve liked them explored a little more. I understand that today’s children’s attention spans are shorter and may not be able to handle some of the darker elements of the first, but if you’re going to make a sequel to that film, I expect a similar tone. The villain is the biggest drawback. I didn’t expect another Syndrome, but the Screen Slayer just feels like any other comic book villain nowadays. He gets the job done fine enough, but much like the rest of the film, it isn’t as thought-provoking or nuanced as it could’ve been.

Fortunately, the film is still very entertaining. The animators take advantage of the technological advancements, giving us incre-, I mean, amazing action scenes that are on par or even surpass most live action films. With so many animated films either being straight up comedies or just having, at most, generic car chases and fist fights, these sequences were such a breath of fresh air. The humor is consistently funny, with Jack Jack’s new powers offering some of the best scenes. Chemistry remains intact among the family members, allowing for some great interactions. Facial animation also contributes to the humor and character development that has made Pixar one of the leaders in animation.

The Incredibles didn’t really need a follow-up, despite the high demand, but the sequel delivers in most of the areas. I would’ve liked a little more substance but this movie still gave me one of the more enjoyable cinema experiences I’ll have all year. Despite my issues, most of them revolve around what the film isn’t and not what it is. Following up a 10 with an 8 or 9 is better than most sequels and I look forward to revisiting it again.