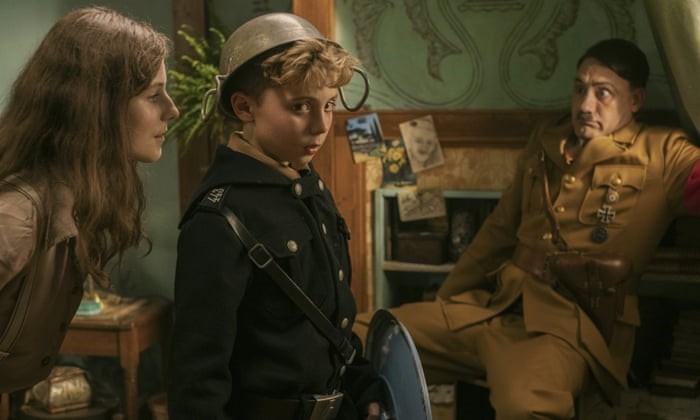 By Andrew Jenck
I’ve seen many attempts at edgy humor throughout my teenage and young adult years, and although some are humorous, in their attempt to be adult, they ironically come across as childish, with so little to say in their subject matter. Jojo Rabbit is the inverse, using seemingly adolescent humor (a la a zany Adolf Hitler) only to make a mature statement about how childish Nazism, and by extension, other prejudices are. We follow a ten-year-old boy named Jojo who aspires to be a Nazi and imagines Hitler as his goofy best friend. He’s enlisted in a youth training program, only to discover his mother is secretly anti-Nazi and harboring a Jewish girl in the house. You can probably tell where the plot eventually ends up, but it’s the journey and execution that makes it all work.

Although nominated for Best Picture and winning Best Adapted Screenplay at the Oscars, Jojo Rabbit has received a fair bit more criticism than its peers in the fact that this is a comedy about Nazis. I understand how some have issues with the pacing, the comedy not jelling with them, or can’t get into it due to real world circumstances. However, I’ve read some critical reviews citing the Nazis as stand ins for today’s hatred and further stating that it’s pointless to make fun of Hitler when he’s been defeated. However, Nazism is still prevalent as seen with the recent rise of neo-Nazis and white supremacists. Even in the pre-Trump era, a German exchange student at my high school presented how there are still a small but vocal group of Nazis remaining in the country. Personally, I’ve always found prejudice as short-sighted and immature going back to grade school, and I found the satire in this movie to be spot on.
Taika Watiati utilizes his Thor: Ragnarok earnings to write and direct the film with incredible foresight. He’ll use scenery and color grading to illustrate the state of Jojo’s town, and shows a clear eye for visual storytelling. I can’t think of many throwaway jokes, as most reveal more about the characters, time period, and its subject matter. Watiti himself plays the imaginary Hitler, and represents greater importance than just some frat-boy-humor: the film will still have fun making fun of Nazism and any similar beliefs while still being fully aware of just what a dangerous effect people like Hitler can have on youth. Other cast members such as Scarlet Johansson, Sam Rockwell, and Thomasin McKenzie commit very well.
Roman Griffin Davis, however, carries the film as Jojo, offering great talents especially for someone so young, and there’s rarely a scene without him. This character arc could’ve come across as ham-fisted or unearned, but his facial expressions and body language make it all feel so natural. I disagree with the notion that this film is too easy on the Nazis as it establishes many elements to make Jojo redeemable, unlike most of the adult Nazis. He has a loving mother as his moral support and antithesis to Adolf, is shown to be tender in key moments, and becomes more understanding of Elsa as he begins to know and understand her more. It’s not about how all Nazis can be redeemed; rather how those swept up in propaganda can see the truth and the humanity in an oppressed group.
Jojo Rabbit is a prime example of well-written comedy that not only entertains but also makes the audience think. Humor can be used more to get a laugh but also ease an audience into a serious subject matter, mocking the absurdities of our reality, only to reflect on how absurd it really is and that we must strive to fix it. Technically, the primary target is Nazi Germany, but Watiti firmly states that what is presented is very much relevant today. As Deborah Lipstadt, author of Denying the Holocaust, once said, “[anti-Semitism] may start with the Jews, but it doesn’t end with the Jews.”