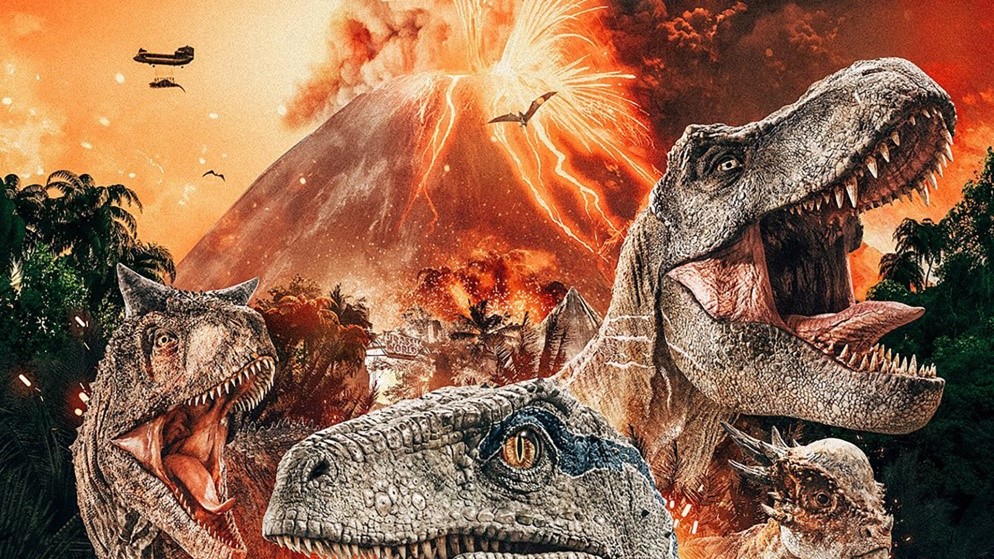 By Andrew Jenck
**This review contains spoilers.
The Jurassic Park franchise has received quite a bit of reverence among film buffs that I find unearned. The first film is a classic no doubt, but its successors have varying degrees of mediocrity, either failing to capture the wonder or not trying hard enough. As such, I don’t find another film that aims to bank off the brand name an insult in the same way as the Terminator or Alien franchises, both of which had a good sequel, so a Jurassic Park film that dives fully into schlock would not be a bad thing in my view. What I am against, however, is making a bad schlock film with a nonsensical story. Jurassic World: Fallen Kingdom has all the flaws of the previous installments with none of the few elements that worked, resulting in the worst of the franchise by a good margin.

To summarize, Bryce Dallas Howard and Chris Pratt’s characters are called for a rescue mission by John Hammond’s business partner, who acts just like John Hammond and apparently has always existed, and his secretly evil business associate who plans on auctioning off the surviving dinos to a group of clichéd corporate villains. In addition, discount-Hammond’s granddaughter discovers the a hidden room right in discount-Hammond’s mansion and learns their making another hybrid out of raptor and the last film’s Indominus Rex called the Indo-Raptor, who is just a bigger raptor. Also, discount-Hammond’s granddaughter turns out to be a clone of his now-deceased daughter, so that the obligatory “they’re not monsters, they’re animals” moral.
If you’re familiar with this franchise, you’d probably noticed this is essentially the same plot as The Lost World, but instead of the majority of the film on an island and the last twenty minutes in San Diego, we have roughly twenty minutes on the island with half of the movie taking place in discount-Hammond’s mansion. Even if this is your introduction to the series, the plot is nonsensical; to the point where trying to comprehend it can make you cross-eyed. How is this secret lab easily accessible through a dumbwaiter in discount-Hammond’s bedroom? Why is a super Raptor considered to be more effective than a sniper rifle if it still requires soldiers to aim an infra-red laser at their targets? How did Hammond overlook the volcano? Why isn’t Site B, the island from the second and third films, considered by Claire as a place to relocate the dinosaurs? All these questions are just the tip of the plot-hole-filled iceberg.
A problem that has plagued this series is its portrayal of the creatures. Fallen Kingdom only exemplifies this flaw as we are supposed to care for Blue; a raptor cared for by Owen, despite being shown as a vicious creature in both Jurassic World movies. Worst yet, the daughter releases the dinosaurs because she’s still alive despite being a clone, ignoring all the damage they’ve done. I understand that the hybrids are meant to be seen as the real tampering with mankind but that’s what the cloned dinosaurs were originally meant for. The hybrids just come across as a gimmick to push toys and retread on old ground.
Some elements work…to an extent. Howard and Pratt come across as likable enough. There are some great shots, though they don’t amount to anything. The effects are mostly look great, with nice mixtures of practical and CGI. Finally, the idea of dinosaurs running rampage through the country has potential for the next installment, but therein lies the biggest problem.
Fallen Kingdom is nothing more than a transition-film meant to lay out all the pieces for Jurassic World 3 without putting anything together. The pacing is choppy, there’s no sense of thrill, no character is developed, and there so many contrivances that fry my brain. Not only is this the worst in a diminishing in quality franchise, but a contender for the worst blockbuster of this year, and I don’t think I’ll be coming back again.