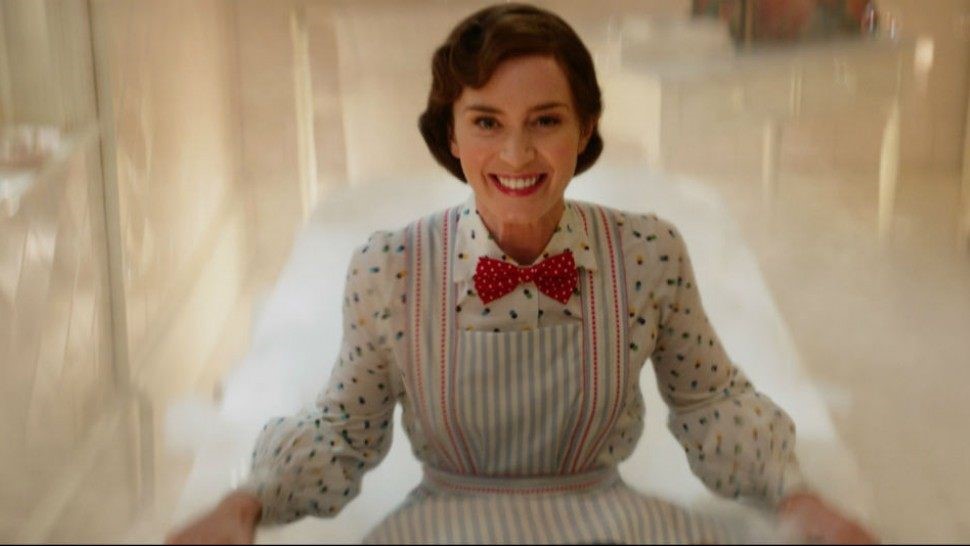 By Andrew Jenck
In the midst of Disney modernizing their classics, making a sequel to Mary Poppins, on paper, is the most cynical. Yes, I am aware that the original book had sequels, but the film itself was so complete and left little room, if any, for improvement. In addition, it’s been proven that the studio is better off building upon Walt’s legacy rather than replicating it. So, is this coasting off of nostalgia, or genuinely bringing the magic of the original back? Yes.

With almost an entirely new cast, the film takes The Force Awakens route by following a similar structure of its predecessor to invoke the childlike wonder of the audience. Poppins returns to Jane and Michael Banks all grown up and in danger of losing their house, with it being the Great Depression. In order for pseudo-sequel-remake-hybrids to work, the characters need to serve similar but also different roles, which the film pulls off very well. Emily Blunt makes the titular character her own while still retaining the same charm of Julie Andrews, with her tone of voice, posture, and body language. The children are really good, being more headstrong this time around. Michael thankfully retains the experiences he learned from the first movie; he’s more sympathetic as a man in a stage of confusion and stress. The one character who falls into repeat is Lin Manuel Miranda as Jack who’s charming but just feels like Burt if he never challenged Poppins- and I just lost all of the Hamilton fans.
The songs also work to a good extent, almost all of which are spiritual successors to the original’s soundtrack. Broadway writers Marc Shaiman and Scott Wittman capture the Sherman Bros. sound and feel very well with some clever lyrics that nicely compliment the scenes. The set and costume design matched with the choreography are also top notch, allowing for immersive musical numbers, but held back by Rob Marshall’s flat direction. Despite nailing the tone, he shoots everything as if it were a stage show, which may appeal to some, but I want my cinematic experiences to be well, cinematic.
The weakest link, however, is the script. Much of your enjoyment will most likely come from the song sequences and smaller character moments because this plot is full of clichés. Because this is follow up to a classic attempting to appeal to a new generation, we now have an evil banker hell-bent on getting the Banks’ house, who’d twirl a mustache if he had one. I know this was true to the times and it attempts to replicating real life now, but then again why did they ignore minority suppression of the times by having a black lawyer? Besides, it doesn’t mesh well with a film that has dancing penguins and a bathtub that leads into the ocean. Worse yet, the whole ordeal ultimately ends up being pointless. I do like how it eventually leads to a nice follow up, but it could have been reached with less contrivances.
Much of its themes could’ve been handled better, as nuance is not this film’s strongest suit. The songs spell out the lessons and much of the story keeps bouncing from bombastic song to another bombastic song. Modern family films irritate me when appealing to children’s short attention spans, as slower, more intimate moments can teach them patience and the appreciation of atmosphere. Nothing here is as nuanced as Burt’s discussion with Mr. Banks, or as atmospheric as Mr. Banks’ long walk. I get the impression that the script was written around studio mandated bullet points of what would make a safe film and then leave it up to the actors and hands on crew to make it work.
Still, the fact that the filmmakers were able to make a pretty good follow-up to Walt Disney’s masterpiece is a tremendous feat. There is a clear effort throughout, moments to be swept up in childlike wonder, and the ending does seep into my cold, withered heart and suppresses my criticisms. But seriously Disney, don’t ever make a Mary Poppins 3.