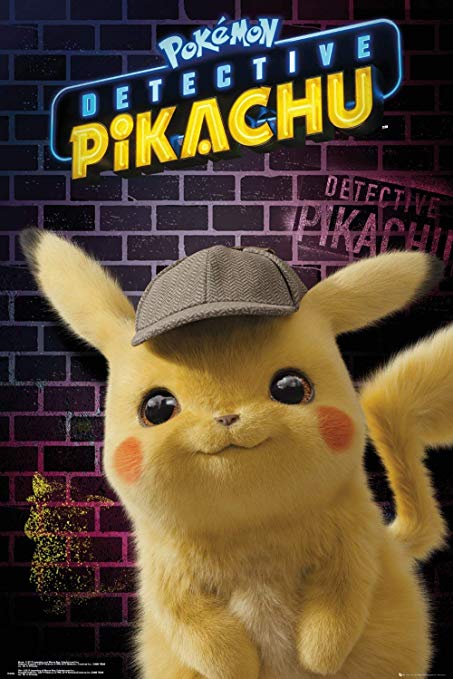 By Andrew Jenck
Pokémon: Detective Pikachu takes a different approach from other video game adaptions, being based on a spin-off title of the same name while also being a wholly separate entity from other iterations. Although its premise seemed off-putting at first, the film manages to be competent. It has humorous gags throughout, solid pacing, good world building, chemistry between the actors, and nothing really else. Detective Pikachu never fully transcends the material and tropes, resulting in a fun adventure, albeit one that does not live up to its full potential. It should be noted that this comes from the director of Shark Tale and Jack Black’s Gulliver’s Travelers and one of the screenwriters from the Jurassic World movies; hence the script and direction feel like they’re not taking full advantage of the material.

Perhaps the most impressive aspect of the film are the special effects. Making realistic versions of hand-drawn characters is a difficult task, as you are working with a different medium and are going to be bound by restrictions. Go too cartoony and it loses its realism. Go too realistic, and the characters lose their visceral charm. The SFX team, however, has found a great medium by employing 3D on set and trained puppeteers to assist in the post-production of the creatures. Animal experts were also consulted, making the Pokémon move more naturally while still maintaining enough of their cartoony gestures. Another aspect to attribute to this is the general tone the film establishes. The world created feels lived in, and by establishing a city where Pokémon and humans coexist, it allows us to see the interaction and how they function in the world.
Ryan Reynolds is charismatic throughout, managing to not come across as a PG Deadpool as I feared from the trailers and giving as much effort into role as a live action one; something that is rare among celebrities. Justice Smith is fine, as his character is the typical kid who doesn’t know his place in life with daddy issues, and his performance never goes beyond that. All of the humans are just serviceable, really; people came from the Pokémon and the film gives you just that. The variety of the Pokémon however, is restricted, as almost all were revealed in the trailer, likely from the amount of effort put into the effects.
The biggest problem with Detective Pikachu is its restraints. Detective films have such a set of tropes that you probably know about them even if you’ve never seen one. The film’s attempts to avoid these pitfalls with the use of Reynolds’ self-aware humor, but certain scenes, are clichéd and played without any sense of irony. Ultimately, the story still comes down to the tropes without ever rising above the material. This could’ve been done if the screenwriters reworked the tropes or if the director added more panache to the scenes, but they really don’t. In addition, the action scenes aren’t all that much to write home about. Apart from the climax, all of them are chase scenes and/or avoiding something. They’re fine and enjoyable, but they don’t make full advantage of the Pokémon’s abilities.
Pokémon: Detective Pikachu is a cute adventure that will please fans, kids, and newcomers alike. I know that some were hoping for a more ambitious take, but all it is a nice, matinée film for families. This is definitely not as good as it could’ve been but hey, that’s blockbuster filmmaking of the 2010s: have a novel idea that will be different enough from the competition while hiring a competent enough crew who won’t challenge the studio.