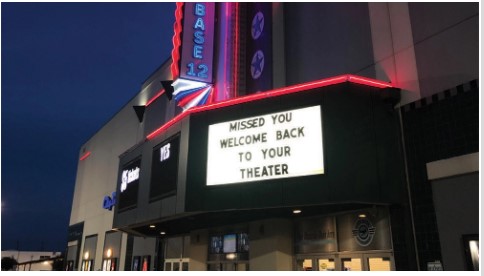 By Andrew Jenck
After numerous delays, Tenet is finally out in theaters; the first major release during the pandemic and currently showing. Tenet is my most anticipated film of this year, Nolan is one of my favorite filmmakers working today, it was the first film in years I planned to watch in IMAX, but I will not be seeing it in theaters. Sometimes it’s healthy to skip a good movie — it’s because of the coronavirus. You’ve probably already made up your mind about COVID-19, and how seriously you want to take it. For those disappointed by my announcement, at least be open to what I have to say about the matter and how I’ll approach new releases at this time.

I am a 24 year old man in excellent health who can run 90 miles per week and who could easily recover from COVID. My general safety isn’t the concerning factor here; it’s the health of others. As a film critic, many value my opinion on the film industry, so if I did endorse returning to the cinemas, I could lead high-risk individuals and asymptomatic people into an unsafe area, leading to more infections and deaths. One of my jobs is at the library where I serve many senior citizens, so no matter how socially distanced I am while wearing a mask, I could still pose a risk to those individuals the more public gatherings I go to.
Furthermore, the cinemas’ handlings of COVID have been less than satisfying, to put it lightly. I haven’t been to Tillamook Coliseum since March, but the county’s COVID cases have been less severe, and knowing its management, I trust them to run something safer, albeit not ideal. Regal and AMC, on the other hand, have done a poor job in handling the situation. Employees don’t feel safe, social distancing isn’t properly maintained, and masks can be taken off while consuming concessions. The latter of which only invites irresponsible behavior.
I did consider making Tenet my one exception and with any future releases, I would find other, safer alternatives. However, Warner Bros. current approach to the pandemic has put me, and many others, up in arms. Nolan is a highly successful filmmaker for the studio, so it makes sense to comply with his wishes and release his film for the intended theatrical experience. While I do still admire Nolan as a filmmaker, I have to question how seemingly blind his dedication is. Film critics, in order to review the film, must see it in the theater; no accommodations. Not even drive-ins can show Tenet unless that same area has its indoor cinemas open. I agree that indoor theaters offer the best experience, except many can’t experience it right now.
To be fair, this may be only a symptom of WB’s management, as its parent company AT&T is experiencing financial troubles. Its DirecTV subsidiary is losing subscribers, HBO Max got a rough start, and is burdened with an estimated $152 billion in debt. While Sony, Paramount, and Universal essentially skipped this year and Disney may release its films via premier access, WB is striving for a continual cash flow. Hence, they released Tenet when it was relatively safe in Europe, and parts of the U.S. and China. They likely concluded that even with less of an audience, less competition would make up for it, but after delaying Wonder Woman 1984 to prevent cannibalization, the executives may already be regretting its decision.
The closure of cinemas, and COVID-19 as a whole, hit me hard. Not going to the movies has likely decreased my attention span, and the uncertain future of the film industry took away my motivation to write. It’s frustrating that there’s still no solid end in sight and the theaters should’ve gotten some sort of bailout months ago, but we need to reduce the spread of the virus as much as we can. I do feel I haven’t done my part during this pandemic, as I should’ve provided more content that people could enjoy in these dreary times and keep people more up to date; for that I apologize. In the meantime, I will update when Tenet, or any other films will have safer alternatives, and work on establishing a solid release schedule. Stay safe everyone. May you continue to have your own cinematic experiences.