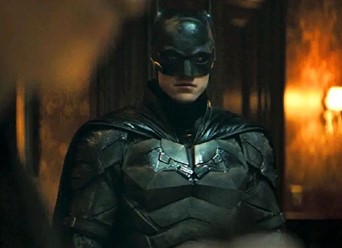 By Andrew Jenck
The character of Batman draws a variety of interpretations, including a one percenter making crime and poverty worse, who’s appeal is greater when he resorts to lethal action, or one-note character that broods with no empathy. Such is the case with any franchise that’s as omnipresent as Batman, and superhero properties in general. It’s hard not to be fatigued with the overexposure of the character. Matt Reeves, however, presents a detective noir story of embracing one’s trauma and channeling it to create something hopeful, encompassing what made Bruce Wayne such a compelling character to begin with.

Robert Pattison plays a younger, recluse crusader that terrifies criminals but apparently has little impact on the systemic issues causing crime. Through the course of the film, he discovers elements of his past and Gotham’s corrupt system that challenge his motivations. The script manages many moving pieces and character arcs by having Batman and the themes surrounding him as its center-point. The Riddler seeks his own justice by killing corrupt politicians and exposing their crimes while Catwoman grieves her own personal losses and seeks vengeance on the criminals responsible. Both have every right to be angry, but their motivations are too self-serving. Batman learns through both of their actions and within himself that hope, not hatred, inspires change. To act out with vengeance is self-serving.
Perhaps the greatest strength of The Batman is the filmmakers’ attention to detail. Costumes reflect the characters personalities, the Gothic atmosphere sets up the world with just a few panning shots, and sound editing shows the brutality and commitment of Batman in the action scenes. It’s still very much a popcorn flick, not an elaborate arthouse project but still very nuanced. The action is exhilarating while being character driven. Dialogue exchanges are humorous throughout, easing the tension while still being tonally consistent.
The Batman is not the most unique blockbuster, as some ideas and visuals feel too repeated at points. Certain scenes rely too much on monologuing especially when the film elsewhere does such great visual storytelling. Nevertheless, these are only small gripes for what is otherwise a solid core. The Batman may not be the most unique film, but Matt Reeves takes note of Batman’s online criticism to not “fix” the material but contextualize Batman’s true essence. He’s not just a vengeance, he’s inspiration. Driven to protect others from the pain he endured, even at the expense of his own mental state. To have a blockbuster that has a dark tone but with an uplifting ending is well appreciated, and I hope it continues through the rest of the franchise.