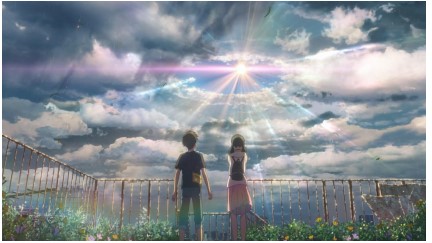 By Andrew Jenck
We are constantly reminded of the drastic impact of climate change, thinking how we’re responsible, how we could’ve prevented it, or for some being indifferent. It can especially be hard for younger people who will witness these impacts throughout their lives, as seen in today’s film Weathering with You. With ambiance and grit, Director Makoto Shinkai contextualizes climate change in an interpersonal story accompanied by excellent visuals and score providing an emotional experience that forces the audience to embrace our harsh realities to find peace.
The film follows a sunshine girl named Hina who can bring back the sun for small increments to a nearly flooded Tokyo with rainfall that makes the northwest coast look like Death Valley. She meets Hodaka, a runaway, who convinces her to use her talents as a business to help her support her brother in the wake of their parents’ passing. However, with each time they affect the weather, they face dire consequences. An obvious allegory though it may be, the filmmakers key in on adolescent anxiety and brashness beautifully. Anime is great at capturing these highly detailed, but nuanced expressions that give the characters life. Side characters provide a lot of charm, reflecting our main leads to see the story’s themes at different angles.
Tokyo itself feels alive with its citizens reacting to the events of the narrative. When writing an interpersonal story, it always helps to personify the world, showing what the leads are living through and how their actions affect it. The world has a great balance of realism and surrealism; the technology and buildings are highly detailed while the sun will shine at implausible angles. The sun is portrayed as a godsend, so anytime you see it feels like a miracle in of itself.
As depressing as winter weather can get, I’ve come to appreciate the rain in its own way; sounds when the drops hit the ground, how they flow on objects, and their interaction with wind can give a stimulating experience. Anime is perfect at this type of visceral with personifying the rain as vicious and unyielding yet fluid and graceful. The sound editing in general is excellent, pairing the animation with a reverse piano to give an unnerving vibe. RADWIMPS provides both the score and vocal songs incorporating motifs throughout the whole soundtrack. Despite the Japanese vocals, the songs still invoke an emotional response, though I do appreciate that the main song has an English version. “Is There Still Anything Love Can Do?” brings home the themes in such a powerfully visceral way.
As well paced as the film is, I started to feel the length during the climax. I’ve noticed many slice of life animes end with some sort of race against the clock with the obstacles only appearing late into the movie. One rom-com series parodied this trope, having stained it for me. At times
the voice over narrations can feel pointless, especially given how strong the visual storytelling is. The blending of hand drawn and CGI animations are awkward at times, but these are all minor flaws for an otherwise solid experience.
Weathering with You was one of the theatrical experiences before COVID, almost foreshadowing the feeling of burdened with unrelenting circumstances that the pandemic and last fall’s forest fires have given most of us. However, we don’t have to shroud away from it. Just because humans and nature intertwine doesn’t mean nature itself has to reflect our mood. We are capable of finding peace and love in the midst of seemingly dark times by embracing our actions and learning to live with them. Maybe it is too late to stop climate change but that doesn’t mean we can’t find the beauty within it.