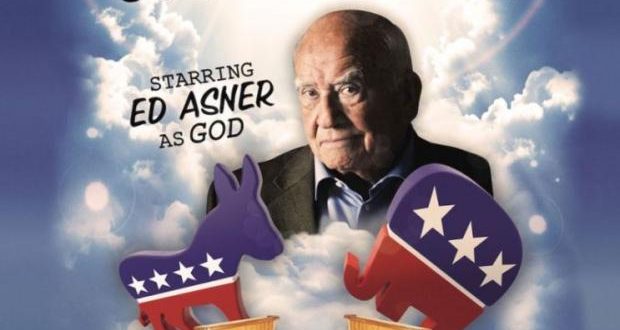 Newport, Oregon – Actor Ed Asner, who played Lou Grant in The Mary Tyler Moore series, is scheduled to perform at the PAC this time portraying the Supreme Being in the political comedy “God Help Us!”
The Donald Trump-Hillary Clinton debates of summer 2016 inspired playwrights Samuel Warren Joseph and Phil Proctor to write the play. It premiered in Chicago in August 2018. Mr. Asner keeps the script lively and relevant with timely updates.
Billed as “a political comedy for our times,” the 90-minute stage show centers on two opposite-leaning pundits who are transported to purgatory by the Supreme Being himself for the purpose of debating today’s political and social issues.
Outspoken Asner is the real-life model for the cantankerous, acerbic character of God.

The playwrights’ God is indeed Asner-like, a cantankerous, sarcastic figure openly offended by what American political leaders have done to the U.S. The play imbues him with deity-like wisdom, qualities that emerge as God offers his take on the Bible and on the origins of the universe and humankind.
Mitch Levine, the show’s director states that the play “exposes both the foibles and the potential of humanity. Both political camps will feel equally celebrated and castigated by Asner’s God. The character is an equal opportunity proclaimer and challenger whose acerbic approach to circumstances really links to the idea that we should all be doing better.”
In the process, “God Help Us!” makes the same appeal to everyone regardless of their political persuasion: that if we’re to survive, we must listen to each other.
If politics and religion are among the most combustible topics, then “God Help Us!” must be dynamite!
Asner’s daughter Liza Asner is the show’s producer. Two local actors, Marc Maislen (New Visions Arts) and Darcy Hogan (Red Octopus Theatre Co.) will play the roles of Larry and Randi, two politically opposite media pundits who were a couple in college. Kylie MacDonald and Cole Theodore play the role of angels.
Proceeds from “God Help Us!” will benefit the PAC’s Entertain the Future! Capital Campaign and specifically be used to help fund renovations to the newly named David Ogden Stiers Theatre. Previously known as the Studio or Black Box Theatre, the DOS Theatre updates will include new lighting, better sound system, acoustic enhancements and much-needed improved seating for greater audience comfort.
Reserve your tickets early for “God Help Us!” Both performances, Saturday, August 10 and Sunday, August 11, promise to sell out quickly. The cost for each of the two 7:00 p.m. performances is $50 plus ticketing fees.
Mr. Asner’s new autobiography will be available for purchase at the event.
For those who wish to meet Ed and ask him to autograph a copy of his book, plan to join us for a Meet and Greet immediately following the performances. Limited to 25 people, the Meet and Greet is an additional $20 with your purchase of a ticket.
The event is sponsored, in part, by Mo’s Seafood and Chowder, La Maison Bakery and Café and Flying Dutchman Winery.
For information on the event and to purchase a ticket, contact Bonnie Prater at: 541-574-2655; the PAC Box Office at: 541-265-2787 or www.coastarts.org.