By Edmund Ruttledge
Crews returned to Facebook’s shoreline drilling site at Tierra Der Mar and immediately ran into more trouble. Within 48 hours of returning, County Planning officials determined Facebook was not in compliance with the conditional approval permitting the drilling project in the residential neighborhood. Further, in an email message dated January 4, 2021, Facebook admitted there was activity on the site during the weekend, yet another violation of the County’s conditional approval. Nevertheless, County officials and OPRD, which has oversight responsibilities for the public beach, are continuing to approve Facebook’s return.

Facebook’s drilling project in Tierra Del Mar has incurred a series of setbacks. Last March a large “sound curtain” blew down in a wind storm as it had not been properly secured for the elements on the coast. In April 2020, Facebook broke an undersea drill and Facebook ended up abandoning industrial trash under the sea floor. Facebook delayed notifying State authorities of this event until June and was later fined by the State for this incident. Facebook was also required to conduct detailed underwater mapping, something that probably should have been required before the County approved the conditional waiver for the controversial project at Tierra Del Mar. 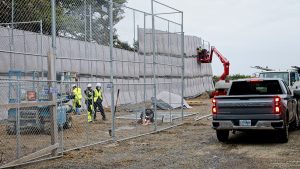 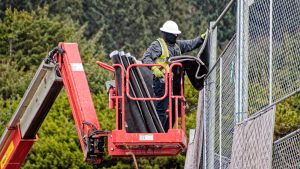 Facebook’s crew has now been seen attempting to rebuild the “sound curtain” as the wind gusts exceeded 20 mph. Large drilling machinery will soon be moved onto the site and Facebook will try again to the complete the complicated project that failed in 2020.