TILLAMOOK — Several grant-funded airport projects are underway at the Port of Tillamook Bay, including two large projects focused on improving aprons for the Port’s airport. Tillamook Municipal Airport (KTMK) is a regional airport.

“The use at Tillamook Municipal Airport includes traffic from light passenger and cargo planes, military aircraft on training missions, local pilots, vintage military aircraft, emergency medical helicopters, State Police, ODFW helicopter surveys, private jets, and Unmanned Aerial System test range use.  Most recently it served as the home base for air support for the fire up Highway 6,” Bradley said. “This funding allows us to keep the airport running smoothly for everyone who uses it, as well as look toward future growth.”

The largest project will extend the aircraft parking area, or tie down, on the Main Apron at the airport. The port has been working on the $1.5 million project for about 3 years; the vast majority of that work was covered by FAA Airport Improvement Project list grants.

“Most Airport Improvement Projects (AIP) are funded federally at 90% and require a 10% local match. However, the match for the construction of this project was eliminated, so this last phase will be 100% funded by the FAA,” Bradley said. “A portion of the local match was received through the Oregon Department of Aviation’s COAR (Critical Oregon Airport Relief) grant award, funded by an aviation fuel tax. In total, the port paid around $15,000 out of pocket for this $1.5 million project.”

She anticipates that construction will finish in late October, depending on weather conditions. 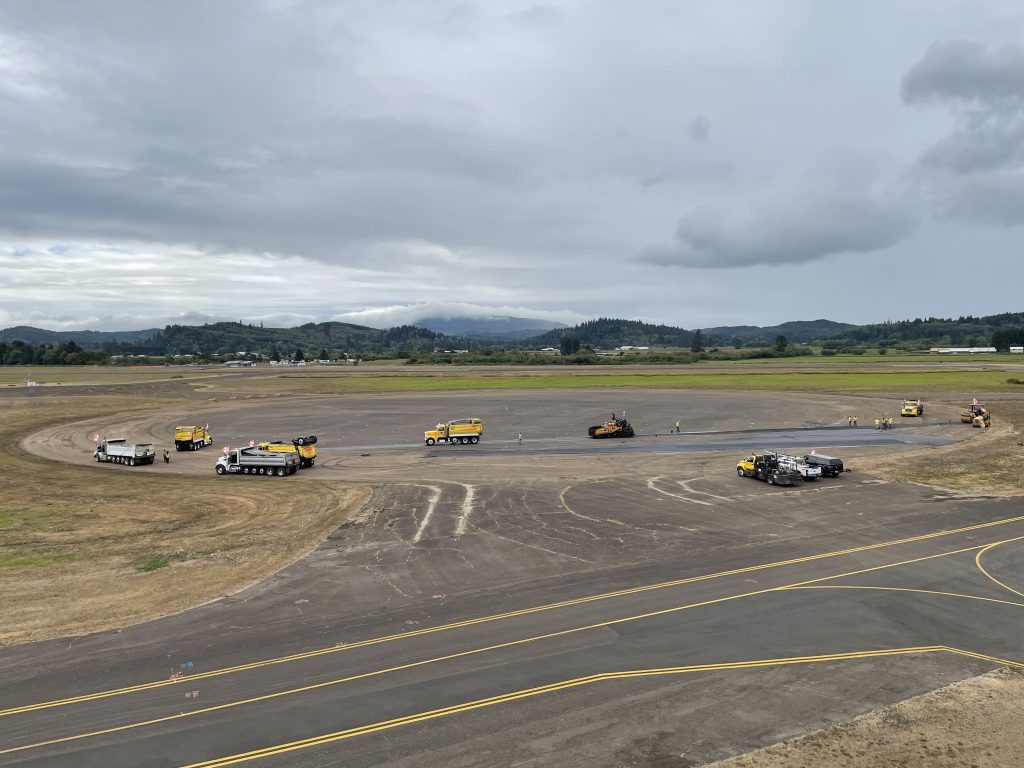 Meanwhile, Aprons A2 (the UPS circle) and A3 (leased by the Near Space Corporation) is receiving a heavy pavement overlay this year. The $2.7 million project is funded 100% through a supplemental grant process at the FAA, Bradley said.

“This will complete our last project at Apron A2, which moved the airport security fence and added aircraft tie down spaces, lighting, a gate, and a helicopter landing pad. Ultimately, the project was stalled due to rising asphalt prices and limited funding, and weather, so it had to split into another phase to wait for a full pavement overlay,” Bradley said. “The rehab project also will allow the port to improve the Apron A3 for our tenant, Near Space Corporation, which uses the area for TUTR – Tillamook UAS Test Range.”

Both projects received special approval from the FAA to use asphalt specifications from the Oregon Department of Transportation, instead of the standard FAA specifications, because the FAA specifications require a temperature for the asphalt that can only occur by sourcing it within a certain radius to comply, which is difficult with our rural location.

“There are a lot of projects happening at the Tillamook Municipal Airport right now,” Bradley said. “We are excited for their completion, and we look forward to future improvements throughout the Port of Tillamook Bay.”  The Port Board has made growing the airport a priority in our Strategic Business Plan.

The Port of Tillamook Bay covers approximately 1,600 acres, including a 200-acre industrial park, the Tillamook Municipal Airport, the Tillamook Air Museum and the 85-plus miles of railroad right of way ending in Banks, Oregon. www.potb.org