EDITOR’S NOTE: There’s been lots of buzz about North Coast Pinball – and lots of love for this new business in downtown Nehalem, for lots of reasons. The community-mindedness of owner Will Irace is just amazing. In addition to hosting a local Teen Night (coming up September 23rd), North Coast Pinball also has this amazing “Community donation” program – Community Impact – We keep a token donation jar by our exit. At year-end we’ll make a 25¢ donation for every token placed in the jar, to local schools and other community resources cash and coins are welcome too. Please tell us if you would like to suggest a local resource in need of donations. For the love of pinball and community ….

By Christy Kay for the Tillamook County Pioneer
My love of pinball started at an early age. Growing up in the 70s and 80s, arcades were common places for us adolescents to hang out, and hopefully stay out of trouble. Of course, there was Pac Man, Centipede and Tetris that quickly became popular staples at the arcades of my youth. But it was pinball that ruled my world. From the moment I first put my hands on the flipper controls and the ball started to roll, I was hooked. I spent many long hours mastering the art of pinball back then. The song “Pinball Wizard’ became the theme song of that period of my life. But, as it often does, life moves on, you grow up, you get married, you start a family, and your youth fades into adulthood and a new life.

When North Coast Pinball moved in across the street from my business, Rising Hearts Studio, I was intrigued. Pinball is not so common anymore. Video games are very different now- they have become more involved, graphics are more intense and realistic, there is a different feel to them than the games of the past. Did they really know what they were doing, creating a place that strictly holds to pinball? Would they make it? Kids today don’t really know what it feels like to pull back that plunger and release the ball into a game. It is reminiscent of a time past when life was not ruled by cell phones and devices, and the fast-paced life we have created for ourselves. 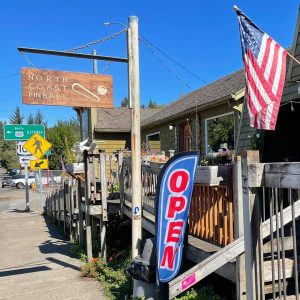 One day not too long ago, I decided to venture into the North Coast Pinball, “Nehalem’s little pinball lounge”- as they sometimes refer to themselves- wanting to feel the comfort of the past. And I was not disappointed. Walking in I was greeted by the familiar sounds of bells, sirens and knocking of the ball. The owner greeted me and asked if I would like to join their monthly tournament, which was just about to start. Sure, I said, not having touched a pinball game in 25 years. Within 5 minutes, I was registered and playing my first game with another fan. I lost. It is NOT like riding a bike and practice is needed, like most things that have worth, but practicing is the fun. I won my second game and the thrill and rush, and the pure joy of the game came back to me. It felt like coming home.
Pinball is an arcade game where you score points by shooting metal balls on an inclined playfield, hitting special targets, and avoiding losing your ball down the ‘drain’. Pinball’s roots go back over 100 years, its great-grandparent being tabletop billiards games. In the 1870s the plunger was introduced and added to the game with marbles as the ‘ball”. It was in the early 1930s that the first coin-operated bagatelle games were produced; the marbles were replaced by steel balls, and electric lights, bumpers, and bells were added. The game became very popular very quickly, and was even banned for a time, because of fear of its impact on crime, juvenile delinquency, and morality! How about that?! In 1947, flippers were introduced, and the modern pinball game was on its way to fame. With the invention of the microprocessor in the 1970s, pinball moved into the realm of electronic gaming. The 1970s saw a boom in pinball gaming and by the 1980s with the first video games coming out, pinball took a hit, and many manufacturers were worried. With the 1983 video game crash, manufacturers again focused on improvements to pinball to gain new players, and pinball became increasingly elaborate with soundtracks, lightshows, and backbox visuals. By the 1990s the arcade, a wonderland of coin operated video games, was the place to be. And though the video game became competition for pinball, it couldn’t compete with the pinball ‘experience’.
There is a certain type of magic to be found in a pinball arcade- a comradery with other fans, a vibe and feeling. Only those who know, really know. So, what is it about pinball that creates joy or makes it a special activity? It’s all about the simplicity of the game. Pinball is an activity of the senses. Of course, there is the sounds: the bells, the knocks, the sirens, the voices of the game that direct you to your next move or remind you of your objective, and even the songs, or soundtracks, that play while the game is on, each unique to the game you’re playing. The thrill of hearing the loud boom sound that comes when you hit the magic score that wins you a free game. Then there is the tactile feeling of your hands on the flipper controls, the hand eye coordination involved, and being able to control the ball and hitting your targets, getting the ball up the right ramp, or into the scoop. It’s the subtle movement of the wrists, knowing when to hit the ball, and how hard, so that it will bounce off at just the right angle to hit the shot perfectly, being able to win the most points available. The vibration in your hands that some games have when you hit the right target, as in the Godzilla game, where the whole machine moves like Godzilla himself is inside the machine. There is the gentle shaking, or rocking, of the machine as you hit the flippers as you become part of the game you’re playing, which is encouraged here (the machines will let you know if you’re tilting too much with a “warning” sound or even a lost ball). There is the sight of colored lights, and the flashing of certain parts of the playfield when hitting the right combo or multi-ball activation, and the illustrations that are the backdrop of each game. My favorite rush is multi ball, when multiple balls are in play at the same time increasing your chance of accumulating points but requiring excellent flipper skills to keep all the balls in play for as long as possible. Then there is the singular feeling of the ‘taste’ of ‘winning the game’ and being asked to enter your initials, a privilege only achieved by having the highest score among all who have played before. 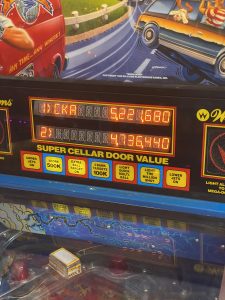 The art of pinball is not lost, here at North Coast Pinball. 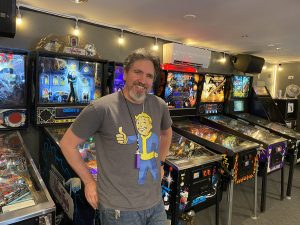 The owner Will Irace, whose business card deprecatingly reads ‘associate repair technician’ though he is so much more than that, has created a family friendly, inclusive oasis where all are welcomed. He has curated a wonderful collection of the best pinball games available, with a card on each game that outlines what makes it so special. Each one is lovingly cared for and maintained, from old standbys like Taxi, PinBot, and Whirlwind, to newer games like the Avengers and Dialed In, there is truly a game for everyone. From adults like me, who grew up with the game, to newly introduced children or the first-time playing adults, the sounds of joy are everywhere. I witnessed the delighted scream of a toddler standing on a stool, which Will has readily available for those who need, frantically beating on the flippers and yelling with happiness as they were able to keep the ball moving. I saw an adolescent boy ‘schooling’ his dad at the game next to me, while his dad watched in amazement, a new generation of fan forming, as he entered his initials for his high score win. These newer video games will never take the place of the joy created playing pinball for the first or hundredth time. The moment the ball is hit by the plunger, the spring-loaded rod that sends the ball into the game, the thrill is on. Watching the ball bounce around in between the bumpers, wondering where it will end up, and whether you will be able to keep the ball moving. Hitting a combo, or series of different moves that often involves ramps or orbit shots, just right, to increase your points. The disappointment of missing hitting the ball with the flippers and watching it move down the ‘drain’, losing that ball, as you usually only get three balls per game. Each game has its own unique goals and objectives that add to your score… and it’s all about the score, and adding of points, being able to enter your initials as a high scorer is the feeling of accomplishment that is the highlight of playing the game. But pinball is more than a game, it is a feeling, a space in time, a club, that all can join, appreciate, and love.
Slightly reminiscent of the arcades of the past, North Coast Pinball takes it all to a whole new level, with every small detail. Will creates his own tokens and token holders from the 3D printer in the corner, with a new color every month. Drinks and snacks (and even free earplugs) are available, as well as big comfortable beanbag chairs and an interesting and eclectic selection of books for reading, for those who need a respite. 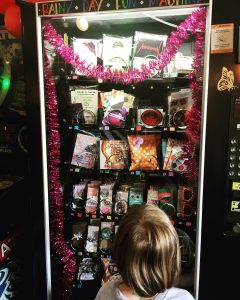 And don’t forget to check out the “Rainy Day Fun Machines” vending machine filled with local artisans’ wares. There are also kites available for sale for when you’re ready to hit the beach afterwards. “Every person has a story, and I hope, and it is my intention for this place, that it is a refuge of sorts for those who need it. That’s the whole reason I do this, and why I am here” says Will. And he is succeeding. You will find my son and I there on most days, connecting in a way that isn’t available anywhere else, all for the love of pinball. It’s a community haven that is welcoming to all. If you haven’t been there yet, you are missing out!