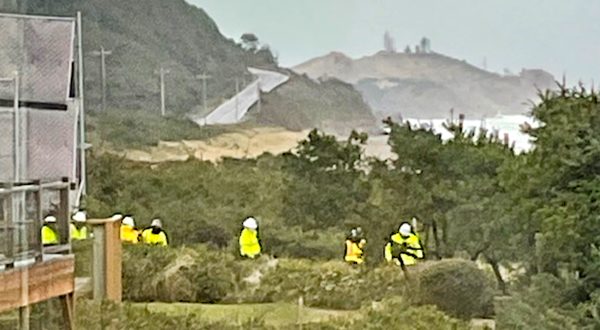 By Edmund Ruttledge, Tierra Del Mar resident
Facebook admitted to community members in Tierra Del Mar that a frac-out occurred on Monday, January 25 at its drilling site in Tierra Del Mar. A ‘frac-­out’ is the unintentional return of drilling fluids to the surface during horizontal directional drilling.” In a notification sent to many members of the community of Tierra Del Mar, Facebook stated a frac-out had occurred, “during the drilling of the pilot bore hole . . . The mud was contained immediately, the appropriate agencies were notified…” and that “[Facebook] had a call with relevant state agencies and the county today (Tuesday, January 26) where we discussed this further.”

Facebook acknowledged “drilling mud … surfaced in a 10-foot by 10-foot area.” There was no clarification of how widespread the frac-out contents may have spread under the surface. Facebook states the drilling mud, “… is a water-based mixture of naturally occurring bentonite and other additives…” which Facebook claims, “… are not classified as environmentally hazardous.”
Owing to a series of problems, Facebook has been unable to complete its drilling project at Tierra Del Mar in over a year. A “sound curtain” was blown down in March of 2020. In April 2020 a drill broke after which Facebook ended up abandoning industrial trash under the ocean floor. Facebook waited over six weeks to report the drilling trash and it was fined by the State. After its drilling failure, Facebook paused operations. Nevertheless, the Tillamook County Commissioners permitted Facebook to resume operations starting January 1 and within days the “sound curtain” blew down again. The fracout is just the latest failure in a project fraught with serial setbacks.