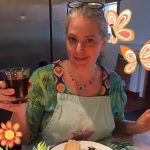 By Dana Zia, The Golightly Gourmet

I grew up in the “Cold War” era and Russia has always been this mysterious and dangerous country steeped in tradition and pride. Everything about the place is dramatic and edgy; their weather, politics, history, music and even their alphabet seems a bit menacing somehow. As I ponder all these things, the inevitable question comes up for me, what do these people eat? After all, I feel that food draws us closer and helps bridge cultures.

If you think about it, there is not a lot of Russian food to be had in our neck of the woods. In fact I think the only thing close I have had was the very interesting and delicious food at the Bosnian restaurant “Drina Daisy” in Astoria. (A must try if you haven’t eaten there yet) My curiosity aroused, I dove down the rabbit hole of Russian cuisine.
Russia is the largest country in the world and its cuisine reflects its diverse and vast cultural span but there are definitely some foods that they all seem to love and eat often. The Russian menu, not surprisingly, is made up of hearty simple foods that sticks to your ribs and keeps you warm. Foods like stewed and smoked meats, potatoes, cabbage, mushrooms, onions, fish, honey and whole grain breads to name a few. They also really love pickled foods.
In a land of harsh winters, it’s no surprise that soul-warming soups are a mainstay. They have over 7 different categories of soups but the oldest and most venerable is the Shchi, (pronounced “sch-ee”) a cabbage based peasant soup. This soup is recorded in the written word as far back as the 9th century when cabbage was introduced to Eastern Europe. Shchi is considered the national Russian dish and it is generously woven in their history.
Generally speaking, shchi is a cabbage soup with meat broth base. The peasants had to stretch every morsel of meat they had and this soup was the way to do it. There are many recipes for it as there are soup pots in Russia but the two common variations use either raw or sauerkraut. Undoubtedly the most recognizable shchi to Westerners is borscht, a hearty, colorful, beet soup. It actually came from the Ukraine but was quickly adopted throughout all of Russia and Eastern Europe.

The base of borscht is either beef or pork broth then it is filled with beets and other hearty root veggies that can last through the long white winters of Russia. After a lot of research I liked this recipe the best. The traditional recipes do not call for the beet greens but I could not help myself, I had to put them in. You know how I feel about those nutritious greens! Enjoy this earthy soup with a fat dollop of another Russian fav, sour cream. Naslazhdat’sya! (Enjoy!) 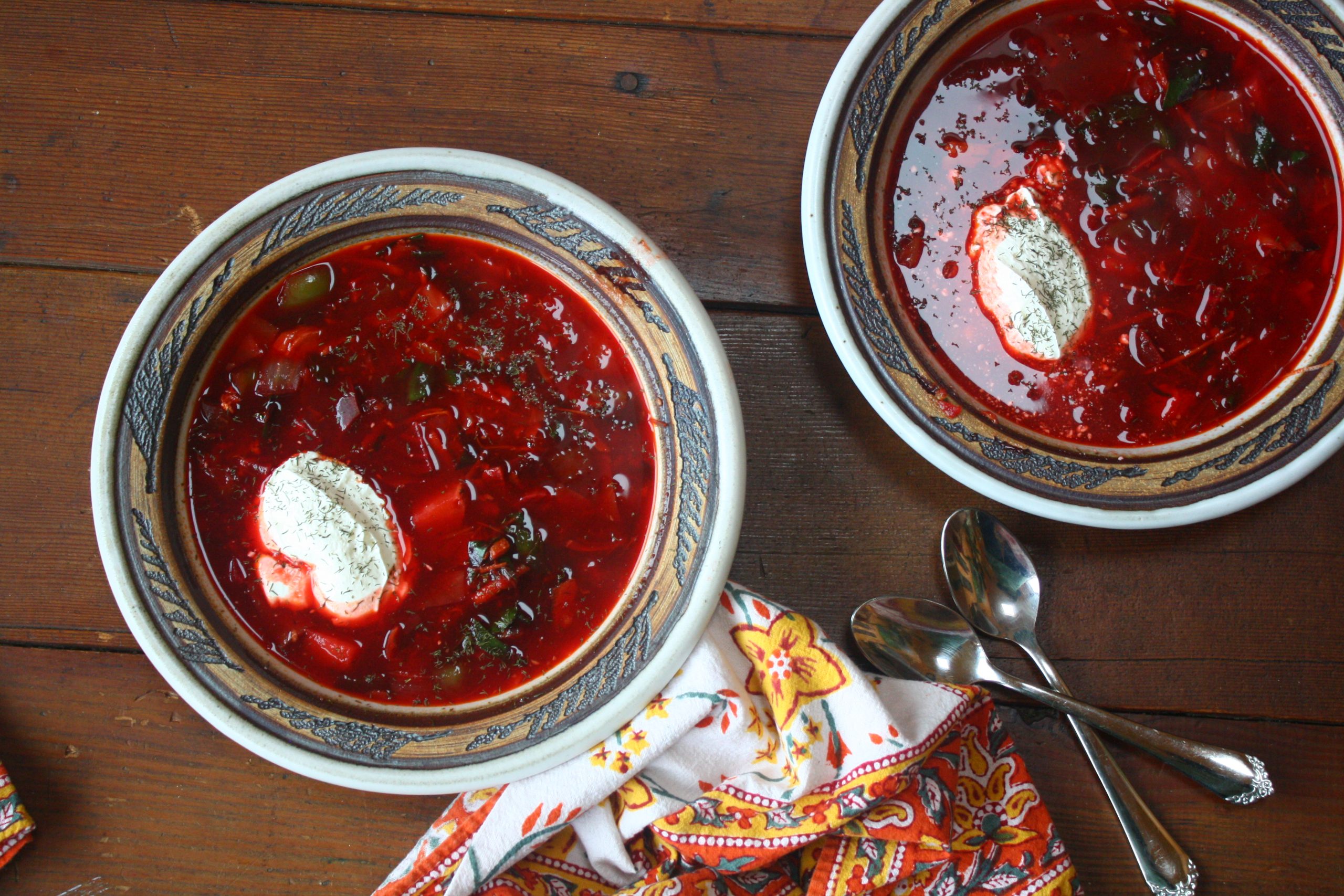 Ukrainian Borscht
I made my pork stock from a juicy ham bone left over from Christmas. I do not peel my beets or potatoes and they are wonderful that way (and saves time!) You can omit the sour cream if you are lactose intolerant but it is so much better with it!. Serves a Russian army or 8 people.

Make your stock the night before by plopping a ham or beef bone with meat on it in a gallon of water and simmering for hours. Chill in the fridge overnight and the next morning skim the fat off the broth, bring to slightly warm on the stove and then pick the meat off the bones. (By bringing the broth up to warm it saves your hands!) Put the meat back in the soup and discard the bones. (You can skip this step and use store bought beef broth with water and add some chopped beef of some sort and simmer till tender but I’m warning ya, it won’t be as good.)
Bring the broth up to a simmer on medium heat then add the potatoes, beets, canned tomatoes and tomato paste. While that is simmering, heat up the oil in a large skillet over med-high heat, then sauté the onions and carrots till fragrant (about 4-5 minutes) Add the cabbage and sauté till the leaves begin to wilt then add the bell pepper, cooking for another minute or so. Turn off the stove and let that sit till the beets are tender in the soup stock, then add the veggies to that and simmer for another 5-10 minutes.
Time to season this jewel bright soup with the lemon juice, honey, dill and salt and pepper till it tastes just right. Add the beet greens and cook about another 5-10 minutes till they are wilted then serve in big bowls with a dollop of sour cream and a sprinkle of dill alongside a salad. Priyatnogo appetite!