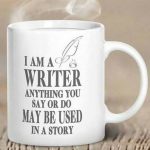 by Linda Shaffer
A few years back, my Old Aunt Wanda gave me a box filled with cook books. The box was marked with my name and hers. It should be noted that she signed letters, cards and notes with those three words, Old Aunt Wanda. As the first child of Mel and Dorothy’s brood of eight, Old Aunt Wanda spent her 90+ year- life building a web of love, respect and caring in the family Garriott. She arranged and organized family reunions, holiday celebrations and even researched and wrote a book about the family Garriott. She raised a family of her own too and had a special interest in her children’s counterparts, the generation of which I am the oldest. Yes, I am Old Cousin Linda which also means that I had some extra time to spend with my aunt. The two of us loved books of all kinds but she saved the cook books for me during a time when she was “cleaning out all this old stuff.”

When I first took ownership of these books I put some of them in my own kitchen reading collection. Two huge volumes from 1949, The Wise Encyclopedia of Cookery (home of the Wise Old Bird) and The American Woman’s Cook Book were in the first group I studied, along with some newer books about cooking in Oregon. At that point I must have gotten side-tracked and the remainder of the books stayed in the box in the closet. While cleaning out old stuff last week, I found the box, brought it out in the light and found treasure. Once I caught the familiar odor of those old pages I was hooked. I found pamphlets from the U.S. Department of Agriculture which had been stamped in red ink with the notation: From Walter Norblad, Member of Congress, First Oregon District. One was about egg dishes and the other on how to use cheese in meals. For the record, Walter Norblad served nine successive terms in Congress between the years 1946 and 1964. Apparently Walter stopped giving out free pamphlets after his first election because I only found pamphlets from 1946.
I found a coupon for the NEW Pillsbury Pineapple Cake Mix but unfortunately it expired Dec. 31, 1959. I found books from restaurants and communities around America. I found great little cook books from Frigidare, Presto and Kenmore. I found all sorts of goodies but was stopped cold when I got to the Frankenmuth Historical Association Cook Book, Volume II. I don’t remember ever being in Michigan but after reading this book, I feel like part of the Frankenmuth family. I have the 22nd printing, published in 1997 just so you’ll know I’m not the only fan of this book, originally compiled in 1977. Frankenmuth was founded in 1844 by a pastor from Neuendettelsau, Kingdom of Bavaria, along with 13 men and women from his home parish. From its early days the community had a reputation for good food and the first brewery, Cass River, was opened in 1862. It was purchased by the Geyer Brothers in 1874 and much later, joined by Carling Brewing Co.
From Summer Sausage for one hundred people to Old Fashioned Drawing and Healing Salve or Dandelion Wine, there’s something for everyone in this book. The sausage recipe was contributed by a man named William (Tiny) Zehnder. Every town has a man called Tiny and because of this I already kind of know what William looks like and just how yummy his recipe for sausage is. Tiny also contributed a recipe for Sulzen, which I think are similar to pickled pigs feet and head cheese which I don’t want to discuss here. There are German songs in this book and a whole page is devoted to German Wit and Wisdom written by Marvin Engel, D.V.M. Part of my family tree is German/Dutch and I didn’t find the humor in that part until I read this book. I’ll let you judge these little nuggets of funny for yourself.
Ich muss mei hussn um dreah – I have to turn my pants around. (go to the bathroom)
A guda Giega wat net fet. – A good rooster does not get fat. (no translation necessary)
Deah wass net wossa net wass. – He doesn’t know how much he doesn’t know. (see above)
Doa hat des freundschafd a lock kat. – Their friendship was full of holes. (yikes!)
And finally, Es bleibd sie Woshd. – It stays sausage. (No matter what you do it’s OK with me)
There you have it, some fine examples of German humor. I hope you have a good week. I’ll be here, celebrating my newfound love for the culinary world of Frankenmuth and wishing I could pronounce German words. Always remember, Es bleibd sie Woshd.