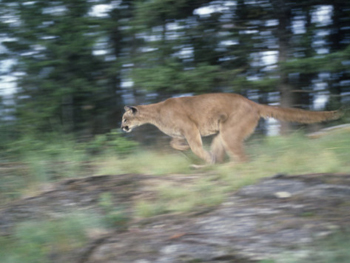 By Laura Swanson
About 4 pm yesterday (October 29th) afternoon, I heard the sirens on Highway 53, heading north, and immediately reviewed the scanner pages to see if there was any “news” about the goings-on. It didn’t take long to see a post about a “cougar attack on God’s Valley Road.” I kept an eye on the thread and saw that reports were that the hunter was conscious, breathing and being transported. Then of course, followed much rumor and speculation about the situation.
Friday morning, October 30th, during the Tillamook County leadership meeting, Sheriff Jim Horton confirmed that an individual had indeed been attacked by a cougar up God’s Valley the previous day, but had no additional details, as Oregon State Police were doing any reports or investigation. The most reliable source proved to be the “family network” and I received a text from a cousin, “Hear about the cougar attack in God’s Valley? Call me.”

I soon learned that a “cousin” had been hunting in God’s Valley the previous day and now has the mother of all campfire stories – “I survived a cougar attack.” A private person, he would prefer to share all the details with family, but understands there is a learning opportunity to share his extreme good fortune, and as his wife stated, “It just wasn’t his time.”
Most importantly, and my first inquiry: How is he? The response – “Out hunting today. He’ll call you later this evening when he gets back in.”
There are several lessons to be learned here and factors that contributed to this ideal outcome to these often deadly encounters:
#1. He leaves a detailed map, every morning for his wife of the area he will be hunting in.
#2. He had just enough signal to send a text, so then his wife knew where to send the rescue units.
#3. He is an experienced hunter and woodsman, but this caught him totally by surprise.
From his wife: “There was no warning, no sign, no sound, no brush rustling just outta nowhere. The cougar basically smacked him in the forehead, on top, side of head, catching his ear and knocked him down. By the time, he was able to sit up, all he saw was the cat’s ass and tail running away through the trees.”
His injuries didn’t require stitches – according to his wife, “There was a lot of blood and his ear is pretty torn up and sore, but he’s out there today hunting. The wounds are more like punctures.”
So the wild times with wild life in 2020 continues with the “ghost cougar” in God’s Valley giving everyone a Halloween scare and reminders about safety and precautions when you head into the great outdoors.
#1. Always let family/friends know where you are going and when you plan to return.
#2. Expect the unexpected and be prepared for it. There were many comments about “Why didn’t he just shoot it?” There was no warning, no time.
#3. We have an amazing community that responded in record time.

And I’m looking forward to a first-hand recounting around the campfire to celebrate my cousin’s cougar encounter survival – to live another day, to tell the tale – of seeing that tail disappearing into God’s Valley.