I remember the day so well, March 27th, 1964. It was my father’s birthday and we were all home to celebrate. That is no small statement, since at any given moment that could mean upwards of 20 immediate family members and all the others who had also grown up under the watchful eye of my parents. All crammed onto a single floor where the dining room and living room were really just one big room and the three bedrooms off of the back hall were tiny. Still everyone was there hanging out, playing cards, reading the paper, or snoozing on one of the couches, as my mom went about making dinner for her brood. That was my mom. Always in the kitchen and always taking care of everybody. She was in her glory.

Back then, there weren’t a lot of times yet, when the outside world intruded itself on us but on that day, in the middle of our celebration, at 5:36pm, the earth heaved a great sigh and shook itself so hard we all felt it — from Nome to Ketchikan and north all the way to Fairbanks and Barrow. We all stopped in our tracks. The floor shook and the windows rattled and everyone in our house froze. It knocked me up against my dad and then it was gone, leaving behind the eerie silent steadiness of a world snapped back to normal.

“I’m not sure,” my dad replied, “maybe it was the furnace blowing again. I’d better go look.”

“I’ll go,” my brother said as he bounded for the back door.

But it wasn’t the furnace and it wasn’t inside our house. Later we would learn that it was the strongest earthquake on record in U.S. history, the second largest ever recorded, and it had struck our state like the hammer of Thor in a rage. They said the 9.2 magnitude quake hit the Prince William Sound bringing tremors so powerful that they continued for over five solid minutes. Five minutes of the earth shaking and groaning and shifting. Five minutes to destroy the integrity of the land base that entire towns were built on. The ground rose over 29 feet into the air, creating cliffs in Anchorage that ran down the middle of what had been neighborhood streets an hour before. Then within minutes of the tremors the tsunamis followed and were destructive beyond belief, hitting as far as 170 feet above sea level. They virtually demolished Valdez, Seward, Palmer, and all those little towns up and down the northern rim of the Gulf of Alaska, like Cordova where the harbor sank seven feet during those five minutes. It was an earthquake so strong that we felt it in Southeastern Alaska, where I lived; over a thousand miles away from the epi center. It began an uneasy frightening time trying to find out about friends and relatives who lived up north. Trying to find out in real time what had happened and understand the damages, without the benefits of the internet or cell phones or instant messaging.

As my mom laid out supper that evening, she told my dad, “I think you need to say a special prayer for everyone who might be lost or gone; scared or homeless tonight. Say a prayer for all of us and for our home country,” as I crossed myself even I, at 11 years old, felt the historic impact of what this prayer was asking and why.

In the days and weeks to come, the news was filled with stories about the devastation of the Good Friday Earthquake, as they came to call it. Anchorage had rolled and heaved and for those few minutes hard land had turned to liquid and waves rolled through downtown leaving nothing but destruction in their wake. We would learn that over 139 people had lost their lives that day; fellow Alaskans who had been sitting down to supper or driving home from work were gone in the span of those five minutes or the awful times that followed in those first few days. It was horrifying to all of us. It was horrifying to the world. It was horrifying. For me, it was life changing in an instant. I would never again have the innocence of someone who has never survived a close call; a brush with mortality; a glimpse into the bottomless pit of having no control. My life would become marked by the chapters that came before and the chapters that would come after.

When the shaking stopped, I looked at my dad, seeing the shock and dismay on his face, I remember feeling bad that this tragedy had happened on his birthday. All the joy had gone out of the room, sucked away by the trauma of our new reality. The constant quiet drone of the never-ending news on the television and radio reminding us that this amazing place where we lived could open up and swallow an entire town, take cars by the street full down into crevasses that had no bottoms, and toss fishing boats into front yards over a block inland. We were used to the vastness of Alaska but learned in those moments of the all too real powers of earth and water first hand.

When it was finally over though, as is our way, Alaskans everywhere came out of hiding; looked around for where they could help and began putting our state back together. It took time, Valdez would have to move their entire town two miles down the beach. It would take years for Anchorage to rebuild its downtown core and infrastructure. Even then the scars would remain for decades to come. But in the end, we reclaimed our place and knew that eventually we would be okay. We would rebuild. We would persevere. We would stay and continue to make our lives there in that wild tough land of the midnight sun that we called home. 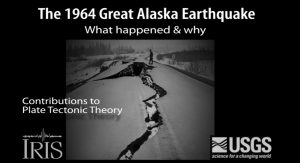 From the National Tsunami Warning Center:  On March 27, 1964, Alaska was devastated when the second largest earthquake ever, a M9.2, occurred in Prince William Sound. The ground shook for 5 minutes, multiple landslides occurred, and tsunami waves engulfed coastal communities. The impact was profound.
Why did it occur? When will it happen again? Learn the answers to these questions and more, with this commemorative video produced by U.S. Geological Survey (USGS).
Recapping the event along with striking historical footage, this video also highlights scientific advancements made since 1964 which have helped to mitigate the impacts of such natural disasters for the future. One of these advancements was the creation of yours truly, the National Tsunami Warning Center. Located in Palmer, AK and serving you 24/7, 365 days of the year! #GreatAlaskaEarthquake