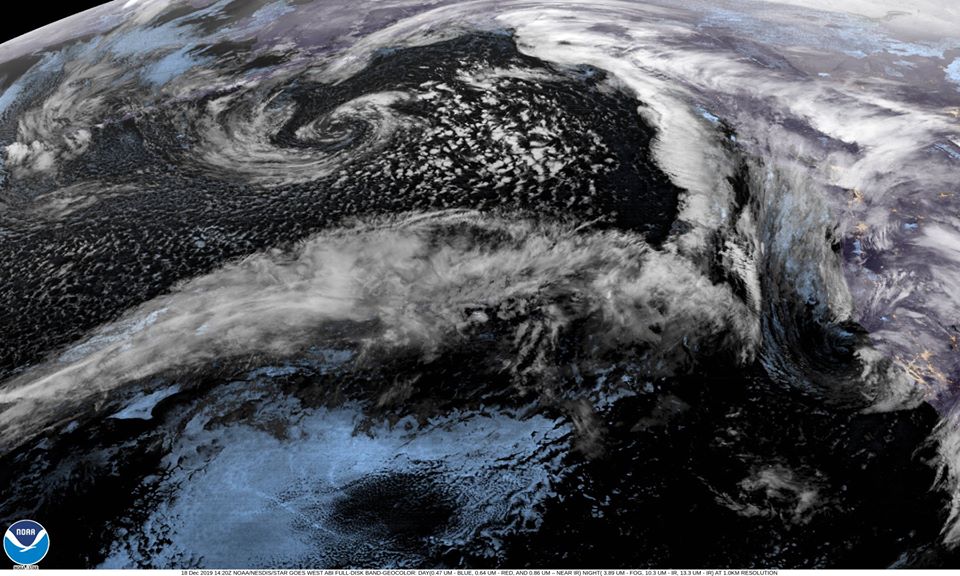 Provided by Gordon McCraw, GAM Weather Consulting to Pioneer readers as a public service
Your Pacific Northwest Weather Authority
Wednesday, December 18, 2019 – 11:30am
A confusing picture looking at the satellite picture with a lot going on. There is a low pressure area in the Gulf of Alaska contributing to the northwesterly flow of the Atmospheric River area racing towards the coast. Closer to the coast, we have a another low pressure area down off the coast of California that has pretty much stalled, a front off our coast but there is another front moving in from the northwest that will merge with the first one, then they move across, pushing in the rain later this afternoon, Wednesday December 18th. The rain rates will increase tonight along with the winds. It looks like we could see close to an inch of rain for this event, maybe a little higher in the Coast Range.

Tomorrow, December 19th, we deal with the Atmospheric River pushing in from the south, bringing moderate to heavy rain to the area. To start, a very wet warm front with some tropical moisture pushes into the area bring periods of heavy rain to the coast and Coast Range starting tomorrow afternoon. This is followed by the associated cold front that stalls and continues the heavy rain period. The latest model runs are beginning to focus more on northwesterly Oregon and SW Washington. The National Weather Service advises this event has the potential to bring between 5″ and 10” of rain to the coast and Coast Range from Thursday through Saturday with the greatest amounts near or in the Coast Range. During the heavy rain periods, urban and small stream flooding is possible as the rate of rainfall exceeds the ability of runoff or drainage. The area of heaviest rainfall is still somewhat uncertain though it has narrowed, the problem is this narrow band is dumping the rain in a 75-100 milewide patch. This makes it difficult to know exactly which watershed is at the greatest risk of flooding. As a result, the National Weather Service will likely issue a broad area Flood Watch in the near future. Currently the River Forecasts for the Tillamook County rivers do not show any flooding. As the new weather model inputs get run in the river models, this could change. We will have a couple more model runs before the event starts tomorrow. I continue to stress, this is the best time to get ready, make you plans on what you plan to do. You may have to execute your plans during the day tomorrow.
In addition to the heavy rain and flooding potential, we have a high wind potential, as usual, mainly at the beaches. The winds do increase tonight, December 18th, becoming southerly 10-15 gusting to 25. They ease up some tomorrow morning, December 19th, then increase again tomorrow afternoon, peaking tomorrow evening through Friday morning, December 20th becoming 20-25 gusting to 40 in town, 30-40 gusting to 60 along the beaches and headland. There is a High Wind Watch for this period (6 pm on Thursday December 19th through 8 am Friday, December 20th.)
And speaking of the beaches, the swells being generated from this event make sneaker waves more likely, and, there is always a threat of rip currents. All the usual cautions apply!
So, the rain begins to ease Saturday as the front drops to the south and east of the area and is replaced with scattered showers. The showers become more widely scattered Sunday then we may just see some high pressure move in for the start of next week, but don’t get to excided, the active weather likely returns after midweek.
​Gordon’s Weather Center – www.gamweather.com