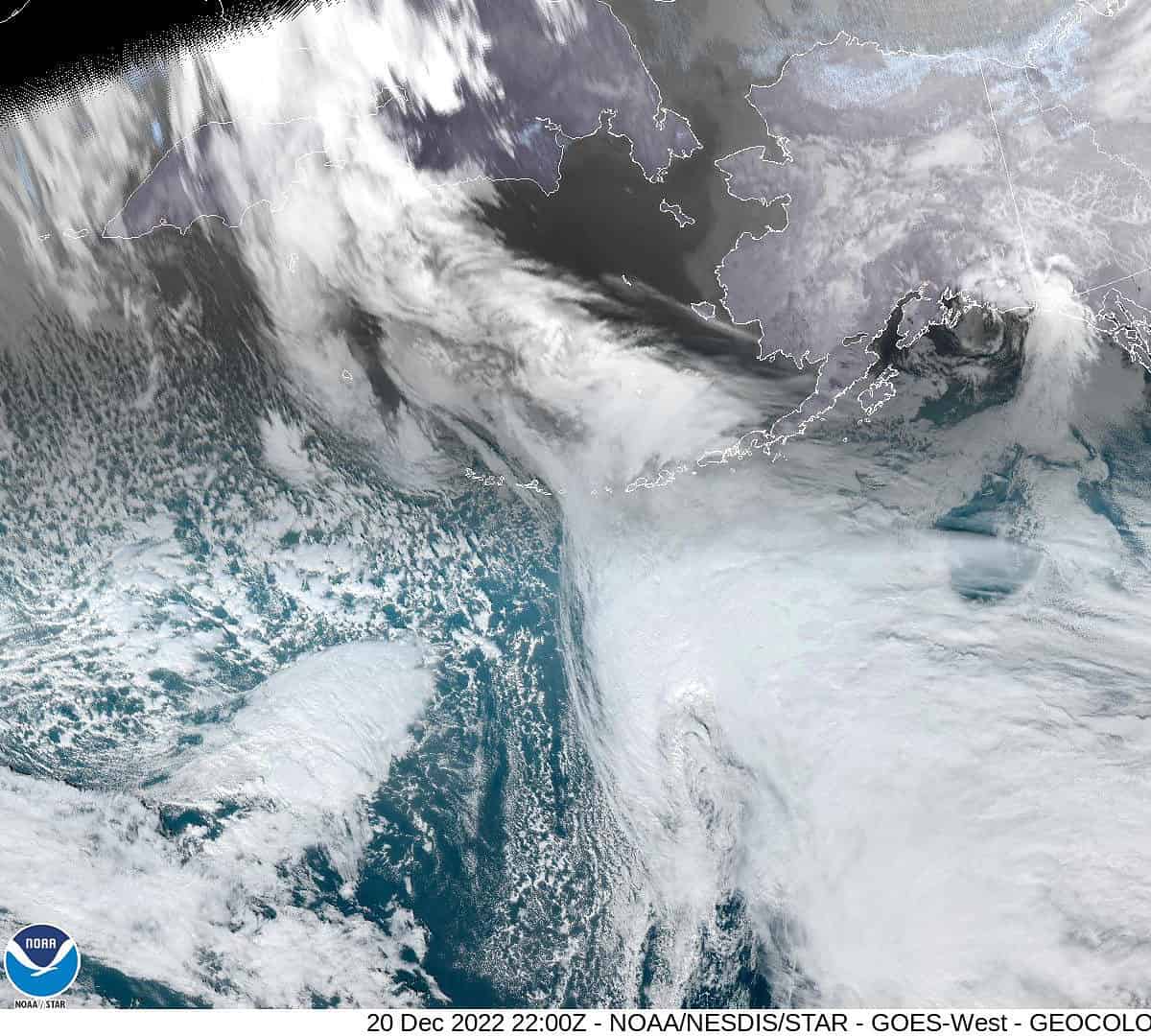 It was rainy and breezy today as a weak front dropped south thru the region. This evening we still have a slight chance of some light rain which diminishes before midnight as high pressure starts to build in from the northwest bringing us cooler, dryer air that gives us mostly cloudy skies tonight, and northwesterly winds 4-8 becoming calm by midnight, the low near 30. The snow level, which was around 2000’ before the front, drops down to around 200’ after midnight behind the front. This could result in some patchy ice on the roads. 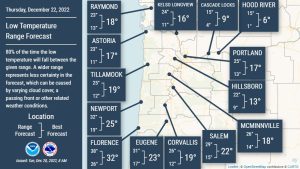 Tomorrow, we continue with the mostly cloudy skies, the winds becoming northerly 4-8 by the afternoon, the high near 41. Tomorrow night under mostly cloudy skies still, the winds shift, becoming easterly 14-18 gusting to near 30, pulling in the very cold Arctic air to the east, the low drops to near 20 which puts the windchill down into the single digits. Tomorrow night – Wednesday 12/21/22 – is when you need to think about the 3 P’s: pets, plants, and pipes. Hypothermia and frostbite are also a concern for individuals outside.

A Pacific front will push in some precipitation Thursday which gives us a chance of snow to start as the temperatures will still be below freezing during the day, but in the afternoon the front will also push in some warmer air aloft. This will cause the falling snow to melt before it hits the ground. As the surface temperatures are still below freezing, there is a chance of freezing rain later Thursday afternoon and evening. It will continue to be breezy as well with east winds 10-15 gusting to 25, the high in the afternoon only around 33 with the windchill in the teens.

The surface temperature drops again Thursday night, but we will still have the warmer temperatures aloft with the snow level actually up around 2200’. With a higher chance of rain tomorrow night, freezing rain is likely making all surfaces very slick. The overnight low drops to near 23 and with the breezy southeasterly winds, the windchill remains in the low teens.

The models agree that Friday things start to warm up, still cloudy and rainy but warming with the afternoon high up near 47, still rainy Friday night but the low only dips to around 39. Be aware though that the passes temperatures will still be low enough that the freezing rain and icy roads are a major concern, even during the day.

Christmas Eve and Christmas Day is still cloudy and rainy but with highs climbing into the mid 50s and nighttime lows only down to the mid 40s. At this level, the passes are thawing out as well!

This is shaping up to be a significant event for the Pacific Northwest with snow but mainly freezing rain likely across the entire area including the coast. We can expect a tenth of an inch accumulation on the coast with upwards of ½” in the Coast Range Thursday into Friday. This will have significant travel impacts during that period across the entire area making roads treacherous Thursday and Friday. I was in a major ice storm when I was going to Meteorological School in Illinois (a long time ago). This caused many limbs to break onto the roads with some impacting power lines causing power outages. This same event also had strong winds which added to the problems. All these things are possible with this storm event in Northwest Oregon this week.

Please be careful, and minimize travel on Thursday and Friday. You don’t want to get stuck out on the roads with the temperatures and windchills as cold as they will be. No time is a good time to be in an accident but especially right before a major holiday. Make your plans now so you are prepared no matter what happens.