Well, say goodbye to the usual coastal weather for the next few days as the forecasted very strong and hot ridge of high pressure is building to the northwest and will move over our area thru the weekend and into the start of next week.

This morning the marine layer has pushed in causing cloudy conditions with patchy fog and mist. This will burn off sooner than the past few days leaving mostly sunny skies later this morning. The onshore flow will also weaken the next few days which means the marine influence will also weaken. This translates to a warmer day today with highs in the mid 70s here, around 90 in the Coast Range, and the mid 90s thru much of the valley.

Tomorrow, Saturday, the record breaking heat wave starts to really kick in with temperature here around 80, the upper 90s in the Coast Range, and at or near 105 thru the valley.  The winds here will be relatively light in the afternoon, otherwise calm. The overnight temperatures here in the low 60s, but over in the valley, the lows stay in the 70s.

Sunday looks to be the hottest day, a scorcher! Temperatures at the beaches will be in the 80s, at or near 90 inland, and in the valley, it is being described as unprecedented, and we could include the Coast Range.  Highs in the Coast Range could get up to around 108 while the valley could hit or top 110 degrees. Lows Sunday will be around 63 here, 69 in the Coast Range and around 73 in the valley which is pretty close to what the average high usually is this time of year there.

Monday the marine air starts to filter back in over our area as an upper level low pressure area move northward along the coast that will weaken the high some and push it towards the east a little.  For us this means our highs will be in the mid 70s Monday but across the Coast Range into the valley, they are still looking at the 100s or better with the hottest temperatures of around 110 into the Gorge and Hood River area.

By Tuesday temperatures here will be back down to the low 70s, still with mostly sunny skies, the Coast Range down into the mid 80s and the valley, mainly in the low to mid 90s though the Gorge and Hood River areas could still be at or near 100.

Wednesday and Thursday here will be about the same with highs in the low 70s, the Coast Range in the mid 80s still and the valley should be moderating, the upper 80s to low 90s though there could be some areas still in the mid 90s.

Again, we will likely see many records fall over in the valley this weekend.  We could see record highs over several days.  This could set another record on the longest stretch of days over 100, and there could be some all-time records set.  Another record could be the highest low nighttime temperatures.

The impacts from this weather can be many, we have already seen some drownings resulting from the Rip Currents.  Another issue is the rivers are exceptionally low from the lack of rain the past few months.  Be extra careful diving into these. If you are working or recreating outside, watch for Heat Stress and Stroke, dress appropriately, drink plenty of water, wear sunscreen, and take lots of breaks.  Finally, DO NOT leave young children or pets in vehicles as the temperatures can and do rise to dangerous levels quickly.  Every year 38 kids die that were left unattended in vehicles, 88% of those were 3 years old and under.  With the high heat and the dryness from the lack of rain, fire concerns are also high. 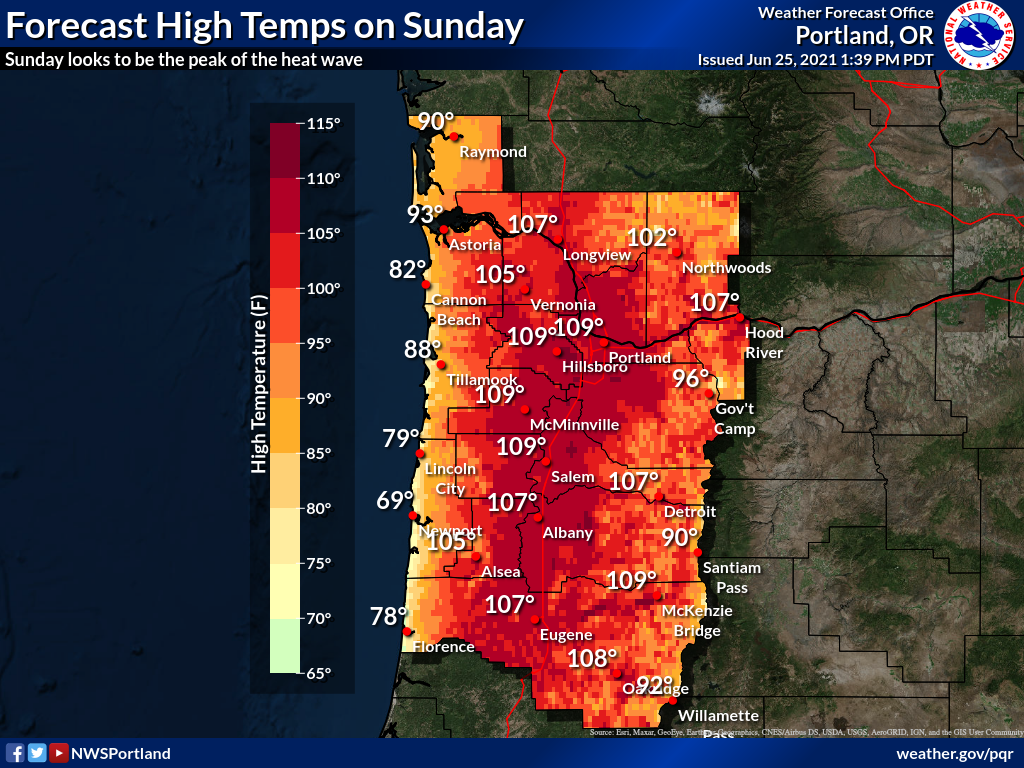 How hot will it get this weekend? Well, Sunday is shaping up to be the hottest day with high temps soaring to an astonishing 105-110 degrees for the interior lowlands. This means several locations could see the hottest temps EVER observed since records began (which was in the late 19th century for downtown Portland). Widespread highs at or above 100 degrees are likely on Saturday and Monday as well. STAY COOL!

And yes, that is a forecast high of 96 degrees at Government Camp. Even the Cascades will feel hot.