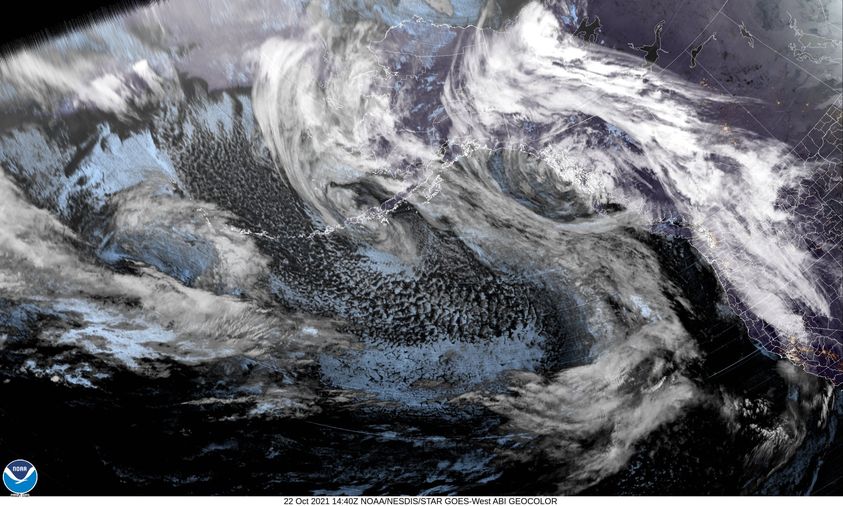 EDITOR’S NOTE: We are weather-watchers around here. We were raised that way because coastal weather can change in an instant and it impacts most everyone’s livelihoods – from the farmers to the fishers to the businesses and visitors. A favorite saying, especially during this time of year and time’s of often unsettled weather, if you don’t like the weather right now, just wait a minute 😉 As you can see from the satellite image, there are multiple fronts lined up and much uncertainty about exact impacts, etc. We do have high wind watch, high surf warning and flood watch in effect starting Sunday October 24th.

By Gordon McCraw, Tillamook County Emergency Manager
TGIF Weather: Yesterday’s front has pushed off to the east but now we see a secondary line of rainshowers pushing across the area towards the east also. There is another system will drag another front through tonight into Saturday morning bring more rain and gusty winds. After that we watch the system expected Sunday into Monday that many are talking about. The models are still in a bit of a flux but getting better. The differences now are just how strong and exactly where it will go ashore. Some aim it towards Washington, other take it further north to Vancouver Island. It is looking like the beaches will be seeing winds 50-60 and inland around 45. The seas will be dangerous with wave heights up to 35-45′ Sunday night into Monday. This will also generate some dangerous sneaker waves at the beach and with the tidal anomalies, some coastal flooding is also possible by Monday. There could even be a thunderstorm sneaking into the mix.
So, back to today’s weather, cloudy with more showers this morning, becoming widely scattered this afternoon, winds southeasterly 4-8 this morning the becoming westerly this afternoon, the high near 59. Widely scattered showers tonight followed by more rain around midnight, southerly winds 5-10, lows near 48.

Urgency: Future – Responsive action SHOULD be taken in the near future

Urgency: Expected – Responsive action SHOULD be taken soon (within next hour)

* IMPACTS…Major flooding, up to one foot above ground level, during high tides is expected along the immediate coast as well as low lying areas near bays, sloughs, and the lower reaches of the coastal rivers.

* ADDITIONAL DETAILS…Large waves and dangerous surf conditions with breakers up to 35 ft are also possible.

A Coastal Flood Warning means that flooding is occurring or imminent. Coastal residents in the warned area should be alert for rising water, and take appropriate action to protect life and property. If you are driving and become trapped in flood water, abandon the car and move to higher ground only if the surrounding water is not moving. If the water is moving, do not leave the car. Exercise extreme caution along beaches. Unpredictable and destructive waves may wash over beaches, jetties and other structures with no warning. Beach erosion is possible. In southwest Washington similar conditions in the past have resulted in significant flooding in Raymond, erosion to homes and roads near Washaway Beach along Highway 105 near North Cove, and/or erosion to campsites near Cape Disappointment. In northwest Oregon similar conditions in the past have resulted in severe erosion near the south jetty of the Columbia River in Clatsop county, and/or flooding in Seaside, Cannon Beach, Neskowin, and/or the Pacific City Airport. On the central Oregon coast similar conditions in the past have resulted in severe erosion in Neskowin and/or Yachats, and flooding in Lincoln City.