Effective March 12 through March 25, there will be two counties in the Extreme Risk level, nine at High Risk, 12 at Moderate Risk, and 13 at Lower Risk.

Here is the complete list of counties and their associated risk levels is available:

“We are largely seeing case rates decline across the state, with the most counties in the Lower Risk level since the framework was introduced in November,” said Governor Brown. “This should serve as a reminder that when we follow the health and safety measures we know work against this virus, we can truly make a difference in infection spread. But, we still have more work to do before we reach the level of community-wide protection we need in order to return to a sense of normalcy. I encourage all Oregonians to keep it up and to get your vaccine when it’s available to you.”

A modification has been made to the two-week caution period process announced last week, which had only addressed counties moving back to Extreme Risk. Beginning this week and continuing until further notice, counties that reduced their COVID-19 spread enough to move down in risk level in the previous two-week period, but see their numbers go back up in the next two-week period, will be given a two-week caution period to bring COVID-19 case rates back down again.

This week, the caution period applies to two counties:

The caution period will allow counties to re-focus efforts to drive back down creeping case numbers, and give local businesses additional certainty on their plans for operating. If, at the end of the caution period, case rate data still puts the county at a higher risk level, the county will move to that level.
The Oregon Health Authority will examine and publish county data weekly. County risk levels will be reassigned every two weeks. The first week’s data will provide a “warning week” to prepare counties for potential risk level changes. The next assignment of risk levels will be announced March 23 and take effect March 26.

Updates to Warning Week data and county risk levels will be posted to coronavirus.oregon.gov.

Here is the Risk Levels Guidance: 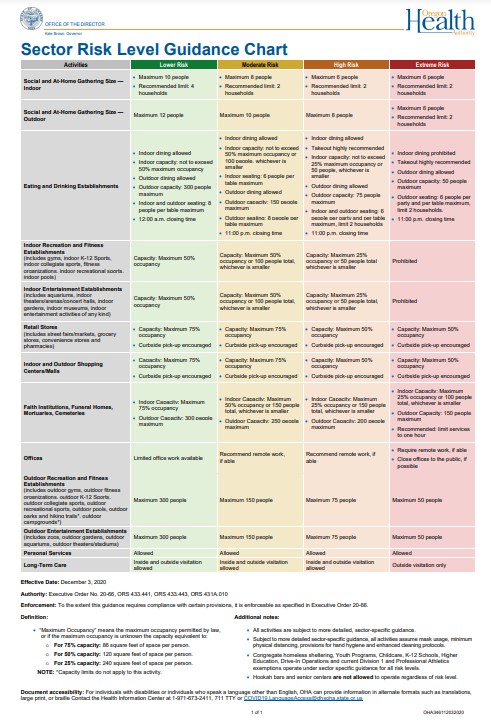