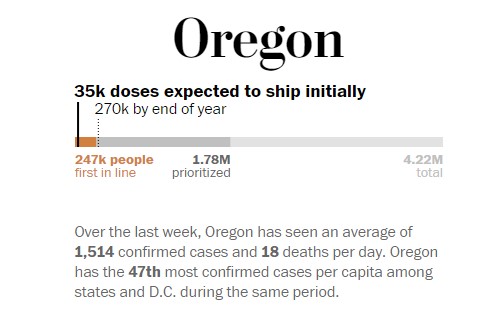 (Salem, OR) — Governor Kate Brown issued the following statement December 11th regarding the FDA’s emergency use authorization of Pfizer’s COVID-19 vaccine:
“In less than ten months since the first case of COVID-19 was identified in Oregon, the day is soon approaching when this vaccine and others will help us begin to return to normal life. For months, Oregonians have made tremendous sacrifices to protect each other and save lives. We have lost too many friends and loved ones to this disease. We are in the middle of some of the hardest days of this pandemic.
“We have come so far together. Now is the time for all of us to dig just a little deeper, hold on just a little longer. Keep wearing a mask. Avoid gatherings. Change your holiday plans this year, so that next year we can all celebrate together again. The faster we can drive down the spread of COVID-19 in our communities, the sooner we can reopen our schools, our businesses, and begin to lift the restrictions that have kept us healthy and safe this year.”

The vaccine will next be reviewed by the Centers for Disease Control and Prevention, Advisory Committee of Immunization Practices (ACIP). The committee will review all available data about the vaccine and is expected to vote on Saturday, December 12.

The Western States’ Scientific Safety Review Committee will be meeting over the weekend to review the data findings for the Pfizer vaccine. Vaccine distribution is expected to begin in Oregon next week.

Oregon is expected to get about 35,000 doses in the first set of Pfizer vaccines. If the Moderna vaccine is approved, the state could get a total of 270,000 doses before the end of the year. That is enough to vaccinate 6.3 percent of the state population.

The state has approximately 200,000 health-care workers and 48,000 nursing home residents and workers, and the number of doses expected in December is enough to give them a single dose by the end of the year. The vaccine requires a follow-up booster about three or four weeks after the first shot.

Distribution of the Pfizer- BioNTech vaccine to more than 600 locations in all 50 states is set to begin. Gen. Gustave Perna, chief operating officer of Operation Warp Speed, said on Saturday that vaccine doses will begin moving from Pfizer’s manufacturing facility on Sunday and arrive at 145 facilities on Monday. These locations are primarily large health-care systems able to handle the vaccines and their storage at ultracold temperatures. Nearly 500 additional facilities will receive doses on Tuesday and Wednesday.

If the Moderna vaccine is approved in December, supply to the states will increase greatly.

Operation Warp Speed, the Trump administration’s initiative to speed development of vaccines and therapeutics, has repeatedly declined to disclose the number of doses the federal government is sending to each state or jurisdiction. The Post is tracking how many doses are expected to be delivered in the first set of Pfizer’s newly authorized vaccine and by end of the year.

According to the official CDC guidance to the states, the first to receive the vaccine are health-care personnel — because of their exposure to the virus and their critical role of keeping the hospitals functioning — and residents and staff of nursing homes, as they account for nearly 40 percent of deaths from covid-19.