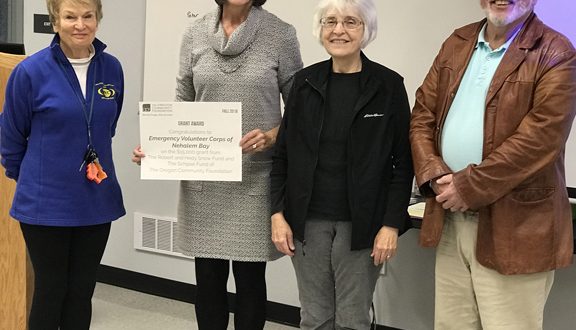 The Oregon Community Foundation has awarded a $15,000 grant to the Emergency Volunteer Corps of Nehalem Bay to help develop an emergency food supply plan that would come to the aid of residents and visitors in north Tillamook County following a major disaster. The grant was presented Nov. 26 at the Corps’ board meeting in Nehalem.
The worst-case local disaster – a Cascadia Subduction Zone 9-Point-Plus earthquake, followed by a devastating tsunami – could be expected to destroy roads, bridges and utilities, blockhighways, and isolate the area from outside help for weeks.

To provide for survivors, the plan envisions local governments having stored food supplies in advance sufficient to last for at least 21 days, until emergency supplies could be brought in — by air, sea or reconstructed highways. The plan will also include guidance for local households capable of doing so to store their own water, food and other supplies, for use while they shelter in their homes.
Everybody else – residents whose homes were destroyed, tourists, and those passing by when the disaster struck – would be expected to gather in shelters or temporary encampments throughout the area. Low-income residents unable to stockpile their own food will also need help. Having a mass-feeding plan thought out, with provisions stored in appropriate places, will be critical to survival and recovery.
Emergency Volunteer Corps planners have estimated the area could have as many as 6,000 people left behind by a major disaster and needing help with water, food, and hygiene and sanitation requirements
According to a 2017 strategic plan, the only highway routes the Oregon Department of Transportation (ODOT) could hope to eventually get open to the north Oregon coast following a major disaster – after dealing with landslides and bridge failures — would be Highway 30 to Astoria, and Highway 18 to Lincoln City. The area between those highways, Tillamook and Clatsop Counties, would be unable to be resupplied by road for weeks or months.
The $15,000 OCF grant will be used to find and hire an emergency food consultant who will prepare plans for mass care feeding and individual household food preparedness. Included will be recommendations for the types of food to acquire, nutritional considerations, food storage, stock rotation, distribution and preparation, waste disposal, and food safety. Informational brochures will be printed in English and Spanish.
EVCNB’s Mass Care budget, which is funded by donations and fundraising, will pay for copies of the plan to be distributed to all interested parties, including cities, special districts, county, and state emergency management offices.


According to its website, the EVCNB is “dedicated to building community and regional resilience, developing programs to ensure readiness, and creating a culture of emergency preparedness.” The organization focuses its work in the Nehalem Bay region, with outreach and support to all of Tillamook County.
In recent years, the 10-year-old organization has become a research and development organization, studying problems involved with emergency preparedness and finding solutions that would work in a rural, coastal area such as north Tillamook County. Their findings and recommendations are then turned over to local city and other government agencies, which would be responsible for responding to a local disaster.
“Informational materials for households will focus on simplicity and practicality. A huge amount of information about emergency food is available, perhaps too much, making preparation seem like an insurmountable task,” said Peter Nunn, Vice President, Mass Care for the EVCNB, who co-authored the grant application. “Training materials will provide step-by-step advice on what foods to purchase, how to store them, and how to prepare them. Having more local households prepared to take care of themselves means increased local resilience, and fewer needing government support.”
Current plans call for the household advice brochure to be completed by May 2019. The recommendations for local governments are expected to be drafted by July, reviewed by stakeholders by October, and released in November 2019
“The beneficiaries of this project are not limited to the Nehalem Bay area. Many other communities in Oregon are at similar risk from a Cascadia event or other natural or man-made disaster,” said Margaret Steele, MD, who co-authored the grant application, and leads the EVCNB Medical Reserve Corps division. “The technical advice and educational material developed by this project will be shared throughout Tillamook County, the State of Oregon and indeed the Pacific Northwest.”
“We are very grateful to the Oregon Community Foundation, The Robert and Hedy Snow Fund, and The Schpee Fund for supporting our community with this important grant,” said Linda Kozlowski, EVCNB President. “They are truly fulfilling their mission to strengthen communities by funding innovation.”
Kozlowski said the grant application included letters of support from the Emergency Preparedness Forum and the Tillamook County Citizen Corps Council, the Oregon Food Bank, CARE, Tillamook County Emergency Management, the cities of Manzanita, Nehalem and Wheeler, the Tillamook County Commissioners, Nehalem Bay Wastewater Agency, two local water districts, Nehalem Bay Fire and Rescue, and the Oregon State Resilience Officer.
“These organizations will be asked to provide input for the plan, and review drafts of the materials as they are developed,” said Kozlowski. “They understand the communities’ needs.”
“Although no emergency food has yet been purchased, the three cities in the Nehalem Bay area have agreed that it is their responsibility to support the Mass Care Food Plan,” added Kozlowski. “Implementation will be paid for over time with public funds. The cities need technical advice, which is EVCNB’s mission to provide.”
For more information about EVCNB’s programs, go to www.evcnb.org