By Laura Swanson
Photos & Video by Don Backman
There’s a social media page called “Highway 6 Road Reports (aka Danger Mountain) AND concerns” that was established in 2019 as we began to experience more congestion and traffic heading to and from the place we call home. After this last week and multiple accidents that resulted in deaths, there is again a call to do “something.” And the list is long – more signs, more patrols, establish a “safety corridor”, signs and pull-offs for slow moving vehicles, and of course, social media shaming by posting photos of the offenders. This is not a new concern or conversation, but there is more momentum and grassroots community organizing motivated by this post by Jesse Borough – BEFORE the Saturday crash that claimed more lives. Consensus from the hundreds of comments – “something” definitely needs to be done.

From Jesse Borough:
I just spent the past hour on the phone with Sheriff Brown. Eight p.m. on a Friday night answering my questions and discussing strategy for a safer stretch of road for highway 6.
I believe many of us have this same goal in mind. The obvious is people not making smart decisions on this stretch of road. There is nothing we the people can do to curb this. However there are ways of making a difference as a community and this is what I have been discussing with Sheriff Brown about these past couple months.
This post is for some positive feed back. The community to band together, to solution seek, to put our heads together and help make this forty mile stretch safer. 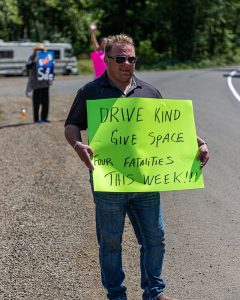 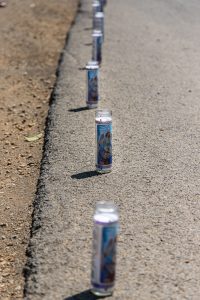 Today, Sunday August 1st, Jesse was joined by a few others as they stood at the entrance to the canyon off Highway 6 with signs about the recent tragedies, lit candles for those lost, and messages to slow down and drive kind. “It’s a start,” said Borough. “And we’ll work on other ways to bring attention to what needs to done here.”

“It just takes one person slowing down, one person to see these signs today that can make a difference,” said Jesse Borough. “This isn’t going away or being solved overnight, we’re in it for the long haul to make this a safer highway.”

Highway 6 is the jurisdiction of OSP (Oregon State Police). And like everything funding is the problem. I will be contacting this office and asking these same questions and letting them know we as a community are banning together to help them help us.
It’s a state highway – ODOT (Oregon Dept. of Transportation) also on the contact list.

Aaron Palter suggested this: For those concerned about the growing issues regarding Highway 6, here is a link to ODOT’s “Ask ODOT” interface. I would imagine if ODOT received a massive amount of commentary, something might find itself up the chain of command. I’ve just provided my input.
State of Oregon: Ask ODOTHIGHWAY.ODOT.STATE.OR.US

Jesse Borough takes on community issues and has that git’r done, boots-on-the-ground mentality. “I know this is a wide ranging issue and there’s lots of emotion about this right now. Let’s open it for discussion. I am taking this serious and would like serious inquiries only. Let’s form a community task force and take this to the state level for funding — for road improvements and signage, whatever it takes so we don’t have another week like this,” said Borough. “Many of us that travel this stretch of road know why things happen the way they do — drivers drive way to slow, won’t pull over, speed up at the passing lanes. This makes for road rage for the ones behind said driver, and the list goes on and on.
We are here to bring solutions to this problem. We need more patrols on this highway, more signs for slow vehicles to pull off.”
It takes a concentrated effort from as many people as possible, according to Borough, Sheriff Brown suggested three things:
1. Mass Public support
2. Testimonials
3. Letters

Here are Jesse’s suggestions, “Let’s collaborate on a community letter of why we as a community need funding for Highway 6, and then get signatures on this letter. Watch for an outline of the letter soon, and we’ll include ways to ‘sign-on’. If I could get a couple people to join me to be the spokes people for our community, we would speak on behalf of our town for this project. These few people would be in charge of getting these letters out to the public for people to sign.
• Personal letters to our county commissioners, state representatives, senators, Travel Oregon, ODOT, OSP. This too can be done. If you would like to start writing letters to the powers that be. Respectfully write your letter and make sure that Highway 6 is the subject. You can find their email info at co.tillamook.or.us.
• Personal testimonials: If you have a personal testimony and would like to share – reach out to the Pioneer and we will include the stories about “Danger Mtn.”
• Mass Public support- This community of ours sticks together, we always have. We are unique in this fashion. I am working with many different communities across our state, I network with many people with the fire relief efforts. There are good people out there, so many people just want to help, they just don’t know how or WHO will listen. We can all unite and do our part as a community, do our part as ONE person to make this stretch of road safer.”
Awareness about safe driving and traffic – this isn’t the same Wilson River Highway we’ve all been travelling for (ahem) 50+ years … and it’s not highway that drivers from out-of-state might be used to, especially at night or early morning. Outreach education and building awareness about this stretch of highway — part of a designated “scenic byway” – “Trees to Seas” is one of the most scenic drives connecting the valley to the coast. But lately it’s been one of the most dangerous.
If you are interested in helping with the efforts to improve safety on Hwy. 6, volunteers/spokespersons- reach out to Jesse Borough via Facebook Messenger, or to the Tillamook County Pioneer – editor@tillamookcountypioneer.net. Many hands make quick work, and there are many tasks to assist with for a successful outcome to make our local roads safer for everyone.
Community- send your letters to our three county commissioners, to the Pioneer, to our state senators, to ODOT.
Watch for the community letter to sign and share. Let us know your ideas and solutions.
“Teamwork makes the dream work,” said Borough. “I’m in this for the long haul to truly impact and see changes made on Danger Mtn. so local residents don’t have to fear driving over the hill. Thanks everyone.”