On the crest of a small hill in the Big Creek Unit near Valley Creek Lane in Knappa, Oregon, an even age timber harvest (clearcut) is in its fourth year of regrowth. A casual observation of the plot reveals clumps of Red Alder, Himalayan Blackberry, and other brush growing up amongst a distant Bigleaf Maple and a Vine Maple.
Above the hum of cars on nearby Highway 30 the songs of White-Crowned Sparrow, Swainson’s Thrush, Black-Headed Grosbeak, Pacific-slope Flycatcher, and Common Yellowthroat can be distinguished. A Wilson’s Warbler flashes yellow across the clearing, flying into the brush, while Violet-Green Swallows swoop and soar.

And on the ground, below the sounds of man and nature and the green and brown of the trees and landscape grow small patches of wildflowers. But on this plot of land, owned by Hampton Lumber Mills, these flowers did not spring up on their own. The flowers growing on this plot are part of a Hampton-driven research project centered on pollinator habitat improvement using wildflower plantings in clearcuts.
Hampton Lumber is a partner with OSU, the Oregon Department of Forestry and the Oregon Department of Fish and Wildlife in forest pollinator research. This collaborative group conducts studies on how native pollinators, including bees and butterflies, use young seral (seral meaning a stage of forest growth) habitat.

The Hampton-driven pollinator habitat enhancement project is in its second year. A leader of the project is Jed Arnold- a continuing student at Oregon State who works for Hampton.
Arnold says that three days after being hired he was asked to explore how Hampton could use young timber stands as native pollinator habitat, and how to enhance that habitat. “They (Hampton Management) told me that we are creating this habitat anyway, and if there is a way that we can improve upon that, then let’s figure out how to do that.” He relayed that an owner had recently gone to a presentation on pollinator habitat and realized that his company could help out with this problem if native pollinators were facing a threat, and that if there was a way they could make habitat better, or find ways to do things a little different, that was something he wanted Hampton to explore.

Arnold, who has previously worked for the East Multnomah Conservation District in ecological interactions and water quality, had some experience with pollinator habitat management when he worked on incubator farm pollinator hedgerows. But before he began his research three years ago, Arnold called Jim Rivers, an Assistant Professor of Wildlife Ecology at OSU. Rivers told him that pollinator habitat improvement in forestry is such a young field of study that Arnold’s work would be at the forefront of research in that area.
When reached for comment, Rivers gave context on the work being conducted. “…we know very little about insect pollinators in managed temperate conifer forest in general, including which species are present, how they use floral resources typical of open forest areas, and how they are influenced by contemporary management practices.”
Rivers supported his statement by pointing to a review article he and Sara Galbraith, James Cane, Cheryl Schultz, Michael Ulyshen, and Urs Kormann wrote for the peer-reviewed publication Society of American Foresters in 2018. In it, Rivers and the other researchers reviewed both literature and hosted a workshop for Pacific Northwest Biologists and land managers. Through their work, they developed a research agenda for pollinators in managed conifer forests consisting of three themes- all three of which Hampton and Arnold’s work are addressing, including assessing the influences of forest-management activities on pollinators. Furthermore, their work pointed out research which showed that, “clearcut harvest creates conditions favorable to many pollinators.” 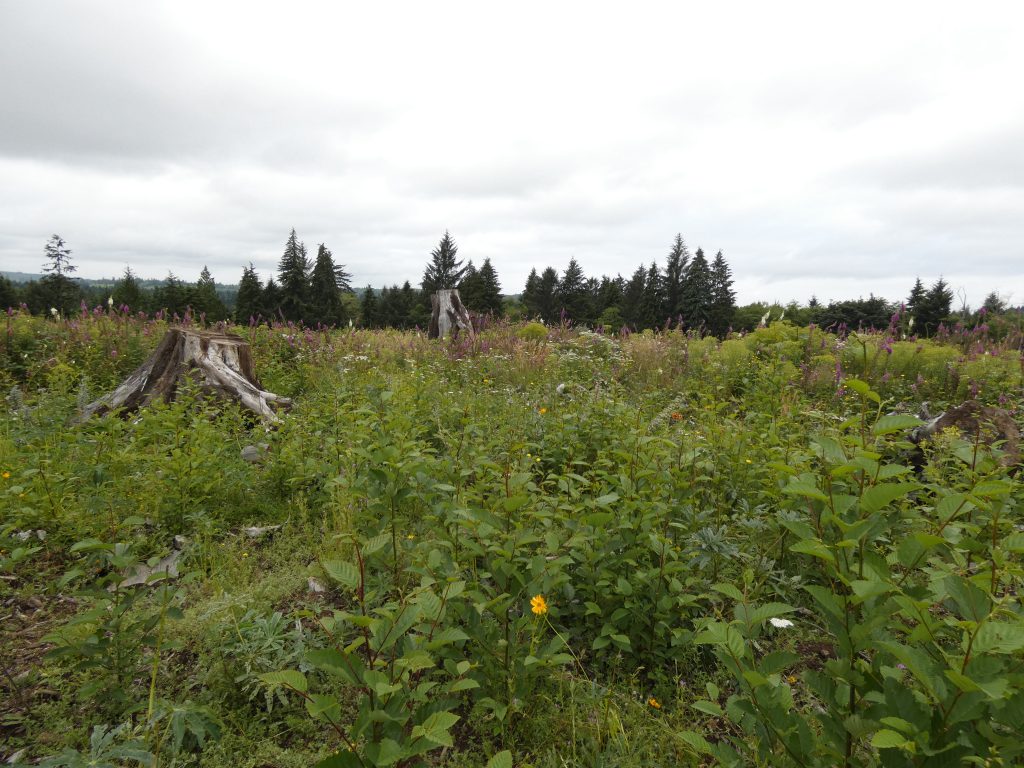 Looking over such a clearcut harvest near Valley Creek Lane, Arnold summarized his ongoing progress in Hampton’s own project to improve pollinator habitat. “After my first year there were many unsuccessful forest seedings where broadcast seeding (spreading seeds without preparing the ground) was tried. (These were) agricultural and meadow restoration principles and (I) applied it to forests, and it doesn’t work.” During Arnold’s preliminary attempts he observed that especially on the north coast (Clatsop and Tillamook Counties), following even-age harvests on a timber unit there was a really thick duff (layer of vegetation on the forest floor) which inhibited native seeds from coming up on their own.

But Arnold understood the trial and error nature of being on the forefront of research. Walking across the Valley Creek Lane plot he pointed out Yarrow, Farewell to Spring, Clarkia, Indian Blanket Flower, Oregon Sunshine (which, interestingly, didn’t come up after the first year it was sewn), and Lupine- all of which were sewn two years ago.

While this plot showed some success, Arnold relayed the point that the duff inhibits a lot of growth, and in his observations realized that there was an inherent opportunity to bypass this problem in recently harvested plots- slash piles. 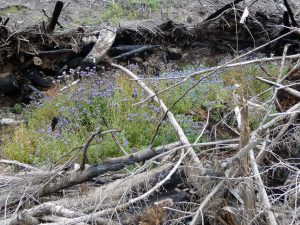 At a second location, also on the Big Creek Unit, Arnold pointed out the opportunities that slash piles afforded pollinator habitat improvement. “The slash burns away duff and kills competing seeds,” he said. While the pile of burned debris looked uninviting, cradled inside its nest-like bowl a bed of wildflowers was thriving. Baby Blue Eyes, Blue Head Gilia, Farewell-to-Spring, Fragrant Popcornflower, Lupine, Selfheal, and Grand Collomia were blooming- and had attracted dozens of buzzing native bees. The pollinator habitat improvement attempt in this plot, whose timber was harvested the previous fall and wildflowers planted in the early spring, showed success. 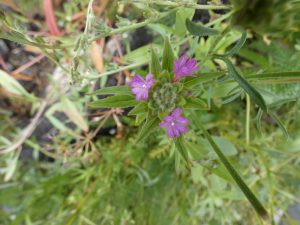 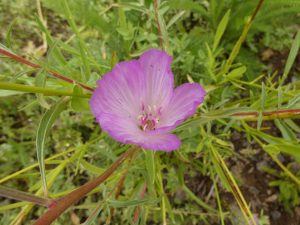 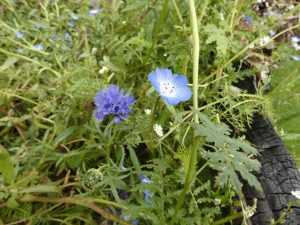 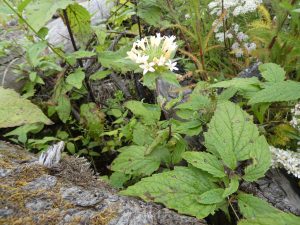 “After a cut, burning is done in the dead of winter (January). Some seed species need a week of freezing temperatures to germinate. This is possible on the north coast, where we often get that freezing week in the early spring. The rain puts the seed under the soil and the flowers grow…If you want to do broadcast seeding your sweet spot really is immediately after harvest.”

Arnold also pointed out another benefit of using slash piles. There are different species of native bees that nest in the wood exposed soil on the edge of a slash pile. He observed that the size of some of the bumblebees in the immediate area indicated that bumblebees were likely nesting nearby.
Arnold postulated that a strategy for creating more wildflower pollinator sites in a recently harvested stand might be linked to creating more slash piles instead of a few large ones- which would disperse the amount of flowers available over a given area. However, more slash piles also means more opportunities for a wildfire. “There is always a tradeoff,” he said.
Arnold reiterated that there is no financial incentive for improving pollinator habitat for Hampton; their work is exclusively to provide refuge for native pollinators. “Our goal is to come up with a set of practices and management techniques that we can put out there for use for other landowners,” he said.

Hampton owns around 80 thousand acres of managed timberland in Oregon. While that may seem like a lot, in relation to other timber management companies it is quite modest; for example Greenwood Resources, which manages Lewis and Clark Timberlands, has 139 thousand acres in Clatsop County alone. Sharing practices and techniques with larger and smaller woodland owners would allow pollinator habitat to be improved across the state. Arnold stated that while the same techniques could be used by any owner, seed composition would need to be changed based on the location.
Though the project is based around improving pollinator habitat, and not native reseedings, Arnold pointed out that he collaborated with OSU on wildflower species to be used, and that there were many barriers for getting a perfect mix of native wildflowers specific to the north coast. “With the flower species I’ve selected, my goal is to try and have about two of them flowering at any given time over the entire length of the growing season from very early spring to very late summer.” Arnold explained that some of the native bee species are quite small, literally the size of a pinhead, so offering different flowers allows many pollinators access to food.

This sentiment is echoed by Dr. Jim Rivers at OSU. When discussing wildflower composition, Rivers explained that bees, which are the most important pollinator in our region, can interact with many types of flowers. But he also explained that the seedbanks in our regions are grown in the Willamette Valley, and those wildflower seeds may not grow as well on the north coast. 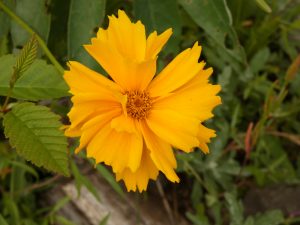 Arnold pointed out that some of the flowers used by Hampton were from Oregon Wholesale Seed. When reached for comment on the ability to supply native seeds for a highly specific site, Oregon Wholesale Seed pointed out problems they would run into when developing a seedbank. Initially, “getting enough seed is normally a big hurdle for collectors and agencies when they ask us to grow something.” They also pointed out that if enough seed was gathered to plant a field, there would need to be enough buyers for that specific seed. Another problem they run into is the shelf-life for native seeds, which is generally short, as well as how difficult it may be to grow certain seeds commercially.

While there are inevitably trade-offs when looking at finding an ideal seed composition for a specific site, the strategies that Arnold is working on seem to point towards a set of management practices that are financially low-cost for woodland owners, but high-benefit for pollinators, though he levied that the techniques he was developing would need to be verified in other areas of the state as well.

Still, the slash-pile planting technique shows promise, as he pointed out in a harvest where pollinator habitat methods were implemented two years previously. Here, whether they were scattered by wind or animals, seeds were beginning to redistribute outside of the slash piles. This redistribution outside of slash piles not only expands pollinator habitat, but also creates opportunities for wider regrowth in future harvests. Arnold explained that most plant seeds can stay viable in the soil for decades, meaning that after future harvests, wildflowers could spring up on their own. And with research showing that pollinators can move moderate distances to food sources, a sustainable model of wildflower growth in clearcuts could create viable habitat without need for replanting wildflowers year after year.
Arnold’s research is setting precedent for important pollinator habitat improvement statewide. Some timber companies have already contacted Arnold about his work, and the research he is conducting is shared with other state organizations who are looking into improving pollinator habitat. And while it is in its early stages, there is hope that some simple strategies and small flowers among Oregon’s towering forests will grow into a large future for our native pollinators.

If you are a landowner and are interested in improving native pollinator habitat here is a resource: