With a cry from the crowd, the ball went into play and the mighty Coast Guard charge wallowed into the fire department’s line of defenders. Players on both sides bounced off each other’s bubbles and went rolling on the ground. The crowd laughed and cheered. The Bubble Ball game was on! Encased in giant plastic bubbles, the players tried to kick a soccer ball into each other’s goal, the bubbles bouncing off each other making it very difficult for anyone to reach the ball, much less kick it or score a point. 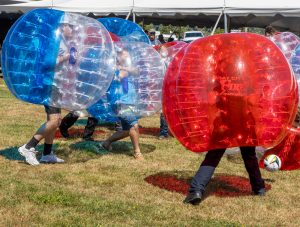 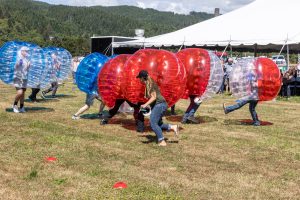 On August 4, 2022, the City of Garibaldi held its first ever Coast Guard appreciation day. 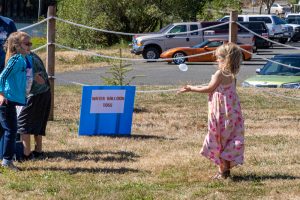 Event Coordinator, Laura Schmidt, owner of Oregon Coast Event Company, took time to answer questions just before the start of officiating the Bubble Ball game. “The city chose the date because it was the 232nd anniversary of the founding of the Coast Guard.”

of the City Council explained. “We started with tickets for Garibaldi residents and the Coast Guard, past and present, and their families. We wanted to make it a family event.” Coastguardsmen, the official term for Coast Guard personnel, arrived — many with young families. Planning started back in February. “We wanted to do something and to get the public 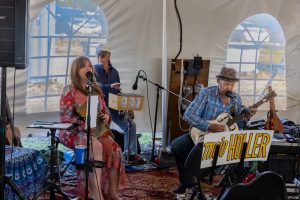 involved, and talked about Garibaldi becoming a Coast Guard City.”

There are 29 Coast Guard cities in the United States. “Three Coast Guard cities are in Oregon,” Tim Hall, Garibaldi Mayor, explained. “Astoria, Newport, and Florence. Garibaldi has a long, great history with the Coast Guard. It is a big part of this town.” Residents know about the dangerous bar and ocean conditions that have taken many lives, but the Coast Guard also responds to floods, other disasters, and rescues in Tillamook County. 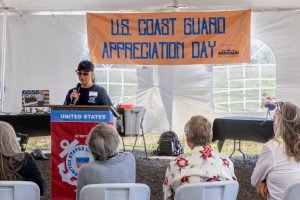 “The very nature of the Coast Guard’s mission creates a need for understanding between the Coast Guard and the local community,” reads the U. S. C. G. website. Coast Guard commands everywhere are urged to develop the kinds of relationships that enable unit commanders to sense public attitudes and interests.”

The event started at 2:30 with family games. Young children created giant soap bubbles that were blowing away in the wind. At the other end, several spirited corn hole games were going on. Inside the tent, speeches and honors were bestowed, and outside the young children tried to play catch with water balloons.

The community was involved in putting on the event. “The Port donated the tent, the library helped, the city contributed food that was provided by the Portside Bistro, and music was provided by Mojo Holler,” Hall went on.

Laurie Wandell, also of the Garibaldi City Council, who coordinated the Pat Patterson celebration, explained that “We would like to make this an annual event.” She discussed ideas such as the possibility of locals adopting new Coast Guard members for a family holiday dinner, for example. The city and Coast Guard also wanted to honor the memory and service of Ole Olson, a Coast Guard Captain who retired to Rockaway Beach.

Back on the Bubble Ball field with players encased in the large plastic bubbles provided by the Oregon Coast Event Company, the fire department team, featuring members from Garibaldi and Bay City, fought valiantly, but just couldn’t quite overcome the Coast Guard onslaught, eventually losing by one point. Both teams gathered together for a group photo. Then it was time to laugh and joke, then line up for dinner.

Judging from the laughter and smiles, the event was a success.

August 4th marks the 232nd birthday of the United States Coast Guard. On the 4th of August 1790 the first Congress of the United States passed legislation to bring the Revenue Cutter Service into being – the first forerunner of the modern USCG.
In those 232 years we have evolved as a service from “A few armed vessels, judiciously stationed at the entrances of our ports” to a service of several hundred cutters, a fleet of small boats, squadrons of fixed and rotary wing response assets and a workforce of more than 50,000 proud Coast Guardsmen protecting national interests both domestically and abroad.
Today the men and women of the Coast Guard in the Pacific Northwest proudly add their stories daily to those written by generations of the long blue line.
Happy Birthday to the United States Coast Guard! May we remain “Semper Paratus” for another 232 years.

For more of Don’s photos – see his website www.donbackmanphoto.com .