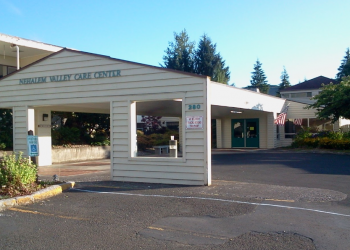 (Wheeler, Oregon) – The board of the Nehalem Bay Health District has unanimously approved a new three-year management agreement with the Oregon company that operates the Nehalem Valley Care Center in Wheeler. The board took the action at its February 6, 2020 regular meeting.
The Nehalem Valley Care Center is a critical, skilled nursing facility on Oregon’s north coast providing rehabilitation and short and long-term care services to local residents. The Care Center is the only facility of its kind on the coast between Astoria and Newport. The Center has been managed since 2010 by Aidan Health Services, a Salem company that manages 11 different senior care facilities in Oregon.

The new agreement underscores the board’s satisfaction with the overall operation of the facility and the fact that the Care Center has shown consistent quality improvement as measured by the federal Centers for Medicare and Medicaid Services (CMS). CMS regularly ranks senior care facilities on the basis of quality measures, staffing and health inspections. In the most recent ratings, the Care Center received an overall “above average” or four-star rating on a five-star scale.
The new agreement also established the opportunity for scheduled review of the relationship.
(CMS ratings for the Nehalem Valley Care Center are available online: https://www.medicare.gov/nursinghomecompare/results.html#loc=WHEELER%2C%20OR&lat=45.688996&lng=-123.8806879)

The Nehalem Valley Care Center is unusual in that all patients have private rooms. The district and Aidan also emphasize that every resident and family receive a care plan tailored to individual needs in order to maximize independence and quality of life. The Center’s rehabilitation facilities allows specialized treatment for each individual.
As part of its recent strategic plan the district is working to develop a long-term maintenance and enhancement plan for the Care Center.

Preliminary Agreement Also Finalized with North County Food Bank
Also, at its February meeting the district unanimously agreed to move forward with a plan to eventually sell a portion of its property in Wheeler to the non-profit North County Food Bank for construction of a new building. The Food Bank currently occupies a portion of the old Wheeler hospital that will eventually be demolished. The district has agreed not to disrupt Food Bank operations and to help facilitate the move to a new facility specifically designed to fulfill its mission.
The agreement envisions the Food Bank undertaking and paying for survey and land use approvals to facilitate the transfer. The district considers the Food Bank a key community asset furthering its mission “to facilitate the delivery of health and community services by encouraging collaborative partnership and stewardship of public resources.” The Food Bank provides essential food and clothing services to hundreds of local residents annually, including many children.
The district and the board of the Food Bank originally considered a long-term lease agreement to facilitate a new building, but eventually concluded that having the Food Bank own the property outright would likely make permitting and financing a new facility easier.
The health district board will consider a formal sale agreement at a future public meeting.