As I sit in a dark room of a house without power, but still kept cozy by a roaring fire, I think of the men and women of the PUD out there in the dark, moonless night, buffeted by gusting winds and driving rain, cold and wet as they climb poles and ladders to restore electricity to the neighborhood. The work that they do is truly heroic.
John Rogan
Whiskey Creek Road, Tillamook

EDITOR’S NOTE: John’s note summarizes how nearly every Tillamookian felt from Thursday evening through yesterday Friday, December 20th. Tillamook PUD had over 8,000 customer without power at varying times throughout the storm with the largest issue in North County with the loss of the transmission line from Pac West/Pacific Power.
Welcome Winter! It blew in with a fury and buckets of rain. You probably noticed there weren’t any Pioneer posts yesterday, Friday December 20th. Conserving cell phone battery, I was simply sharing and posting on the Pioneer Facebook page and on the Pioneer’s Instagram page. We are in North Tillamook County, on Highway 53 that was one of the last areas to be re-energized in North County. The power went off at 9 pm on December 19th and it was over 25 hours until it returned, after 10 pm on Friday, December 20th. We were readying the generators … I had spent the previous 24 hours posting storm warnings and watches, but didn’t heed the warnings and found my own household not “as prepared” as we could’ve been, ie. fresh batteries in flashlights, buckets of water in the tubs to flush toilets (we are on a well, so no power also means no water from the tap.) We’ll be ready next time – and there is likely to be a next time. Also, we will work to ensure that we can post on the website as well as social media, since we know many of our readers do not do Facebook, etc. and how important it is to get information out to our community. Send us photos of storm damage, flooding, etc. and we’ll post a collection of photos – to editor@tillamookcountypioneer.net.
Here’s a view from around the county. 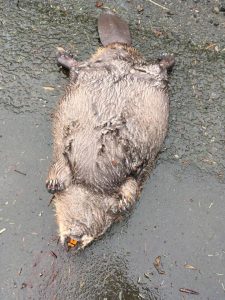 From Gordon McCraw, today Saturday December 21st: Saturday’s Update. Finally the front and atmospheric river is sliding to the southeast. The Wilson and Nehalem Rivers both crested just above Flood Stage and the Nestucca and Trask Rivers were quite elevated but did not enter Action Stage.
Looking at the TPUD Outage page this morning (Saturday December 21st), I see just some sporadic outages totaling a little over a hundred customers. TPUD folks were rock stars yesterday…and remain so today.
At the peak of the storm on December 19 at 7:30 pm, Gordon’s Tillamook Weather Center reported:
“The winds kicking now, maximum gusts at Mt Hebo 77, Cape Meares 69, Pacific City 56, Tillamook Airport had a gust to 49 and Astoria gusting to 52. Hold on to your hats!”

We are sad to report … there was a storm casualty. As spotted by Pioneer Photographer Don Best …


As far as rain, we had a lot: Lees Camp had 9.7″, Southfork 7.87″, Mt Hebo 4.09″, Tillamook 5.74″, Astoria 5.28″, Pacific City 3.56″, Oceanside 3.04″. There was some minor damage to some structures from the strong winds which also downed a few trees throughout the county but again, we did okay. And I almost forgot but the Coastal Flood Watch is still in effect because of some higher tides with about a 1.5′ anomaly over that, combining with the higher river levels equaling overflow flooding in the usual spot, Fraser Rd west of Tillamook as well as downtown Nehalem and near Woods/Pacific City. High tide is around 8:30 this morning so for the next few hours, if you drive in these areas, use extreme caution. As the NWS says, “Turn around, Don’t Drown!”
As far as a forecast, cloudy with some more rain today, mainly of the light variety, winds becoming northerly 4-8, the high near 51. Patchy rain tonight, still cloudy, light winds, lows near 38.