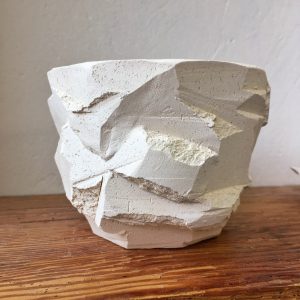 Shane Sjogren has been North Coast resident for nearly a decade and is employed as Stewardship Lead at the Lower Nehalem Land Trust. The vegetation, forests, the beating pulse of the Pacific, and the culture of community in this area inspire Shane’s art. His ideas often start with natural objects surrounding him. Shane appreciates the plasticity of clay and enjoy ceramic objects that are representative of the material itself. He continually experiments with new techniques, forms and usability and says “the possibilities feel endless.” 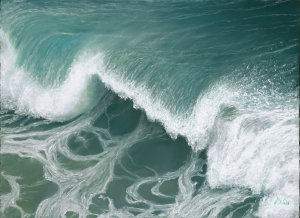 Stephen Gehring’s inspiration for these ocean pastels resulted from the following experiences: “In 2016, I went surfing at Indian beach. I caught wave after wave, then about 10 feet behind me, I heard splashing. I looked over and a shark fin flopped out of the water beside another surfer’s board. He yelled at me to get out of the water. We paddled for our lives and managed to make it out. A few days later, a tornado struck Manzanita. I drove down to check on friends. A bolt of lighting cracked down in front of my car and when I got to their beach house, I was shaken.” 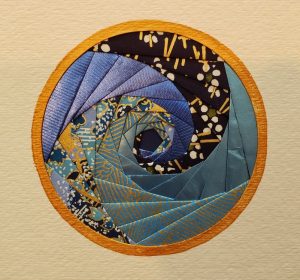 Patti Isaacs is a silk painter and paper artist and has been creating Iris Fold cards and framed wall art for over a decade. Her demonstrations at the Japanese Gardens ‘Paper Garden Show’ were extremely popular. She has spent the past 10 years developing her style and medium of expression. Much of the paper Patti works with is Washi paper she brought from Japan. She has exhibited in numerous venues, most recently at the Guistina Gallery ‘Ode to Tides’ at the LaSells Stewart Center at OSU. She will be teaching an Iris Fold class at the Hoffman Center in October. 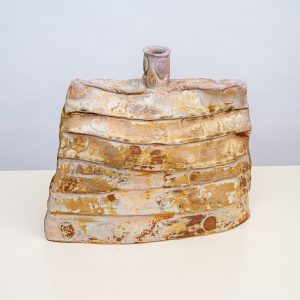 Barry Calvarese works in clay, encaustic, clay mono-printing and multi-media and his work tends to focus on the environment with an organic, at times industrial message. His subject matter is often about people’s daily lives, beliefs, routines and a comment on human nature. Weathered pieces of wood and old stones covered in beautiful moss remind him of the power of nature. The unknown aspect of firing atmospherically really excites Barry, whether in an underground pit, soda kiln or week long wood firing.
The Hoffman Center for the Arts is located at 594 Laneda Avenue in Manzanita. To learn more about this and other shows at the Hoffman Gallery, visit www.hoffmanarts.org/hoffman-gallery/