By Linda Tate, Northwest Osteopathic Medical Foundation Communications Director
This week we are going to talk about Bipolar Disorder. You may recall seeing meme’s that say things like, “The weather is Bipolar.” On its face that might be funny to some, but to someone living with this disorder, it must be frustrating to see people taking it so lightly. Bipolar Disorder can be a very serious illness, and in some cases, it’s disabling.

There are four different “types” of Bipolar Disorders. It’s important to know which disorder you have, because treatment differs, depending on the patterns of your mania and depression. Let’s get definitions for “Manic” and “Depression.”
“Manic Episode”
Steve Bressert, Ph.D. states: “symptoms of mania include: elevated mood, inflated self-esteem, decreased need for sleep, racing thoughts, difficulty maintaining attention, increase in goal-directed activity, and excessive involvement in pleasurable activities. These manic symptoms significantly impact a person’s daily living.“
“Depressive Episode”
During the depression phase of bipolar disorder, you might:
Feel sad, worried, or empty
Have little to no energy
Feel like you can’t enjoy anything
Sleep too little or too much
Have a hard time getting out of bed
Eat too little or too much
Have trouble focusing or remembering things
Have a hard time making decisions
Think about suicide or death
So now that we have working definitions, let’s look at the four different types, and their symptoms.
Bipolar I disorder
This type of bipolar disorder is diagnosed when manic episodes last at least seven days and are accompanied by psychotic features (a loss of touch with reality), or the manic symptoms are severe enough to require immediate hospitalization to prevent harm to oneself or others. Depressive episodes, typically lasting at least two weeks, also often occur. A person may have manic episodes with some depressive features or depressive episodes with some manic features.
Bipolar II disorder
Mania is not involved in bipolar II disorder. Instead, the illness involves recurring episodes of major depression and hypomania, (a milder form of mania). In order to be diagnosed with bipolar II disorder, you must have experienced at least one hypomanic episode and one major depression episode in your lifetime. In bipolar I disorder, a major depressive episode (one or more) usually occurs, but it is not required. Bipolar II disorder involves one or more major depressive episodes. Common symptoms that occur in a major depressive episode include:
Insomnia or hypersomnia (excessive daytime sleepiness)
Unexplained or uncontrollable crying
Severe fatigue
Loss of interest in things the person typically enjoys
Recurring thoughts of death or suicide.
Cyclothymic disorder
Cyclothymia – Click HERE for correct pronunciation – is a milder form of bipolar disorder. Like bipolar disorder, cyclothymia consists of cyclical mood swings (rapid and often extreme, fluctuations in one’s emotional state, involving alternating between feelings of happiness and well-being and feelings of anger, irritability, or depression). The highs and lows are not severe enough to qualify as either mania or major depression.
The condition usually develops in adolescence. People with the disease often appear to function normally, although they may seem “moody” or “difficult” to others. People will often not seek treatment because the mood swings do not seem severe. If left untreated, cyclothymia can increase your risk of developing bipolar disorder.
Bipolar disorder due to another medical or substance abuse disorder
Some bipolar disorders don’t have a specific pattern. They also don’t match the other three disorders. Yet, they still have to meet the criteria for abnormal mood changes.
For example, a person may experience mild depressive or hypomanic symptoms that last less than the two years specified for cyclothymia. Another example is if a person has depressive episodes, but their symptoms of mood elevation are too mild or brief to be diagnosed as mania or hypomania.
Longitudinal course of bipolar disorder. (Adapted from Manning JS, et al. Prim Care Companion J Clin Psychiatry. 2002;4(4):142-150; and Manning JS. J Clin Psychiatry. 2003;64(suppl 1):24-31.)

So now that we know what the symptoms are for each type, what do we do about it? See your primary care physician. Treatment is out there. You don’t have to live with these ups and downs.
An article in the Journal of the American Osteopathic Association has this to say about treatment:
“The American Psychiatric Association (APA) published practice guidelines for the treatment of bipolar disorder in 2002. These guidelines recommend a series of steps to follow before choosing treatment, including a thorough diagnostic evaluation of the patient, an assessment of the safety of the patient (and others), and establishing a therapeutic alliance with the patient. Also important to successful treatment are several non-pharmaceutical approaches, including the promotion of regular patterns of activity and sleep, anticipation of stressors that may induce mania or depression, the early identification of new episodes, minimizing functional impairments, and providing education to the patient and family regarding the nature of bipolar disorder and its treatment. Mood stabilizers are the mainstay of therapy for bipolar disorder. An ideal primary mood stabilizer reduces acute manic symptoms, does not induce depression, and prevents future relapses of mania or depression.” 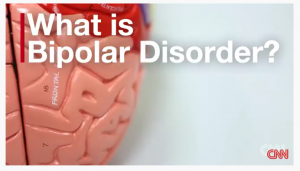 This video is approximately 2 minutes long, and gives us a good outline, using the brain as a prop. Great information.