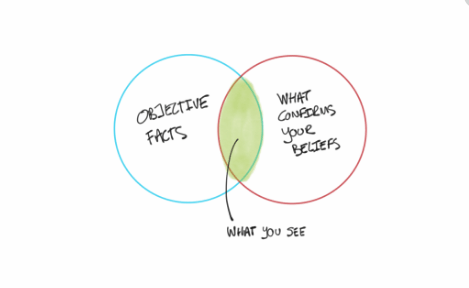 This week, we are going to talk about something that has always baffled me. One’s inability to change their mind on any given topic even in the face of hard cold facts. I’m going to use my own family as an example, and let you extrapolate from there.

I woke up to a phone call from my dad (may his memory be a blessing). “Come over quick! There’s a MONKEY on the porch!“. I may have thought he was kidding, except he was out of breath, and excited to the point that one would actually believe there might be a monkey on the porch.

I ran next door, and he was coming out of the kitchen saying, “Did you bring your camera? You won’t believe this“. I peered out into the darkness and onto the porch, where my eyes fixed on a…raccoon. He was standing on his hind legs, looking in the window. I took a couple of pictures because one, he was cute, and two, I had to break it to my father that his vision just wasn’t what it used to be.

After securing two really good shots, I followed him into the living room where he sat watching cable news. He smiled and said, “did you get one?” and I nodded, “yep, sure did“. I showed him the picture of the raccoon. He stared at it, then looked at me with confusion and said, “that’s not a monkey…that’s a raccoon“. “Yes it is“, I answered. He didn’t miss a beat. He looked at me with a look of disappointment and said, “Well, you really blew that one. You won’t get another chance to take a picture of a monkey on the porch“.

I was a little stunned. He wasn’t going to change his mind, regardless of what I said or how many pictures I showed him. Raccoons, in his mind, don’t stand on two legs…so it must have been a monkey, right?

Believe it or not, there’s some theories out there that explain his reaction.

“The most difficult subjects can be explained to the most slow-witted man if he has not formed any idea of them already; but the simplest thing cannot be made clear to the most intelligent man if he is firmly persuaded that he knows already, without a shadow of doubt, what is laid before him.”

In order to understand why people are slow to change their minds in the face of hard cold facts, we must first define some words.

The first word is BIAS: What is bias? According to Psychology Today, “Bias is a natural inclination for or against an idea, object, group, or individual. It is often learned and is highly dependent on variables like a person’s socioeconomic status, race, ethnicity, educational background, etc. At the individual level, bias can negatively impact someone’s personal and professional relationships; at a societal level, it can lead to unfair persecution of a group, such as the Holocaust and slavery.”

So bias is the natural way one leans, to begin with. If I grew up being told that dogs bite, as an adult I may not want a dog in my home regardless of how sweet-tempered they are because I lean towards thinking that all dogs bite. It’s important to note that everyone has some degree of bias. It’s normal.

The next word is CONFIRMATION BIAS: Psychology Today states that “Confirmation bias, also known as ‘motivated reasoning,‘ refers to the brain’s tendency to search for and focus on information that supports what someone already believes, while ignoring facts that go against those beliefs, despite their relevance.

“Once we have formed a view, we embrace information that confirms that view while ignoring, or rejecting, information that casts doubt on it. Confirmation bias suggests that we don’t perceive circumstances objectively. We pick out those bits of data that make us feel good because they confirm our prejudices. Thus, we may become prisoners of our assumptions“.

For example, if I believe that all dogs bite and are dangerous, I will only research articles that back up my original bias against dogs so that I feel good about being right. Joining clubs, social media pages, or even meeting with the same friends (who think all dogs bite) for coffee every Friday afternoon, are all ways to continue feeding our bias by stepping into an “echo chamber” which confirms that which I believed to be true about dogs. They call it an echo chamber because you are all saying the same thing, and there’s nobody there to challenge your thinking, which in turn confirms your bias even further. ME: “Dogs bite, I hate them“. MY FRIEND: “YES! Why can’t other people see this?!” Echo, echo, echo…I walk away from that conversation feeling better about my own fears because someone shares my thinking on the subject matter.

So how do I eliminate my bias? Do I even want to do so? If so, why? Well, the short answer to that is because eliminating my bias gives me a new learning experience. I might learn to love dogs. A dog may enrich my life in ways I could never have imagined.

The one thing preventing me from learning about dogs? My ego. Oh, it’s a big one. First of all, I hate to be wrong. It’s embarrassing, especially if I have gone through my entire life putting dogs down and convincing others to hate them as well. When you try to eliminate confirmation bias, it is guaranteed that your ego will be put to the test. When this happens, remember you do not know everything, and even when you are 100 years old, you will still have lessons to learn about life.  In my opinion, this fact is what makes life worth living in the first place.

If you truly would like to overcome confirmation bias, there are a few suggestions that may help you in your journey.

If you don’t take away anything else from this week’s blog, please remember this: The only person you can truly change is yourself. Trying to change other people’s minds is often a waste of time and energy. In the time it takes you to argue your point on social media, you could have really accomplished something. Like what? Like writing a chapter in your book you want to someday publish. Like making a blanket. Planting a bed of bulbs to come up next year and give you joy. Like, spend time with your children or pets. Like finishing that big project at work, in school, or on your calendar. Arguing with people on social media can be addictive and, as with anything, moderation is key.

There are times when it’s necessary to sway another person. If they are on a path of self-destruction, for example, you may have to wade into an uncomfortable discussion. During such times, you may need a few tips.