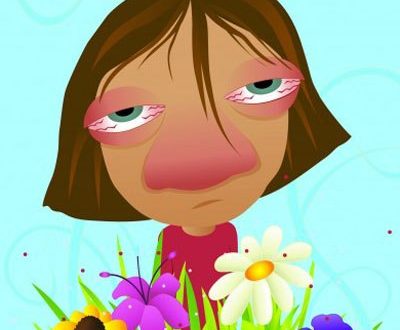 We are going to talk about allergies. Are yours worse this year? I know mine has been. I went the first five decades of my life never having seasonal allergies, only dust mites and mold, but lately, it’s the seasonals that are getting to me.

The other day, it was so bad that I felt like I was rubbing my eyes off my head. They were itching and running, then my nose started running, and I finally yelled out, “WHY IS MY FACE LEAKING?!”

I went to the internet to see if others were suffering as well, and I was sad to see that yes, many of you were asking the same thing…” what is going on?!“

Welp, I can tell you that in Oregon, it’s the trees and the grass. I know that because I researched it. This time of year, ragweed is also a big contender for the top dog in the nose running contest.

Suggestions for minimizing the effects of pollen:

er after coming inside for the day, changing your clothes, keeping doors and windows shut, and using the air conditioner or a HEPA purifier to filter allergens are all sound suggestions for reducing the effects of pollen on your body.

Is it just me, or does it seem like allergy season starts earlier each year?

If you feel like our allergy seasons are lasting longer than they used to, you would be correct. They have been conducting studies and it would appear that climate change is causing allergy season to continue long after it should have been over.

UPI reports that “new research from Germany offers an explanation for this extended sneezin’ season: Pollen is on the move, with early blooming spores now wafting across traditional locales and into regions where those pollen species have typically bloomed later, if at all“.

Ye Yuan of the Technical University of Munich holds a professorship in ecoclimatology, and he states, “The transport of pollen has important implications for the length, timing, and severity of the allergenic pollen season“.

“As temperatures rise, flowers tend to bloom earlier. Warmer temperatures also cause carbon dioxide levels to rise, which boosts pollen generation. Such dynamics have extended pollen season by as much as 20 days over the past three decades“.

Is there anything else I can do to control my allergies?

it’s just a common cold. “If your congestion lasts more than two weeks, your symptoms increase after being exposed to a common trigger, or your eyes, nose, and throat are itchy, you might suspect allergies over a cold or virus. See your provider and narrow it down”.

“Decongestants such as pseudoephedrine (Sudafed), phenylephrine (Sudafed PE), work by relieving congestion in your nose and sinuses. Antihistamines alleviate allergy symptoms such as coughing, itching, or a runny nose”.

(Editors note: They make nose spray with Phenylephrine in it, such as Wal-four (Walgreens) and 4-Way Nose spray, which works differently than nose sprays that do not contain that ingredient).

“Wind helps carry pollen through the air. According to the Asthma and Allergy Foundation of America (AAFA), pollen can travel up to 400 miles from its original source. The best time to be outside is after a rainy day. Rain helps clear the air of pollen by minimizing the pollen count.“

So there you have it. That’s all I know, and for me, it’s not enough. My eyes continue to leak, my nose continues to run, and once in a blue moon I get that satisfying sneeze we all aspire to experience.

Editors note: This blog is not a replacement for sound medical advice, and many diseases, disorders, and syndromes have symptoms that overlap. Only a qualified medical professional can diagnose you. That said, if you think this blog may be helpful to others, please share it on your personal pages. Thank you for reading us, we really do appreciate you!