The U.S. Coast Guard’s radiomen school barracks in Atlantic City, New Jersey, smelled of sweet, charred marshmallows. Several students had teamed up to find wood for kindling and an old metal trash can to roast s’mores.
After getting a taste of sweet relief, the fire alarm started to blare. A window one the new service members opened did not let out enough smoke, so the junior enlisted Coast Guardsmen scrambled to hide evidence of their taboo treat.

After the flames were out, the fire chief asked one-by-one if anyone saw who started the fire. Michael Brewer, one of the radiomen students, whose fingertips were still sticky, nonchalantly answered, “what fire?”
Even before he enlisted, Brewer was known for being mischievous. It’s what ultimately drove his mother to push the pen in paper and sign his enlistment papers in 1945, the final year of World War II.
Although playful at heart, Brewer’s time in service, devotion to duty and lifetime of hard work ultimately inspired his family and his community for generations to come.
The United States entered World War II in 1942 when Brewer was 14. Eager to be part of the war effort, he worked hard to graduate high school early, and by the skin of his teeth, left home when he was 17 for basic training in New Jersey.
Following basic training, and upon completion of radioman training where he managed to stay out of too much trouble, Brewer’s assignment as a radioman was aboard Coast Guard Cutter Atalanta (WPC-102). At the time, Atalanta was conducting mining operations in Astoria, Oregon. Radiomen in the Coast Guard during World War II oversaw several forms of telecommunications and maintenance. Brewer’s general duties were to transmit and receive radio signals and process all forms of communications through several mediums.

After eventually separating from the Coast Guard and returning to his hometown of Spokane, Washington, Brewer’s life continued to snowball in a grand, positive direction. He attended college where he graduated with honors, then eventually married and grew his family. Brewer retained much of the knowledge he learned while serving aboard a cutter and put his telegraphy skills to work on the Great Northern Railway.

Family members noted that Brewer kept a radio room in the house he would tinker with whenever time permitted. 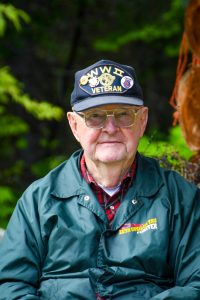 One thing that also grew, was the number Brewer’s family members who inherited his passion for service, and would subsequently also enlist or commission into the military. The Brewer family had a total of 10 family members join the military.
Tobia Brewer Sr., Brewer’s son, who served as a U.S. Army Captain, didn’t initially grasp how his father’s military service impacted the family. But, upon deeper reflection, realized values and work ethic, even mannerisms, passed down to him and his siblings came from his father’s military training and service.
“It was the discipline aspect that was very military,” said Tobia Sr. “Watch your gig line, be always ready.”

There are now many U.S. Army and U.S. Air Force veterans in the Brewer family, but only one followed specifically in his grandfather’s footsteps, U.S. Coast Guard Lt. j.g Tobia Brewer II, who is currently serving on active duty.
“Gramps always spoke very fondly of his service in the Coast Guard,” said Tobia II. “All the way until the end.”
When Tobia II graduated from Gonzaga University in 2010, he was having trouble finding work. When discussing his trouble with Brewer, or ‘Gramps’ as he referred to him as, Brewer reflected about how much he loved the Coast Guard and his time in the service. Tobia II decided he was going to also serve in the Coast Guard.
After enlisting, Tobia II loved to watch his grandfather’s face light up with joy as he listened to stories of the modern-day Coast Guard.
From seaman to lieutenant junior grade, Tobia II credits his grandfather for inspiring him to serve and rise in rank. Tobia II added that the Coast Guard’s missions align well with his family’s values, something he believes his grandfather gained from his time in and added one of the biggest impacts his grandfather had on him and his family is teaching them to do what’s right.

Tobia II remembered a story his grandfather told about doing what’s right. In 1945, while Brewer was serving aboard Atalanta, Brewer found out the unit’s cook wasn’t receiving letters from home. Racial tensions were still extremely high during war efforts and being a cook was the only job African Americans could do in the military. Brewer learned the cook, who was from the deep south, did not know how to read or write.
Brewer knew it would be a lot of work but decided to help the man send letters to his family. Brewer would sit down with the cook and transcribe everything his shipmate wanted to send in letters back to his home. On mail days, whenever an envelope would arrive with the cook’s name on it, Brewer would eagerly tear it open and read it with his new friend. This would be a process that would continue until they left the Atalanta in 1946.
Brewer’s passion for helping others didn’t stop with his Coast Guard service. The City of Spokane was also greatly impacted by Brewer. He was a city councilman for several years, a transportation advocate and pressed for more affordable housing. 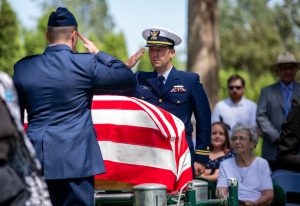 Brewer passed away in May 2021 at the age of 93 and was laid to rest with military honors. His mischievous, do-good personality stayed with him until the end. His service to the country and service to his community is a prime example of the Coast Guard’s Core Values of Honor, Respect and Devotion to Duty.

Brewer’s courage and influence set him to be one of the unsung heroes of World War II and the Pacific Northwest. His efforts, and the efforts of anyone of the Greatest Generation, protected the freedom and security of Americans now and for greater generations to come.