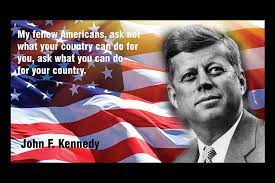 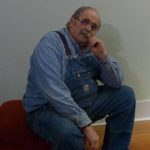 By Jim Heffernan
In 1960, when I was 14, John F. Kennedy, the first Catholic President, was inaugurated as President of the United States.
I was in 8th grade at a Catholic school in Denver. I suppose the second coming of Christ might have generated more enthusiasm, but not by much. It was the only time I ever saw television sets brought into the school. Kennedy’s speech only lasted 14 minutes, but will be forever remembered for its final words. “Ask not what your country can do for you – ask what you can do for your country.”
I don’t think anyone realized it at the time, but I think it may have been the high point of American unity. The next 62 years were going to be a very rough ride that would bring most of us to a destination of distress and disunity.

John Kennedy wanted us to pull together in the pursuit of a common good for all of us. We have failed him. Too many of us have abandoned the hard choices we should have made and opted for the “easy” choices that have brought us to a point where our nation faces destruction from within.
Back then, politics, corporations, and the free enterprise system all worked differently. All of them were constrained by unwritten rules that dictated that what we did should promote the welfare of the nation as a whole. It was working. Slowly, incomes were becoming more equal and we were slowly learning that the full blessings of being an American were withheld from some of us.
I think it was about 1965 when the unwritten rules began to be eroded by too many of us making the “easy” choice and doing “whatever it takes”.
None of these changes happened overnight. But the progress of the changes seems to have been steady and unrelenting. I believe these changes began to cascade about 1970 and the start can be tied to three individuals. Some of us have either joined in to spread the havoc, but I believe most of us were simply unaware of the consequences of the changes.
Richard Nixon, President from 1968 to 1974, started the trend in politics. It’s been a slow process, but every year things seem to get worse. The other two individuals, Milton Friedman and Lewis Powell are more obscure but perhaps just as damaging.
Politics switched from a contest of principles to an insidious trend of doing “whatever it takes to win.” Say anything, do anything if it leads to winning. This attitude makes for victories at the ballot box, but this attitude damages our country.
My “blue” sensitivities make me want to blame the “red” party, but I think that’s a false notion. Both parties have resorted to and I think continue to resort to doing “whatever it takes to win.”
Milton Friedman, a man famous in the small circle of economists, wrote an essay in 1970 for the New York Times titled “A Friedman Doctrine: The Social Responsibility of Business is to Increase Its Profits.”* In it, he argued that a company has no social responsibility to the public or society; its only responsibility is to its shareholders.
Corporations once were governed by striking a balance of benefitting all the stakeholders, the shareholders, the employees, the community, and the nation. That attitude is gone. The guiding principle now is to do “whatever it takes to maximize profits for the shareholders.”
We like to blame China and unfortunate trade agreements for our devastated factory and mill towns, but I think it’s our own greed that has more to do with it than anything. In my working career, I met many fellow-mechanics who lost jobs at factories that closed down, not because they were losing money, but because the corporation could make more money by shipping the jobs elsewhere.
Lewis Powell wrote a “confidential” memo for the American Chamber of Commerce in 1970 titled “Attack On American Free Enterprise System.”** Lewis Powell was at the time a prominent lawyer who would become one of Richard Nixon’s Supreme Court Justices in 1971. His principle conclusion was, “business and the enterprise system are in deep trouble, and the hour is late.”
His memo remained largely confidential for about a year, but is now freely available. The unwritten rules of free enterprise that benefitted all of us began to erode and his memo was a chilling 34 page blueprint for changing our mutually beneficial system of free enterprise to a system of “doing whatever it takes to rig the system for the benefit of big business.”
Powell identifies the principle bad actors who threatened the business and enterprise system as Ralph Nader and William Kunstler and other leftists and communists. I remember Ralph Nader as an activist who didn’t think Ford and General Motors should manufacture cars that unnecessarily killed people. I remember William Kunstler as a defense attorney who did a lot of work for the American Civil Liberty Union and won fame for defending the “Chicago Seven”. I don’t believe either of them were as menacing as Lewis Powell portrayed them.
I truly believe that these three trends of doing “whatever it takes” has led us to a place where our political and economic systems are rigged to richly reward maybe 5% of us and the rest of us are either falling behind or just barely keeping up.