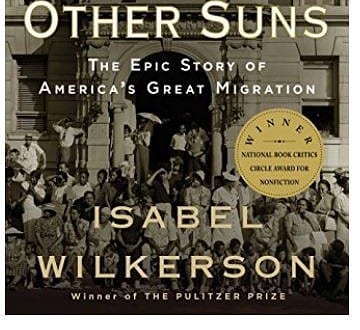 By Jim Heffernan
I was lucky that I grew up close to a branch library in Denver. It was named Smiley Branch Library after a 19th. century teacher/superindendent in Denver. I never thought of the man, but more how that library made me “smile”.
In those days, all you could get at the library was books.
Tillamook Public Library, of course, has books. But it also has a wonderful program called “Library of Things”* where you can borrow all manner of things. To name a few: portable hard drives, ukeleles, microscopes, telescopes, jewelery making kits, and book club kits.
I’ve borrowed the book club kit for “The Warmth of Other Suns” by Isabel Wilkerson. (See below for my book review.) The kit includes multiple copies of the book.
I’m hoping to use the kit to fuel a book club for people to meet and talk about this wonderful book. Meeting will be either zoom or at the library depending on how the interest develops. Anyone who is interested can contact me at codger817@gmail.com.

BOOK REVIEW: The Warmth of Other Suns by Isabel Wilkerson 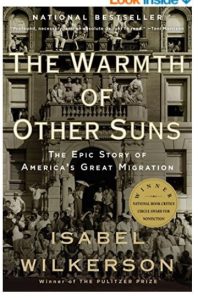 This is a book I read several years ago and it’s one of my all-time favorites. It’s written by the first black woman to win a Pulitzer prize. It tells the story of how six million black people fled from the American south between 1915 and 1970.600 page history books usually scare me away, but this book reads like a much shorter book. It manages to be a very entertaining read that is packed with history. It a history not much talked about and that many would like to conceal.
She takes her title from these lines written by Richard Wright in his 1945 book “Black Boy”.

I was leaving the South
To fling myself into the unknown.
I was taking a part of the South
To transplant in alien soil,
To see if it could grow differently,
It it could drink of new and cool rains,
Bend in strange winds,
Respond to the warmth of other suns
and, perhaps, to bloom.

Wilkerson tells the story of three people who left the south. They represent the three large patterns of the migration and the peak years of migration. She weaves a lot of history into their stories. She has a wonderful talent for keeping the narrative fresh throughout the book. She spent 15 years researching and writing the book.
Ida Mae Brandon Gladney left Mississippi in 1937 with her husband and two children. Worn down by the ceaseless toil of sharecropping and picking cotton, they hoped to find a better life in Chicago.
George Swanson Starling left Florida in 1945. He knew he was targeted for lynching because he agitated for higher wages. He headed for Harlem to save his life.
Robert Joseph Pershing Foster left Louisiana in 1953. He was a trained surgeon and had been an Army Captain. He could not enter the hospital in his hometown. He drove his Buick to California and became a renowned surgeon.
They were hoping to escape discrimination and segregation, but they found many of the same attitudes up north and out west. Sadly, the “bad” attitudes came from both whites and blacks. The most common complaint was the fear that the waves of blacks coming from the south would work for less and depress wages.
No one found their new homes to be quite the “promised land” they wanted. But they persisted and found new lives that were better than the ones they left behind.
While the characters are black, Wilkerson makes this book about all of us. She has the rare gift of going beyond the dry history of the times and burrowing into the raw, human emotions of people who feel compelled to leave their homes. Somewhere in our background, we all have ancestors who must have felt the same pains.
I’ve struggled a bit to describe this book. I think maybe Isabel Wilkerson’s summation in the final pages is probably all I needed. Here’s an excerpt that covers the scope of the book and illustrates her style.

”The black people who left were citizens, and many of their forbears had been in this land before the country was founded. They were among the first nonnative people to set foot in the New World, brought by the Europeans to build it from wilderness and doing so without pay and by force from the time of the first arrivals in 1619 to their emancipation 246 years later. For twelve generations, their ancestors worked the land and helped build the country. Into the twentieth century, their fourth century in America, they still had had to step aside and fall further down the economic ladder with each new wave of immigrants from all over the world, after generations of burden bearers.
It is one of those circular facts of history that, in the three great receiving cities to which southern blacks fled–the cities that drew Ida Mae, George, and Robert–blacks had been among the first nonnatives to set foot on the soil and to establish settlements centuries before. Black mestizos were among the forty-four Mexican settlers arriving in 1781 at the pueblo that would become Los Angeles. Jean Baptiste Point DuSable, a fur trader born of an African slave woman in Haiti, built in 1779, the first permanent settlement in what is not known as Chicago. Jan Rodrigues, a sailor of African descent working for and later abandoned by Dutch merchants on an untamed island in the New World,m created the first trading post on what is now known as Manhattan, in 1613.
And so when blacks who had migrated north and west showed resentment at being considered immigrants, it was perhaps because they knew in their bones that their ancestors had been there before there was a United States of America and that it took their leaving the South to achieve the citizenship they deserved by ancestry and labors alone. That freedom and those rights had not come automatically, as they should have, but centuries late and of the migrants’ own accord.
With the benefit of hindsight, the century between Reconstruction and the end of the Great Migration perhaps may be seen as a necessary stage of upheaval. It was a transition from an era when one race owned another; to an era when the dominant class gave up ownership but kept control, using violence even, to the eventual acceptance of the servant caste into the mainstream.
The Great Migration was the final break from an abusive union with the South. It was a step in freeing not just the people who fled, but the country whose mountains they crossed. Their exodus left a still imperfect but far different landscape than before the Migration began.”

*Library of things can be found at https://www.tillabook.org/library/page/library-things