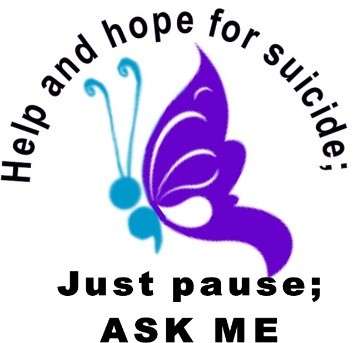 Suicide is the tenth leading cause of death in the U.S.; in Oregon it is the eighth leading cause of death. To have a suicide-safer community, we can learn to turn our eyes and ears on to signs that might lead to suicide. Even greater, we need to know what LOCAL resources are available. The SOS Tillamook Suicide Safer Community project will provide both. 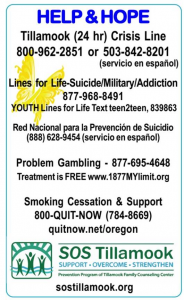 In August, the Columbia-Pacific Coordinated Care Organization (CPCCO) awarded the SOS Tillamook Prevention program a grant to extend Suicide prevention awareness programming to every corner of Tillamook County. Launching in September, which is Suicide Awareness Month with a FREE screening of the movie “Suicide: The Ripple Effect” at the Tillamook County Library on Thursday September 20th at 5:30 pm. There is limited seating, so please RSVP here: Suicide – The Ripple Effect, Tillamook. The movie will also be shown in October in North and South County – watch for those announcements.

The film highlights the journey of Kevin Hines, who at age 19, attempted to take his life by jumping from the Golden Gate Bridge. Today Kevin is a world-renowned mental health advocate, motivational speaker and author who travels the globe spreading a message of hope, recovery and wellness. Discussion to follow screening.
Two weeks following each showing, a QPR (Question, Persuade, Refer) Suicide Intervention training is scheduled for those who want to know more and or do more. “We need to turn our ears and eyes on to signs of suicide,” DeAnna Pearl states. “The more we do, the more opportunity we have to help before a permanent solution is used for a temporary problem.”
FACT: Between 2015 – to date, over 1,000 citizens of Tillamook County are trained in Suicide Intervention.
Over the next year, many people will begin to see proof of the project on cars, bags, mugs and windows. SOS Tillamook has developed a sticker incorporating Project Semicolon’s concept of “PAUSE;” hence a semi-colon, which in a sentence is a call for a “pause” in a sentence. In combination with a butterfly promoting self-care instead of self-harm, and both graphics have brought real awareness to an issue that is often misunderstood and can be complex in nature.
This in an effort to promote a visual expression of building community resiliency in learning how to make a suicide safer community. Sticker will ONLY be available at screening and/or trainings this next year as supplies last.
It is important to note that there is no single cause of suicide. Suicide most often occurs when several stressors and health issues converge to create an experience of hopelessness and despair. However, most people who actively manage their mental health conditions lead fulfilling lives. We must do more to prevent such tragic deaths through greater awareness of mental health issues, common warning signs, effective interventions and treatments. Suicide is preventable, and we all have a role to play to end the tragedy of suicide.
Do you want to schedule a training or screening? Contact DeAnna Pearl at (503) 815-5426 or DeAnnaP@tfcc.org. Also on Facebook at SOS Tillamook.
If you or someone you know right now need help, please call the TFCC Crisis Line @ 503-842-8201 or Lines for Life 877-968-8491. OR contact the Crisis Text Line by texting TALK to 741-741.
Sponsored by Columbia Pacific Coordinated Care
Supported by Tillamook County’s MH/CD/DD Advisory Council