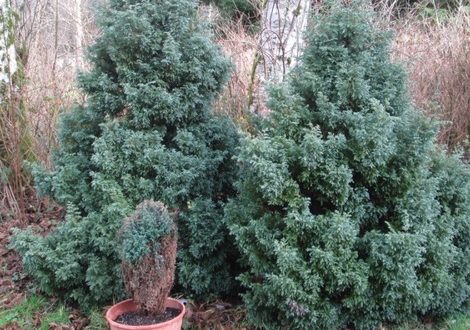 By Victoria Stoppiello
About a mile from our house there’s a patch of state forest land, accessed by a network of logging roads and the “Outback Trail” which provides a steep, ascent from one gravel road to another. Shady and wet conditions make the trail slippery, but looping back on the upper road brings us to the car safely.
I’m always scanning the ground, especially along road edges. This time we came across a small pile of yard debris, including a broken black plastic nursery pot. On top of the pile was a small tree, some kind of evergreen. The root ball’s soil fell apart when I lifted the tree; the roots themselves were dried out and part of the foliage had died. I put the little tree closer to the road edge so I wouldn’t miss it on our return. Then I asked myself why I’ve stopped putting used plastic bags in my jacket pocket, knowing how frequently I find stuff I don’t want to leave behind.

We walked further to a large pull out where we’ve seen people camping in the midst of a clearcut but with an expansive view of the valley. In the past, someone dumped old deck lumber, outdoor wood. Now that pile was gone. Campers probably used that lumber for campfires, although some of it was good enough to be re-used to build a crude shed or a bit of fence. Otherwise, there was only one broken plastic drink bottle in the fire ring, but in the bracken fern nearby was a ripped plastic bag, just intact enough to take the plastic remains and the little tree which I intended to carry back to the car.
When we got to the tree and put it into the bag, Anthony offered to carry it -— a relief because I had both my hiking poles, which make it difficult to carry anything. The little tree poked out of the plastic bag and weighed a couple pounds. With only a walking stick, Anthony had one hand free. We decided to walk down the road, a bit further and uglier than the trail, but with better traction. As we walked, I kept thinking, “We can nurse this little tree back to health. Can we nurse the rest of the forests and waters, the whole environment, back to health?”
Once home, Anthony immediately cleaned a big pot of dead plants and prepared a planting hole for the little tree. “It’s Druid work,” he said, chuckling and referring to a friend who is tackling a year-long course in becoming a formal Druid: Fifty bucks registration, but no sorcery, no robes, no building another Stonehenge. Just make three lifestyle changes to have less impact on the natural world, spend time each week in nature, read at least nine books about the natural history of where you live, among other requirements. Plant and tend a tree. While we haven’t literally planted the hundreds of trees installed along the slough below our house (others did the physical work), we do tend them in that we watch for beaver damage and repair the chicken wire trunk protection. Now we had an actual new tree to plant and tend…Druid work.
Our friend Mark came by for a visit a few days later. Anthony introduced the new tree in its pot and said he had already told the two similar trees Mark had brought to our property, “A young one is coming to join you.” The trees Mark brought are now thriving, but they were in a death spiral when Mark brought them. They’d been imprisoned in two-foot wooden cubicles in someone’s yard and that someone hired Mark to take them to the debris pile at the dump. Mark couldn’t do it. When he arrived in our driveway with the two big plants on his tailgate, Anthony was just driving away on an errand and gave me and Mark a wary look, as if to say, “What are those two up to now?”
After some discussion, Mark and I selected a place to plant the trees side by side west of the sauna. That summer we went to Finland for five weeks. Mark came frequently to water the new trees so they wouldn’t die. Druid work.
When Mark saw the new tree in its pot and heard about the year-long course in how to be a Druid, he said, “Save the fifty bucks; you’re already doing the work. You’re already Druids.”

This essay appeared first in the Chinook Observer. If you want to learn more about the Druid formal training, contact Victoria at anthonyvictoria1@gmail.com.