The next round of King Tides will be this weekend, Friday 12/3 to Sunday 12/5. Watch for tidal flooding throughout Tillamook County during high tide – late morning to noon – in the usual areas including downtown Nehalem, Fraser Road in Tillamook and the Pacific City Airport as well as large waves breaking well up the beaches.  Be safe and observe from a distance.

From the Portland District, US Army Corps of Engineers Facebook Page – with helpful information about the upcoming King Tides:

King tides have nothing to do with royalty, but if you’re not careful, they can be a royal pain in your… Well, suffice to say they’ll ruin your otherwise pleasant day.
The highest tides of the year are making a king-size return to the Oregon coast this weekend (Dec. 3-5). And while they can be breathtaking to witness, they can also literally be breathtaking.
It’s an ideal time to avoid jetties and remember these other critical safety tips: 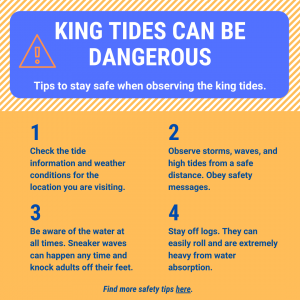 Avoid jetties. Right. We just said that. Well, we’re saying it again. Jetties are there to aid traveling ships—not for recreational uses. They pose numerous dangers and will not hesitate to hand you right over to an unruly wave. (It’s nothing personal. You just shouldn’t have been standing there.) The unsafety of jetties is always amplified when tides are exceptionally high.

Never turn your back on the ocean. Again, king tides aren’t in any way associated with royalty, but like royalty, they aren’t to be trifled with. An extremely high tide is the perfect time to accidentally see how well you can (or can’t) swim. Trust us: You can’t. But the ocean won’t hesitate to put you to the test.

Assume nothing is too high—not even David Lee Roth’s on-stage, midair splits. Don’t take it for granted that tides and waves won’t be able to reach you, sweep you off your feet like your first love, and take your breath away faster than whomever 1980s new wave band Berlin was singing about.

Stay in shallow water unless you’re interested in a one-way ticket to Sea World. (And we’re not talking about the animal theme park chain.)

Get to know the tides. They’re actually pretty nice. Well…as nice as someone can be who at the same time will not hesitate to try and drown you. See tide tables: tidesandcurrents.noaa.gov/tide_predictions.html?gid=1409

Watch out for (and stay off) logs. The ocean is strong enough to pick up even the biggest log and plop it down on top of you. And waterlogged logs can weigh tons. 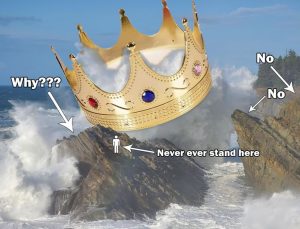 King tides are extremely high tides that occur each winter when the moon, earth, and sun align at their closest points. If you want to check them out, exercise equally extreme caution.

Embellishment of a king tide wave crashing like the dickens into some rocks on the Oregon coast (original image – which excludes text and crown – borrowed from Oregon King Tides Photo Project)
#Oregon #OregonCoast #KingTides #safety
The King Tides Project is looking to document the effect that extreme tide events have on our state’s beaches, coastal waterways, private property, and public infrastructure. Photographs of these tides help to visualize and understand the impacts of sea level rise (like flooding and erosion).
Oregon King Tides Project website

What is a “king tide”?
The term ‘king tide’ is a non-scientific term that refers to the highest winter tides that occur each year. These extreme high tides occur when the moon’s orbit comes closest to the earth, the earth’s orbit is closest to the sun, and the sun, moon and earth are in direct alignment, thereby increasing their gravitational influence on the tides. These tidal events are also known as perigean spring tides.
Oregon King Tides Instagram
Oregon King Tides Flickr
Oregon King Tides OPB article[Meg Reed} said king tides create the highest of high tides and the lowest of low tides, and they are predictable—which makes it a perfect opportunity to learn more about sea-level rise in our region.
“With sea-level rise, we just expect the same hazards that we already experience on the coast to get worse,” Reed said. “So potentially those flooding and erosion events that we already experience will maybe become more frequent will happen more often in the winter or they might become more extreme.” 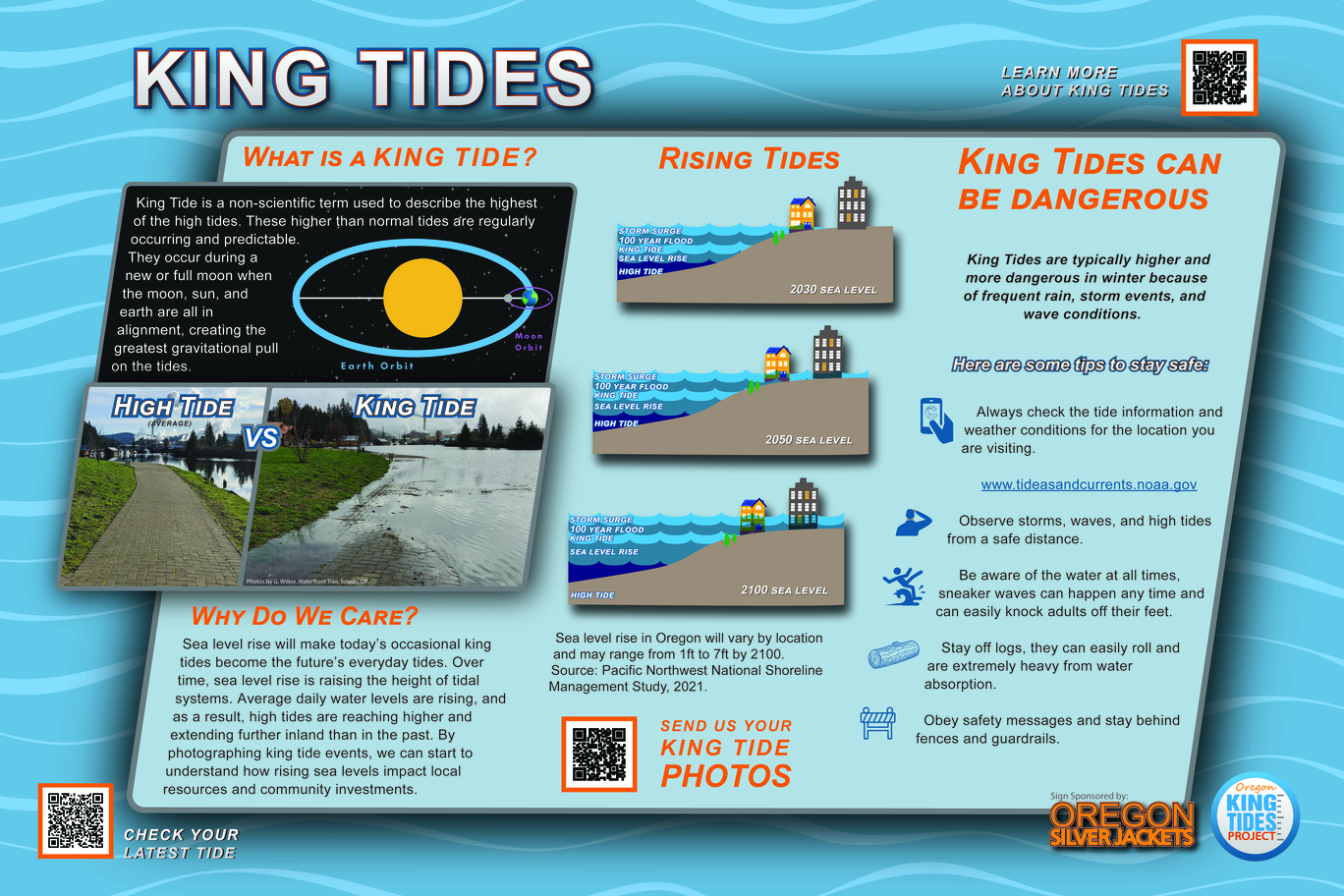