By Judith Yamada, The Kitchen Maven

Tapas are a wide variety of appetizers, or snacks, in Spanish gastronomy. They may be cold (such as mixed olives and cheese) or warm (such as fried baby squid or crispy potatoes). In some Spanish bars, tapas have evolved into a rather sophisticated cuisine. And American restaurants and bars have joined the practice of offering small plates, similar to tapas, on everyday menus so patrons have an opportunity to sample small amounts of several specialties instead of ordering a large meal.
The meaning of tapas has changed over time. According to the official Spanish dictionary any small portion of food that is just enough to eat along with a drink is considered a tapa. The accurate meaning for the word “tapa” is “cover”. The word “tapas” is derived from the Spanish verb tapar, “to cover”, a cognate of the English word “top”.

According to old legends, in Castilla, Spain, the land of Don Quixote, red wine was a popular drink of the men who frequented taverns. And the wine barrels, in those taverns, attracted wine flies and other flying pests. So, it became the custom to cover a glass of wine with a tapa to avoid flies drowning in the one’s drink.

Here are some tapas that I particularly enjoy.

Warm the oil in a non-stick frying pan. When hot, sauté the almonds until golden brown. Drain on paper towels and immediately sprinkle with salt.
Recipe provided by Asoliva of Spain

Soak the beans in cold water overnight. Drain and bring 2 quarts water to a boil; lower heat and cook until tender. Meanwhile, combine the remaining ingredients in a bowl large enough to also accommodate the beans. Drain the beans well and mix with the vinaigrette sauce.
Recipe provided by Asoliva of Spain

Peel the potatoes. Cut each potato into 4 even lengthwise pieces, then cut crosswise to ½” chunks. Sprinkle with salt. Pour olive oil into a wide deep frying pan with a heavy bottom. Heat the oil on medium high until hot. To test the oil, drop in a chunk of potato. If it immediately starts frying, the oil is hot enough. If it doesn’t begin frying, the oil isn’t hot enough and the potatoes will absorb too much oil. Cook the potatoes about 10 minutes; using a slotted spoon, remove potatoes from the pan and drain onto paper toweling. Serve with mustard, hot sauce or tomato sauce, if desired. 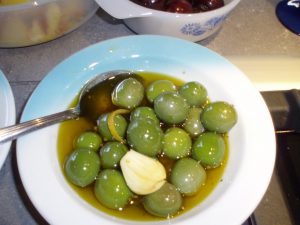 Combine all ingredients in a bowl, adding olive oil to cover. Stir. Cover and refrigerate at least two days. Bring to room temperature before serving.

Lightly crush the olives without breaking them and pour into a glass jar with a lid, discarding any oil produced. Add the chiles and garlic, lightly shaking the jar to evenly distribute. Pour in enough red wine vinegar to entirely submerge the contents of the jar. Add a dash of lemon juice. Seal the jar and store at room temperature for several days, shaking the jar occasionally. Serve the olives with a glass of sherry.