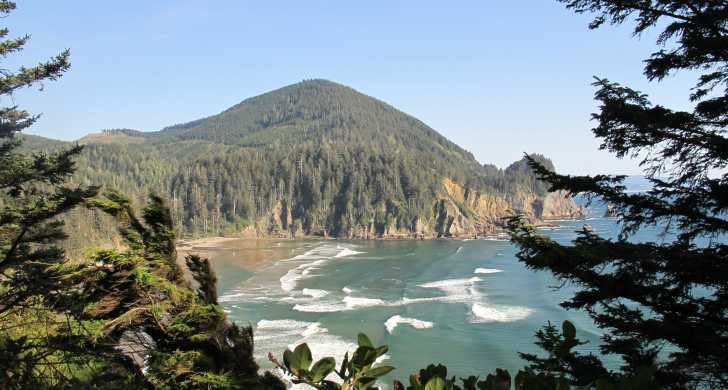 Do you know Oswald West State Park? A place of pristine beauty on the North Oregon Coast where you can still glimpse old growth trees, a clear running stream, and a beach, “Short Sands,” treasured by surfers and tourists—people, children, and dogs.

Did you know that its neighbor up the hill plans to spray a toxic poison by air adjacent to a stream that runs through the park “sometime” in the next few months? They can’t say exactly when this will happen because weather conditions are so unpredictable—wind, rain, fog, temperature inversions…. It’s a tricky business. Those of us who live on the coast can verify that, yes, earth, air, and water all move– especially downhill.
But perhaps it would not matter if they let people know ahead of time, anyway, because according to the packaging the herbicide, Indaziflam, “has a high potential for reaching surface water via runoff for several months or more after application.” They need to spray, they say, because they are a tree farm and need to make money. This is a BIG neighbor, Weyerhaeuser, the largest private owner of timberland in the U. S.
Although the packaging does read: “toxic to fish, aquatic vertebrates, and plants… Human health hazard: Organ damage. Specific target organ toxicity.” They will tell you that what they are doing is legal– for they are following the guidelines of the Oregon Forest Practices Act, the weakest forest protection act on the West Coast.
If this concerns you, contact ODF, ODA, Weyerhaeuser, and your State Legislators. Ask what is being done to protect the people, children, dogs, and wild life from the toxic spraying above Oswald State Park.
Oregon Department of Forestry: Peter Daugherty , state forester, 503-945-7211; MeganDEHNLE@ oegon.gov
Dale Mitchell, Oregon Department of Agriculture, pesticide complaints—pestxodaState.or.us
Senator Michael Dembrow, Chair Senate Committee on Environment and Natural Resource, Sen.Michael Dembrow@oregonlegislature.gov; Senator Betsy Johnson Sen.BetsyJohnson@oregonlegislature.gov
Weyerhaeuser Timber 1-800-525-5440