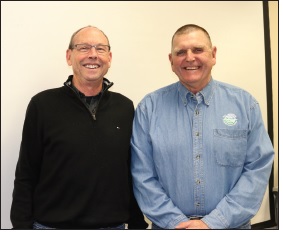 Tillamook PUD is saying goodbye to two special members of our team, Directors Ed Jenkins and Ken Phillips.
Ed Jenkins – Ed joined the Tillamook PUD Board of Directors in 1989, nearly 30 years ago. He has seen many changes. “It’s been a real education,” Ed said. “The electrical utility business is complicated. It can be a challenge staying up to date on all of the changes.” Ed attended many regional trade association meetings to keep up with current issues. “Tillamook is not an island,” he said. “You have to be aware of all the issues regionwide.” Ed is proud of Tillamook PUD and the direction it is heading. “Tillamook PUD is very much a part of the community,” Ed said. “The staff are deeply connected to the community and work diligently in continuing to make it strong.” Ed says employee morale is the best he has ever seen it. “One of our best accomplishments within the last two years was hiring the current general manager, Todd Simmons, to lead the utility,” Ed says. The utility industry is not without its challenges. Ed says staying on top of pricing issues in the utility industry and changes within the Bonneville Power Administration are things he is concerned about.

Supporting important renewable energy efforts, including buying and delivering community-generated power, will also be a challenge. Ed also says careful consideration of the infrastructure improvement projects such as the Tillamook-to-Oceanside transmission line are important. “Addressing our aging system and building infrastructure so that we can meet future load growths and continue to serve our customers with reliable and affordable energy is necessary,” he added, noting the operation and future of the utility depend on it. “It has been a pleasure and a privilege to serve on the board.”

Ken Phillips – Ken has been part of the Tillamook PUD Board of Directors for the past 16 years. During his time as a director, Ken fully immersed himself into the utility industry and the inner workings of Tillamook PUD. Ken gained knowledge and formed a strong connection with staff members and the community while serving as a director. “Being a part of the Community Advisory Group was one of the highlights for me,” he says. “The process and the community input during this was really good.” Ken remembers the trials and tribulations of the 2007 storm that swept across the area. He says he will never forget how the staff and community came together. “The ability of the utility to get things done timely and bring the power back on was remarkable,” Ken says. Ken enjoyed many aspects of being on the board, but especially working with the staff. “I have never been involved with such a dedicated and talented group of people,” he says. Ken recognizes the challenges ahead for Tillamook PUD and the board are some of the same challenges they see today. Changes within the Bonneville Power Administration regarding fish passage, dam removal and regulations are topics the board will continue to actively follow. Another challenge Ken sees ahead for the utility is building infrastructure. “We, as a utility, have to be able to build infrastructure to serve all of our customers,” he says. “It is not always easy, but if we can’t do that, it is going to hurt all of our customers in the long term.” Ken sees a bright future for Tillamook PUD as the utility changes and evolves through innovation and new technologies. “I think public power is an awesome thing,” Ken says. “It just doesn’t get better when it comes to delivering electricity.”
We thank Ed and Ken for their time spent on the Tillamook PUD Board of Directors and serving the community. We appreciate you both so much. Thank you!