By Dan Haag
Manzanita author Mark Scott Smith has published his new novel, “The Osprey and the Sea Wolf: The Battle Of The Atlantic 1942.”
A book launch event will be held at 7 pm on Thursday, September 6 at the Hoffman Center For The Arts in Manzanita.
It is Smith’s second novel, following 2012’s “Enemy In The Mirror: Love and Fury in the Pacific War.”

Set during the early days of the Atlantic theater of World War II, “The Osprey and the Sea Wolf” follows events that brought the global conflict to America’s eastern shore. 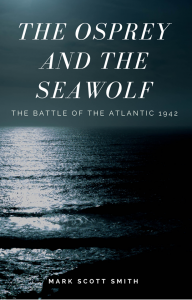 During Christmas 1941, five long-range German submarines, or U-Boats, sailed from occupied France with orders to sink any merchant vessel sailing off the Atlantic Seaboard of North America. Over the next nine months, an unprepared and ill-equipped American military struggled to counter this skilled offensive that sent nearly 300 ships and 5000 men to a watery grave before the tide finally began to turn in favor of the Allies.
Smith’s novelization is an exciting and very human look at the effects of war on both sides of the battlefield.
“Osprey And The Sea Wolf” is told from the points of view of two protagonists: Rainer, a 32 year-old U-Boat commander from the Northern German city of Lübeck; and Ramón, a 24 year-old Mexican-American B-25 pilot from Southwest Texas.
The story spans a good portion of the globe and to give it authenticity, Smith extensively researched the series of events that unfolded during 1942 in a number of areas: off the East Coast of the United States, the Gulf of Mexico, Yucatán, Cuba, France and Germany.
“The research was the hardest part, the most time-consuming,” he said. That research included several trips to Germany and consulting with two armed forces veterans, a retired American Air Force pilot and a retired German U-Boat captain.
“I’d send what I’d written to these guys and they’d help with a lot of the technical stuff,” Smith said.
While there is certainly a fair amount of adventure in the story, it also gives the reader sense of the individual loneliness of war through two men who are polar opposites: German veteran Rainer and young American soldier Ramon.
Rainer comes from a well-to-do, cultured family. While not a Nazi, believes in serving his country. Ramon is a young man dealing with the racism of the era as well as the assorted trials of youth.
Smith said he took pains to avoid depersonalize all the characters in the book.
“I’ve changed my emphasis to understanding our enemies,” he said.
Smith, who was an academic pediatrician in is professional life, says he enjoys the craft of fiction writing novels. He also loves the growth he sees between this novel and the last and calls his writing his “new career.”
“I learned a lot in the process,” he said. “Things like point of view and dialogue, I feel like my work has really come together and I’m getting great feedback.”
The book was published and is for sale on Amazon and Smith will concentrate on promoting it locally. Besides the upcoming gig at Hoffman Center, he’ll be making appearances in Seaside and Astoria in the near future.
He’s also looking ahead at what his next novel will be.
“I’ve written two World War II stories, I’m moving on to the Korean War.”