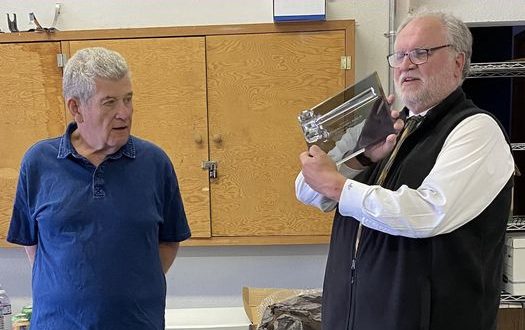 The City of Manzanita honored Manzanita Municipal Court judge Larry Blake July 16, for his quarter century on the local bench.
The ceremony was witnessed by city council members, city staff, family, friends, and court watchers. Former city manager Randy Kugler, who originally hired Judge Blake, thanked him for applying “good judicial constraints, comment sense and occasionally a sense of humor.”
Mayor Mike Scott thanked the judge for his role in helping clean up the problem of illegal short-term rentals and bring property owners into compliance with local ordinances.
Judge Blake was presented with a plaque saying, “Presented to Honorable Larry J. Blake, Jr. Twenty-five years of service. Thank you for your faithfulness and commitment to the communities of Manzanita, Nehalem and Wheeler — 1996 to 2021”

“It’s been my pleasure to serve the city for 25 years,” said Blake, who provides court services to 19 different small towns. “I love to work in a small town,” he said. “Because we can do more in a small town to work with people and try to change behavior when appropriate than we can in the big city.”
According to court records, during his time on the local bench Judge Blake has seen a total of 13,837 offenses, including 6,917 parking citations, 5,590 moving violations, and 1,266 city ordinance violations.