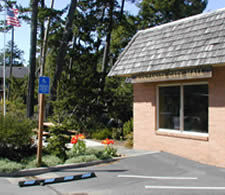 By Cara Mico, Assistant Editor
The City of Manzanita city hall was evacuated over three years ago because of mold issues that remain today. The evacuated space was not meant to be a permanent home for city staff; the city police are located in a separate building and are still using that space. For well over 30 years, the city has been discussing the need to upgrade and build a new city hall but costs were always prohibitive.

The City of Manzanita has a relatively low property tax rate with most of the property taxes going towards Tillamook County. The city receives under $300,000 annually from all property taxes.

The city hall is projected to cost somewhere between three and five million dollars with three to four million dollars for hard costs and a significant budget for planning allocated for design and other related costs such as furniture, technology, and logistics.

For context, $5 million today is roughly the same as $2.5 million in 1997 when the discussion for a new city hall began almost 30 years ago.

City staff are currently located in three buildings, which means the city manager needs to pay three rents, three insurances, and no one can easily coordinate which creates an unnecessary administrative burden.

This is part of the need that city manager Leila Aman wants to address by bringing the City Hall project to fruition. The process kicked off with a city listening session on August 29, 2022, where the city manager presented the need, the potential scope of work, and the team that would help guide the city and residents through the initial stages to a 30% design phase.

The city has contracted with Bearing Architecture, a design firm familiar with the area having designed other local projects.

One of the key takeaways from the meeting was the need for transparency. City staff and residents really want to make sure that the process is as open and transparent as possible, and the city wants to be responsive to the communities needs and wants. No one wants to design a building that residents would reject for cost, aesthetics, or function.

The proposed new location is on an empty lot currently owned by the city on Manzanita near highway 101, across from the Fresh Foods. The site is currently being used for the Manzanita Farmers Market in the summer but is otherwise a formally unused space. There are very few open flat areas that are outside of the tsunami hazard zone, and this flat area also happens to be an assembly site for an earthquake or other large event where people are displaced from their homes, and is also already owned by the City.

The main goal of the first meeting was to work with local residents to determine what main ideas need to be included and which don’t make sense for Manzanita. For instance, Ms. Aman emphasized the importance of a fully functional meeting hall to limit staff overtime for public meetings, but Manzanita also needs a new police station. Ms. Aman also wants to design a building that will last well past 30 years so that the discussion doesn’t immediately come up again in the near-future.

In addition to the table listening sessions where residents expressed a need for transparency around costs, there was also a sticker session where residents could express interest in general design concepts to help guide the architects leading the project.

If you were unable to attend the Town Hall meeting on New City Hall, please visit the City’s website and view the presentation from the meeting and provide your feedback. Just click here the “City Architecture Survey & Town Hall Recording” button to find a link to the presentation and the survey. The survey will be live until September 9th at 5pm.
You may also use the following direct link: https://ci.manzanita.or.us/survey/

There will be two more meetings where the public can provide input into the process and project, stay tuned for more information.