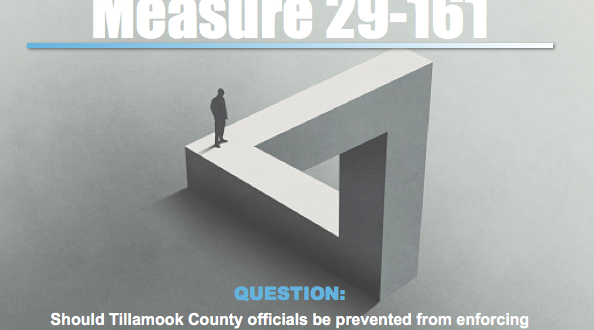 As a 51 year Tillamook County voter, I like to be educated on the candidates and issues that I cast my ballot on in every election.  The May primary ballot deals with significant issues.

This article is the first in a series looking at the proposed “sanctuary ordinance”.  Today, I look at the text of the proposed law and the responses to my questions by the chief petitioner, Mark Torrence, of Tillamook (see below).  The Pioneer will be publishing subsequent stories to look at the views of a group in opposition of the measure “A Just Right”, which has established a website and is raising money for the campaign, https://ajustright.org , and the responses of local law enforcement and other voters. I strongly encourage everyone to read the entire ordinance to be an informed voter.

This initiative attracted enough signatures to place it on the ballot, and seeks to make new law. Being a voter and gun owner, I thought I’d a get a copy of the proposal and ask some questions. A full copy of the proposed ordinance is found HERE.

As a retired lawyer and judge, I am seeing contradictions, vague terms, and some generally unenforceable and questionable provisions.  The proposal seems to be a solution in search of a problem.  I haven’t discovered the rationale for adopting this as law, except to perhaps be a public expression of wanting to have “liberty”.  That begs the question of whether we want to live in a society with both liberty and responsibility, under the rule of law.

The proposal appears to prohibit “extraterritorial acts”, which would be a new term in Oregon law.  Throughout the proposal, many such “acts” are outlawed, but then there is a laundry list of exemptions as to what is a prohibited “extraterritorial act” by an “officer” of the county.  The proposal is silent about the roles of city and state police, as well as prosecutors and courts.  Apparently, a police officer can still carry out their duty, even if some actions are “extraterritorial”.

We are citizens who hold dual citizenship. We are both citizens of the nation and citizens of Oregon. We have both federal and state guaranteed rights and legal responsibilities. Federal law is superior to state law (see, the federal constitution’s Supremacy Clause), and state law is superior to local government law. This system of law is what exists in our federal republic, and voters in one county can’t pick and choose what laws they are governed by.  That was one of the lessons of the Civil War.

Citizens and law enforcement don’t get to choose which laws we are going to follow, and which laws are to be ignored, as “extraterritorial acts”.

The proposal appears to ban most governmental actions regarding firearms, but then, in other sections, allows for concealed weapons permits, criminal background checks, the seizure of firearms involved in criminal activity (all of which involve the police doing background checks), and in court proceedings where one’s possessory rights to firearms can be restricted. Which is it, prohibited or exempted? Do we have criminal background checks for gun buyers and prospective teachers and cops? Do we prohibit convicted domestic violence perpetrators and felons from having guns, or is that an “extraterritorial act”? The proposal both gives and takes away. Officers trying to do their work, and comply with their oaths to uphold both federal and state constitutions and laws would be dealing with a regulatory ball of string.

Then, there’s the enforcement sections. A person who purportedly commits an “extraterritorial act” can be a defendant in a civil lawsuit.  This is a “bounty hunter” section. Apparently anyone can be the plaintiff, and bring a lawsuit under this proposal. They can be awarded their attorneys fees and court costs, and presumably an award of money for damages. I’m not sure how those damages are defined or calculated, or if more than one person can file a lawsuit for a particular “extraterritorial act”.  Who becomes the “injured party”?

Another section declares a breach of the proposed law a “Class A violation” but cites statutes that makes it a county ordinance violation, which is quasi-criminal. The violation would carry a $4000 fine, $10,000 if the defendant was a corporation.

Does the proposal set up a defense for someone’s criminal act, who can claim that the work of the police was an “extraterritorial act”, and the defendant should go free? I don’t know, and the proposal is silent.  This law would be a mess for the courts to sort through, aside from the Constitutional arguments. The practical mechanics of what all this really means would be a legal nightmare.

My questions and the answers of Mr. Torrence are as follows:

Why is this ordinance needed?

This ordinance is needed in an attempt to stop the removal of our God given rights. I believe it is incumbent upon all Americans to prevent just such actions by our state and federal politicians.

What is the purpose of this ordinance?

‘The intended purpose is exactly that. Our God given rights as individuals are being slowly and systematically removed by our government. It is most certainly a band aid to stop the bleeding but at this time I believe it is our only tool short of open rebellion.

Why are you supporting this initiative measure?

“ I support this measure because as a voter I have no confidence in our current voting systems. I believe that our current state legislature has an agenda and under no circumstances do I trust them to do what is right for us as individuals nor our society.”

Would concealed weapons permits still be needed for people wanting to carry concealed guns in public?

“Yes they would. This measure in no way changes our current laws.”

Would the concealed weapons permit process and the training requirements change?

“Again yes the process would remain as it is.”

How would the police enforce the ordinance?

“It would be enforced exactly the same way they enforce all the rest of our laws.”

How would this enforcement work affect the work load of the police for their other responsibilities?

“I believe any possible increase in work load would be minimal.

Are there county budgetary implications with this ordinance?

“ I would suppose if there are “budgetary considerations” they would also be minimal.

What other laws should be selectively enforced? How should that be determined?

“Personally I don’t believe ANY laws should be selectively enforced.”

“The process for getting this on the ballot started in December of 2019. It took almost 2 and 1/2 years partly because the system for getting a measure on the ballot is so complicated that that is how long it took one individual to wade through all the requirement’s and gather the required number of signatures to get that done.

“Mr. Lemery, I am just an average guy who has lived here for many years. Over the last several years it has become plainly apparent that our current legislature not only has an agenda but they are clearly willing to do anything they have to to accomplish their goals. The current state of Portland is clear evidence of this. I believe it is up to us as individuals to prevent the perversion of our constitution and the destruction of our way of life. THAT is why I took on this goal. Let US as voters decide! Mark Torrence”

Oregon’s Attorney General has raised some questions about similar proposals in other Oregon counties and followed up with the filing of lawsuits.

“Gun safety laws exist to help keep guns out of dangerous hands and keep people safe.  A county commission simply doesn’t get to override state law in this way,” said Attorney General Ellen Rosenblum. “The laws of Oregon remain fully in force – and fully enforceable – notwithstanding these invalid ordinances. No officials should be frightened out of properly doing their jobs by the threat of illegitimate criminal charges or bogus lawsuits. These actions [lawsuits] will hopefully send the message that we are prepared to preserve the rule of law across our state.”

For more about measures and candidates, see the Facebook group MooVoter.

Next: The opposition’s point of view and some responses from local law enforcement and other voters.