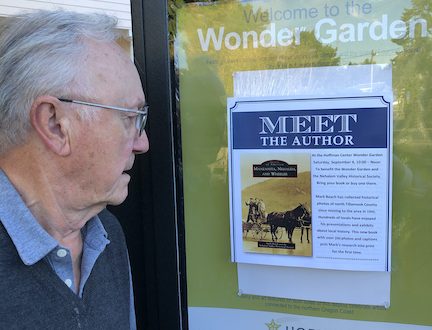 Manzanita author Mark Beach will host a sale and signing for his latest book “Images of America: Manzanita, Nehalem, and Wheeler” Saturday, Sep. 4, from 10 a.m. to noon, at the Hoffman Center’s Wonder Garden in Manzanita.
Beach is a widely acknowledged and appreciated historian of the Nehalem Bay region. A civic champion and community builder, he was named Manzanita’s Citizen of the Year for 2019.
The book features 213 historical photos with many anecdotes and facts about the immediate area, from the First People to the first hotel.

According to Beach, government surveyors started plotting land on the coast in the 1850s. “The Homestead Act of 1862 turned the trickle (of settlers) into a flood after the Civil War,” he said. Fifty years later, lots on Neahkahnie Mountain were going for $1,000, with ads boasting, “the most delightful natural beauty spot on the Oregon Coast!”

Beach is a retired historian who moved to north county in 1992 and has since collected historical photographs for the Nehalem Valley Historical Society. Over the years, many locals have enjoyed his presentations and exhibits about local history.

Proceeds from the sales of the book benefit the Nehalem Valley Historical Society and, during the Sep. 4 event only, the Wonder Garden.
Here’s Pioneer interview and reading with Mark Beach.